Any port in a Stormont: Why the DUP must be helped down from their Protocol petard

As we say in Belfast, ‘ats us nai’. The ballots are counted, the results are in and while the outcome might be seismic, don’t expect very much to change. Such is the reality of power sharing, a system designed to keep everyone sweet but no one happy. 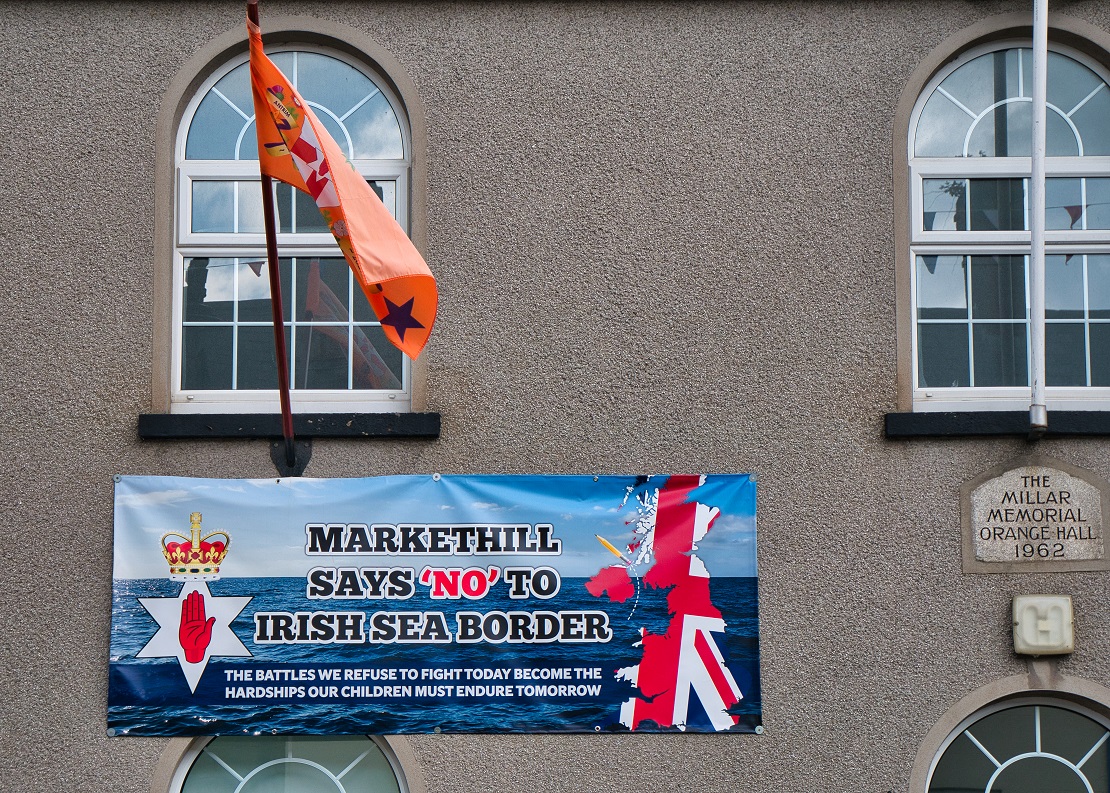 The key takeaways: After votes lost to the even more hardline TUV (Traditional Unionist Voice)  came back to them as candidates were eliminated, the British unionist DUP did not do as badly as some were predicting, dropping from 28 seats out of 90 to 25. Pro Irish Unity Sínn Féin became the largest party in the Assembly as anticipated but defied expectations by increasing their share of votes on their 2017 election total which many had assumed to be their high water mark. And the ‘surge’ from the cross-community Alliance Party materialised, who along with securing 13.5% of first preference votes, jumped from 8 seats to 17, badly squeezing the nationalist SDLP and unionist UUP.

So where does that leave us? Exactly the same place we were  before the election. The DUP will be in no hurry to restore power sharing, ostensibly until their grievances over the Northern Ireland Protocol are addressed. That it also means a perpetual delay to that first joint press conference where they’ll be second fiddle to a nationalist First Minister is just a bonus.

While it is likely that yet another lengthy Stormont suspension is on the cards, it’s hard to downplay the landmark symbolism of a nationalist party becoming the largest for the first time in Northern Ireland’s 101 year history. And while Sinn Fein will almost certainly use it to further their calls for a border poll, the chances of one happening anytime soon could remain slim.

The vote share for parties who campaign for a united Ireland has hovered at around 40% since 2010 with Sínn Féin’s gains mostly coming at the expense of fellow nationalists SDLP. This election was no different, meaning that even if he was an honest broker, Brandon Lewis would probably decline any such request and under the Good Friday Agreement, holding a vote on a united Ireland is entirely his call.

What is not in doubt is that the parties who campaigned on protecting the Northern Ireland Protocol saw their total vote share and seat count increase. Combined, they won 56.2% of first preference votes and 53 seats out of 90. If you include the Ulster Unionist Party who oppose the Protocol in its current incarnation but have called for its reform rather than its removal, this jumps to 63 seats and 67.4% of the vote. Compare that with the DUP and TUV who won 28.9% of first preference votes on a platform of scrapping the Protocol wholesale with no proposed alternative.

It is the clearest evidence yet that despite the panto protests from the DUP and the Conservative government, people in Northern Ireland want the Protocol to stay. They want to end the politicking over the issue which has meant critical uncertainty for the six counties since 2016.  Any move by the Westminster Government to unilaterally change the arrangement will be in direct violation of the expressed wishes of the people of Northern Ireland, but then again, they do have form here.

The other issue is that neither the Westminster Government, the DUP nor the TUV for that matter, are being straight about how we got the Protocol or what should replace it. The Protocol exists for the sole purpose of preventing the need for a hard border in Ireland after Brexit and we who advocate the need to keep it accept that it's not perfect. We didn’t want any checks anywhere, but after the Conservatives and DUP supported Brexit and scuppered any form of it that would keep borders invisible, the need for checks became inevitable. The Protocol was agreed as the least worst option compared to customs checks along Northern Ireland’s 500km border.

It bears repeating at this point that Northern Ireland voted to remain in the EU and Boris Johnson described the protocol as a “great deal”. But it is clear that he is now eyeing up another Rees-Moggian Dover gambit; get rid of the Protocol simply by not enforcing it and while the EU were perfectly placid about Britain importing potentially dangerous produce, they will not countenance traffic in the opposite direction. This is probably Johnson’s cynical calculation; create the necessity for a hard border, then blame it on the Eurocrats.

For the headbangers in the DUP and TUV, this might sound like the ideal outcome. A hard border at last between them and the Irish Republic. But they should be careful what they wish for. The beauty of the Good Friday Agreement from a unionist perspective is that it made nationalists, even the armed ones, accept Northern Ireland’s place in the United Kingdom. Not only that, it made so many Nationalists comfortable with the arrangement that the constitutional question faded into the background of day to day politics. A hard border would make life unbearable for the mainly nationalist border communities from Down to Derry and cripple economic growth. It would lead more people to consider the benefits of a united Ireland, within the EU and diminish the case for the Union.

Conversely, the Protocol offers real opportunities if businesses are given certainty. While the threat of diverging regulations must be addressed by improvements to the overall Brexit deal, with one foot in the UK and the other in the single market, Northern Ireland could become a magnet for investment. Singapore-on-Lagan. For the first time in generations NI could economically stand on its own two feet. But the DUP have a prodigious ability for doing exactly what is simultaneously worst for them in the long run and for the people of Northern Ireland. They cannot resist snatching defeat from the jaws of victory when there’s a chance to whinge.

Today it is being reported that Truss is preparing to pull the plug on the Protocol as early as next week. We can only hope that Johnson realises the foolishness of such a move before he crashes into this particular beehive like a sleazy Winnie the Pooh. In that scenario we’re all snookered. But if cool heads prevail that still leaves NI without a government until the DUP feel like enough has changed for them to begrudgingly reenter government as junior partners. To this end, they must be offered some way to save face.

First, call the Protocol something else. The Stormont Settlement, the Antrim Arrangement or  the Ulster Entente. That last one may be too French but you get the idea. It’ll give the DUP a way to argue with a semi-straight face that they got the Protocol scrapped and will help them accept the way things are, thanks in no small part to their own political ineptitude (but don’t mention that).

Second, the government must make the kind of changes to their threadbare Brexit deal which will help remove the bulk of checks on goods going between NI and GB. Things set out by the UK Trade and Business Commission like a veterinary agreement and standards protections will not only reduce the need for checks in the Irish Sea, it will help reduce costs for British businesses and consumers during a cost of living crisis. However, as this outcome hinges on this Conservative Government doing what is in the interests of Northern Ireland, missing a bust-up with Brussels and protecting jobs and standards in Britain, we mustn't hold out much hope.

The history of Northern Ireland teaches us that triumphalism and rubbing people’s nose in it gets us nowhere. Indeed it can be dangerous. The DUP may have got themselves into this mess but we are all in it with them until we find a way out. The frustration may induce stomach ulcers but it’s in all our interests to get them off this hook.