Best for Britain have launched an advertising campaign aimed at persuading those who are undecided on Brexit to support staying in the EU ahead of a final say on Brexit.

The campaign, called ‘Where We Stand’, will fight the negative portrayal of Europe and the European Union which has characterised UK political debate in recent years.

It will make the positive case for Europe which the official 2016 Remain campaign, and all other national anti-Brexit campaigns since, have shied away from.

The UK has received billions of pounds worth of investment since joining the EU, with almost 20 billion pounds invested since 2016. Even Dominic Cummings, the Prime Minister’s controversial anti-EU aide, is the co-owner of a family farm which has received 235,000 pounds in EU subsidies.

By highlighting the legacy of European investment in the UK, Best for Britain will seek to remind people that Europe stands with us, not against us, and has been a critical factor in some of Britain’s proudest achievements.

To achieve this, ‘Where We Stand’ will harness video assets, images and leaflets over the course of the next month.

Roll out of the campaign began last night with social media videos highlighting the success of important UK projects which have benefited from EU funding. The videos, which feature case studies such as the Eden Project in Cornwall and the Wildlife Trust in Lancashire, received widespread praise from MPs, including David Lammy, Tim Farron and Jo Stevens.

The campaign will also feature projections onto recognisable landmarks across the UK, beginning next week in Manchester to mark Conservative Party conference. The projections, which will also appear in Bradford, Stoke, Swansea and London, will question the absence of a government plan to replace the significant levels of EU funding in the UK. 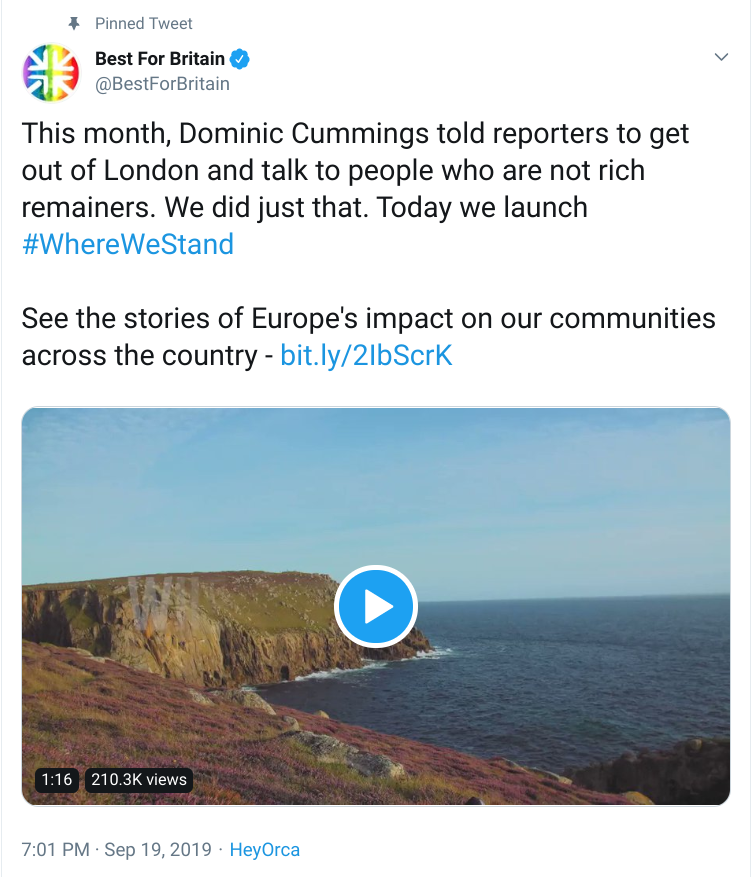 “Dominic Cummings said earlier this month that remainers need to get outside of London to speak with real people - so we’ve done just that.

“It turns out there are some beautiful and heart-warming stories of lives being changed by investment from Europe.

“Some of this country’s proudest achievements, including the Eden Project and the Wildlife Trust, rely on European funding.

“This campaign will amplify those stories to make the case that staying with Europe would be a much better outcome for our country than leaving - particularly if we crash out without a deal.

“With the government spending millions promoting Brexit propaganda, it’s important that voters get to hear how Europe stands with us, in our communities, across the length and breadth of the UK. This campaign will do that.”

You can find out more about EU funding at the European Commission's website. Or to find out about where EU funds go near you, check out MyEU.uk's interactive map.