Best for Britain is urging the Government to "commit to a level playing field with the EU in order to unlock further concessions" as a new poll shows just one in ten Brits want to cut EU regulations on jobs, food and the environment after Brexit.

The study, undertaken for Best for Britain by polling company YouGov, asked those surveyed whether they thought Britain should apply ‘the same’, ‘stricter’ or ‘more relaxed’ standards in the job market, the environment and food and product safety. 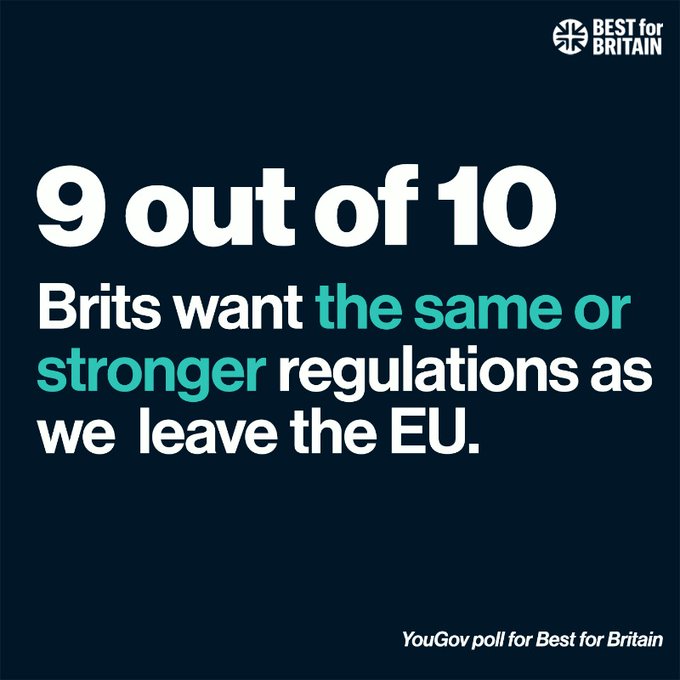 While Britain's top negotiator used a speech in Brussels last week to reject the kinds of “level playing field” conditions that Paris and other capitals insist must form the backbone of any future-relationship agreement, our poll shows that Brits overwhelmingly reject any relaxation of standards in key areas.

With reports this week that the EU will demand that Britain retains its ban on chlorinated chicken ahead of negotiations with the US over a trade deal, our poll shows that only one in ten people think Britain should seek to relax food and product safety standards from the current EU-set standards. Half of those who responded said they wanted to maintain current levels of regulation in this area (49%), while over a third thought the rules should be stricter (37%).

On the environment, where the EU fears regulatory divergence could lead to Britain undermining its flagship ‘Green New Deal’ programme, respondents were eager to see higher levels of regulation. While around a third of respondents said they would like standards kept the same (28%), twice as many people thought standards should be made stricter (57%).

In the context of public opinion rejecting looser regulation as we leave the EU, Best for Britain believes that the issue of control over those standards is a red herring that will hold back negotiations – stricter standards can be applied having committed to "level playing field" conditions. With the EU repeatedly stating that UK acceptance of "level playing field" commitments is a precondition of comprehensive trade deal, we are urging the Government to "commit to a level playing field with the EU" as a way to "unlock further concessions and help Britain secure the best possible future relationship."

The call comes during an important week for UK negotiators, with the EU General Affairs Council having thrashed out its negotiating demands yesterday and the UK Government expected to publish its own mandate tomorrow.

"What this study shows is that Britain overwhelmingly rejects looser rules as we leave the EU.

"Across all regions, age groups and political affiliations, people agree that standards should be kept or even strengthened, not rowed back on.

"This is a powerful rejection of the idea that Britain should undercut its neighbours on regulation to do with things like food hygiene and protecting the environment.

"The Government must listen to what people are saying and commit to a level playing field with the EU in order to unlock further concessions and help Britain secure the best possible future relationship."