Voters overwhelmingly want the Government to seek an extension to Britain’s Brexit transition period, as the logistics crisis at Dover spirals out of control.

New data shows supporters of an extension outnumbering opposition by more than two-to-one, and that support is consistently high across the country.

The polling, commissioned by campaign group Best for Britain and conducted by YouGov, was carried out at the end of last week – before the latest Covid wave saw Dover closing and many flights from Britain halted.

It also shows support for a trade deal remains high, even among Conservatives. 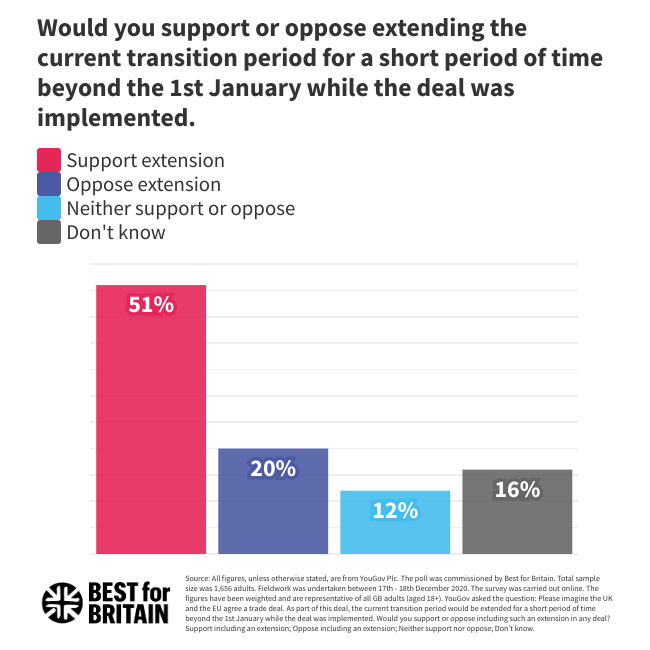 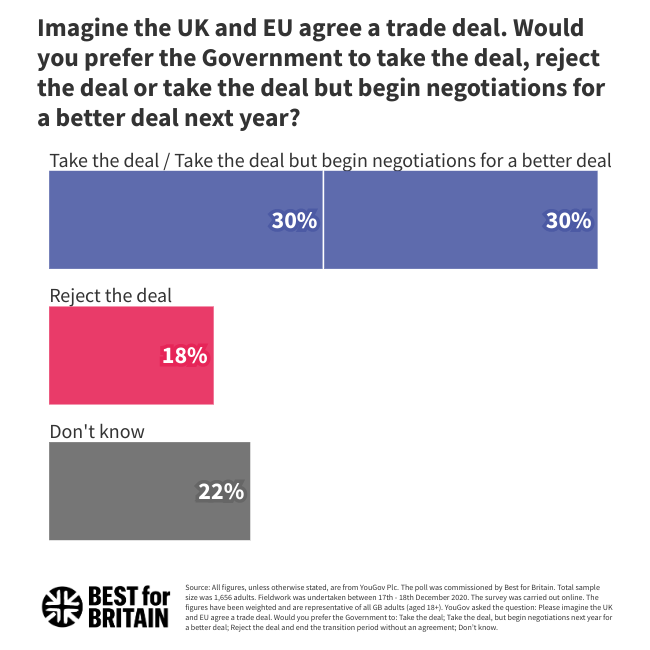 ‘Voters know what the Government is refusing to admit – we’re out of time. Our major trade route with our biggest trading partner is shut, international travel is being choked off and yet everything is supposed to be ready for an orderly exit from the EU on January 1st.

‘Businesses still do not know what to expect in the new year – but are somehow supposed to be ready to react when vast swathes of the country are under lockdown, and Boris Johnson’s prevarication has introduced a whole new level of chaos to Christmas planning.

‘The Government is not living in the real world. In the real world, businesses are breaking as we speak, and neither business owners, employees nor anyone else has the information or capacity to deal with a cliff-edge Brexit and a Covid catastrophe come January.’

The polling also shows that almost two-thirds of voters want to see a UK-EU trade deal and, of those, half want it to be followed by negotiations for a more comprehensive arrangement.

It suggests failure to achieve a deal will leave Boris Johnson facing serious questions from within his own party: roughly half of Conservatives support a deal, while just over a third favour no deal. 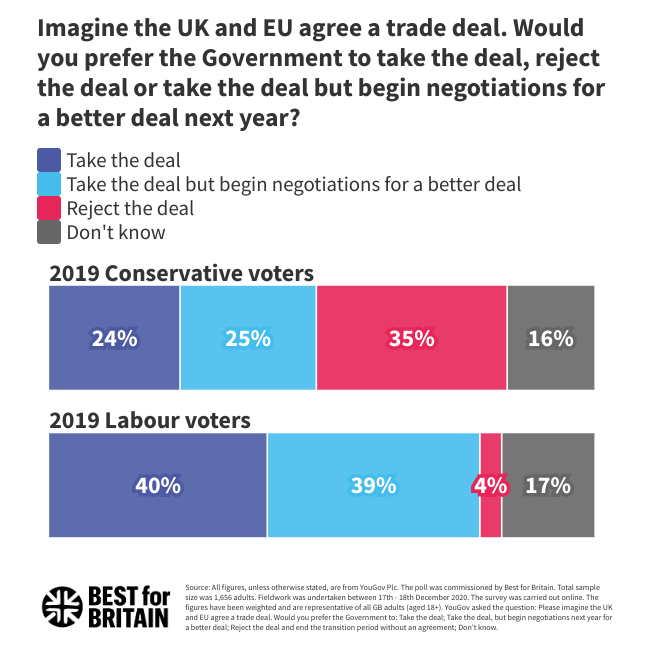 Only 18 per cent of voters back a no-deal outcome. Among Labour and Lib Dem supporters, that figure is a mere 4 per cent.

Even among Leave voters, more want an agreement than favour no deal. 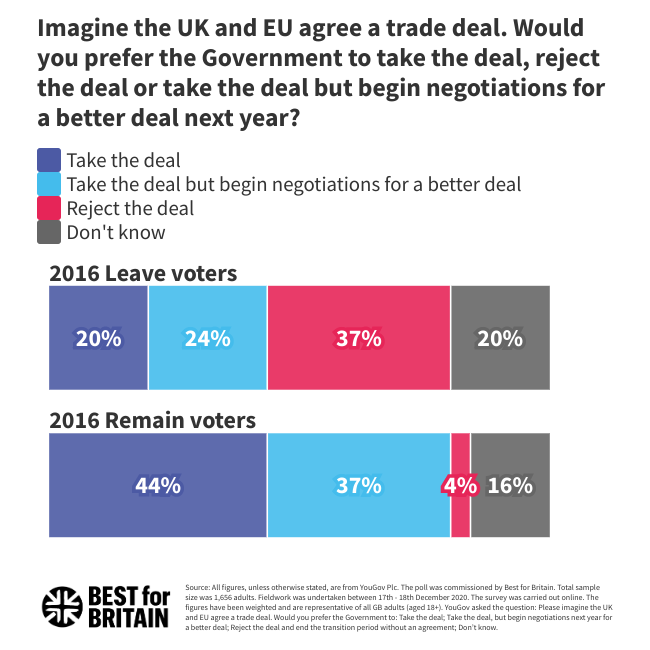 There is majority support for extending the transition period, with 51 per cent backing such an arrangement and only 20 per cent opposing.

Support for ‘extension’ is higher than ‘no extension’ in every part of the country, and among Conservative supporters. All age groups strongly prefer an extension. 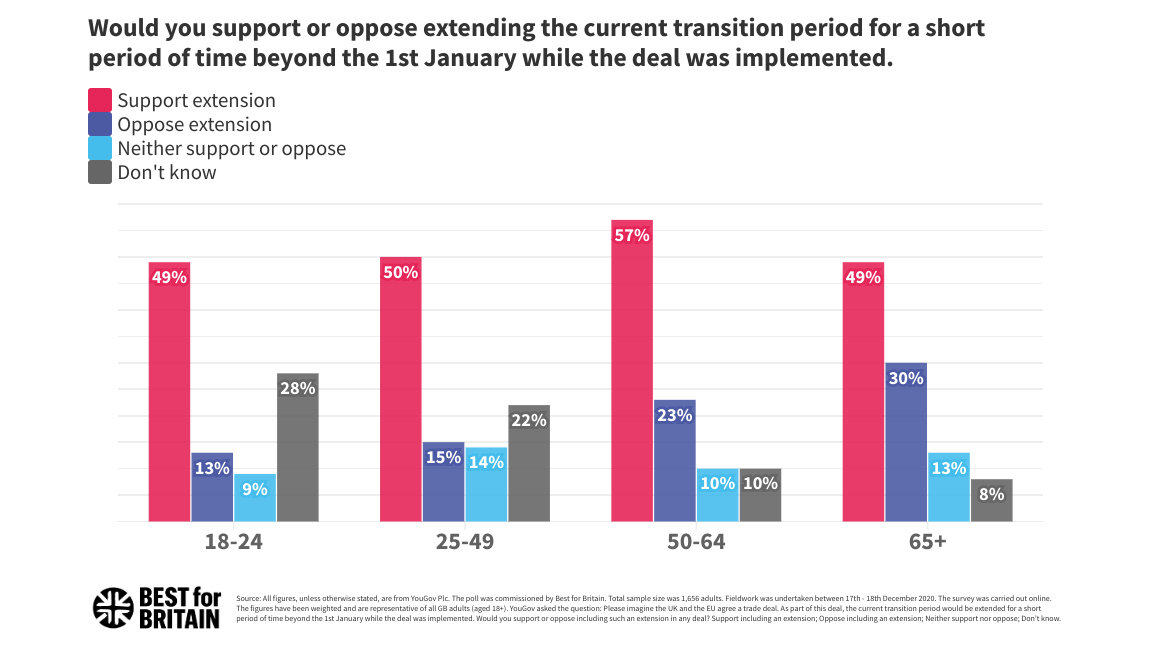 ‘Every part of the country, from Scotland and the Blue Wall to London and Wales, clearly wants the Prime Minister to keep the promise he made to strike a deal.

‘Even within his own party, which has wrestled with European issues for decades, supporters for a deal outnumber no-dealers by 49 per cent to 35 per cent.

‘From both a practical and political perspective, these figures show why Johnson and his team must now make a final Herculean effort to get an agreement over the line.’

All figures, unless otherwise stated, are from YouGov Plc. The poll was commissioned by Best for Britain. Total sample size was 1,656 adults. Fieldwork was undertaken between 17th - 18th December 2020. The survey was carried out online. The figures have been weighted and are representative of all GB adults (aged 18+).

Q1. Please imagine the UK and EU agree a trade deal. Would you prefer the Government to: Take the deal; Take the deal, but begin negotiations next year for a better deal; Reject the deal and end the transition period without an agreement; Don’t know.

Data tables can be viewed here.