DONATE: Donate: Fight back against unaccountable politicians and the erosion of our democracy

The Elections Bill has just finished its Committee Stage in the House of Lords - and things are looking up.

Thanks to all your campaigning on this issue, we are in a good position for the Report Stage, when amendments will be voted on and passages of the Bill can be changed.

The strength of feeling in the House of Lords is testament to how much we as campaigners have done, together, to put our concerns front and centre. Lords from all parties have seen just how much we all care about preserving our democracy.

Donate now to help us continue working closely with the House of Lords to ensure that the next stage of this Bill’s passage is as promising as the last.

17th January - Update: Government defeated in the Lords on the Policing Bill and Best for Britain's amendment passes.

The authoritarian Police, Crime, Sentencing and Courts Bill has come up against a significant challenge in the Lords, with multiple defeats for the Government. A series of new amendments expanding draconian stop and search and targeting individual protestors that the Government added to the bill in the Lords have been voted down and can now progress no further.

Many provisions in the bill that were introduced in the Commons have now been amended or removed, including Clause 59 which Best for Britain worked with peers across the House to amend. This clause would have made protest in Parliament Square illegal in its entirety; now the clause allows for such protests to take place should permission be granted by a relevant authority. This is a significant win, but it doesn't change the fact that this egregious bill still has wings.

The bill will soon return to the House of Commons where parts of the original bill that have been amended or struck out can be debated once more, and many of the most troubling aspects of the bill could be reintroduced at this point. We need to keep the pressure up so that we can sustain our challenge and protect our democracy.

Several bills currently passing through parliament threaten to undermine out democracy. Best for Britain is campaigning to see these bills amended or overturned.

A bill like the Elections Bill could silence charities, unions and campaign organisations like Best for Britain by changing the rules around joint campaigning. This could also diminish the power of progressive ideas by placing obstacles in the way of electoral pacts. The bill also grants increased powers to the Government and weakens the independent regulator of elections, the Electoral Commission.

In addition to reducing the power of civil society, the bill proposes to increase the power of Ministers to act unilaterally and decide which organisations can be proscribed from campaigning.

The Police, Crime, Sentencing and Courts bill is similarly authoritarian in nature, and will allow the Home Secretary to determine whether protest is acceptable or not. This bill attempts to invalidate and criminalise the most common conditions for protest and will enact a stifling of civil society.

We're also contending with the Judicial Review and Courts bill, which will weaken the outcome of judicial review decisions and stop the Government from being accountable to the courts.

In combination, these bills constitute an insidious power grab which will ultimately erode our democratic right to free expression and limit the potential for individuals across society to hold power to account.

Many of you have been appalled by the government’s attempts to clamp down on the right to free protest and you have helped us to raise over £40,000 in the fight for democratic rights. Will you help us continue our fight for better democracy and stop this insidious power grab by getting us to our £60,000 target? The more money that you help us raise, the more people we can speak to, the more ads we can run, and the more work we can do to prevent this bill passing.

Will you spare £10 in the fight for our democratic rights? 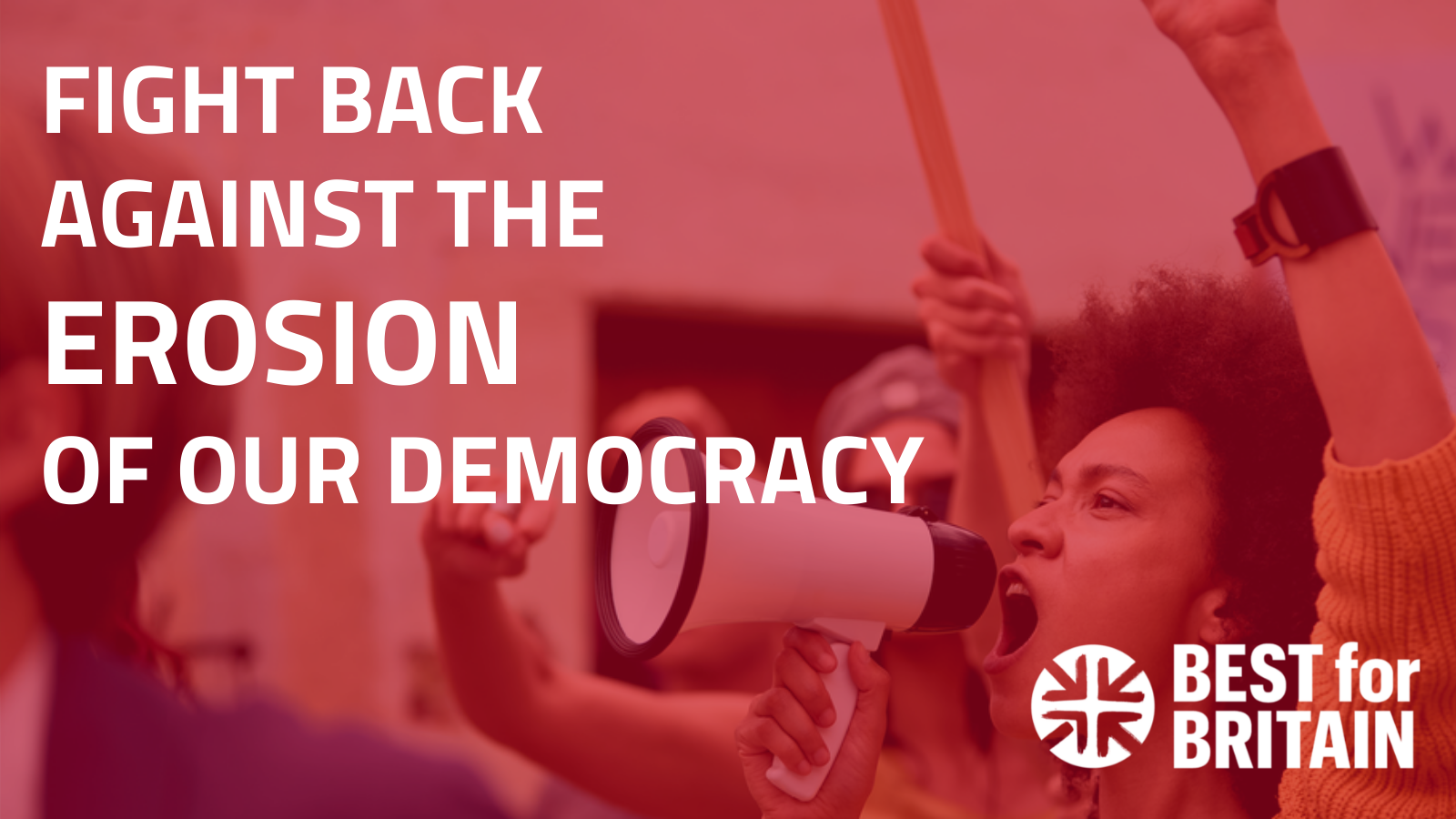 During regulated election periods the law says we must make sure all donations of £500 or more are from people who are registered to vote in the UK, or companies that are registered and conduct their business in the UK. That's why we ask for your address and a phone number. If the same person donates more than once and their donations add up to more than £500 in the same calendar year, the same rule applies. Donations over £7,500 must be published by the Electoral Commission. Donations we find to be inadmissible may have to be returned.

Outside of election or referendum periods we welcome donations from anyone who wants to help Best for Britain.