NEW REPORT - The state of EU-UK trade negotiations: is the Government measuring up to its promises?

In a major new report, The UK’s Negotiations with the EU on a New Trading Future - Aspirations, Benchmarks and Measures of Success, commissioned by non-partisan campaign group Best for Britain, Tim Ward and Namali Mackay provide the first detailed analysis of the government’s ambitions for a trade deal, and the realities facing their negotiating teams.

The Government in its 2019 Political Declaration and in its manifesto, promised free and frictionless trade with the EU on goods and services. A new report identifies the seventeen promises that the Government must fulfil to deliver the comprehensive deal we were assured.

Unfortunately, for many of these key promises, from transparent rules of origin laws to no tariff trading and the free exchange services, the UK faces an uphill struggle to deliver. Some issues, like fisheries, regulatory alignment and 'level playing field', are at complete stalemate, with the UK unwilling to compromise to get a deal. 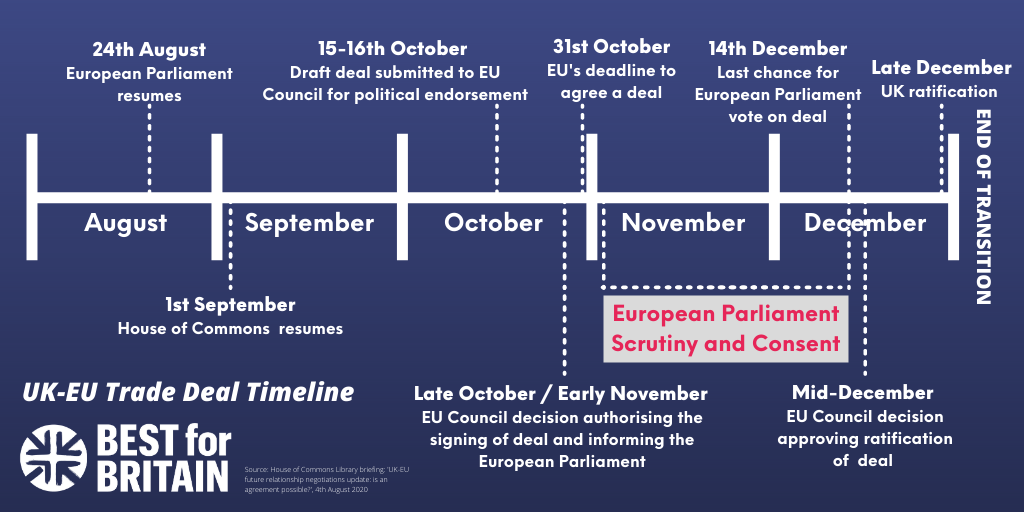 Working with trade experts, a new report by Best for Britain sets out the current state of UK and EU negotiations - and shows how far we still are from striking a comprehensive deal. Read the full report below

Breaking down the negotiation into the trade of goods, the trade of services and 'stalemate' issues, the report outlines the challenges faced by both sides, and the benchmarks for a successful deal.

These negotiations are different. Usually, a free trade agreement brings two nations closer to together to allow easy trade. But in these negotiations, the UK and the EU are both splitting apart, and then trying to rebuild their partnership. The report makes it clear, the Government has overpromised, and is on the path to underdeliver. We call on the Government to urgently pursue a full and comprehensive deal with Europe which fulfils the promises it made to the British people.

As the deadline draws closer for the United Kingdom (UK) to strike a deal with the European Union (EU) before the end of the transition period, the condensed timeframe and the unforeseen social and economic circumstances of 2020 have placed the parties under unprecedented pressure to conclude a deal – and to do this quickly.

The challenges of 2020 aside, it is now well understood that this was never an ordinary bilateral negotiation. Not only did it extend significantly beyond a standard trade deal, it also moves in the opposite direction by separating systems rather than trying to merge systems together which is the norm in Free Trade Agreements (FTAs). Therefore, the political dynamics, potential impacts of the proposed changes and the negotiations themselves will be significantly different to any previous trade deal on record.

The potential impacts in particular are worth considering. In usual trade arrangements two or more parties come together to build upwards from their current trading base. Any gains from the deal generally add to each party’s status quo, improving the competitiveness of a party’s exports within the partner’s markets.

In this trade deal, the status quo will be dismantled and re-arranged in many sectors and as a result there will be significant change and cost – borne by producers and consumers of goods and services on both sides. The objective of these negotiations therefore should be to agree on arrangements that minimise the change and costs as much as possible and maximise future opportunities.

In that context, this report aims to objectively highlight what the UK has committed to achieving through a future trade arrangement – looking especially at the most important areas of goods and services trade for the UK.

In the trade of goods, the report looks at what the UK has stated as its aims in each of tariffs, quotas, rules of origin, customs and trade facilitation measures as well the non-tariff issues of Sanitary and Phytosanitary (SPS) measures
and Technical Barriers to Trade (TBT).

Similarly, on the services trade side the report assesses the UK’s commitments to its key interests – cross border supply of services, financial services, digital services, road transport services, the movement of people for business purposes, mutual recognition of professional qualifications and audio-visual services.

Finally, we take a brief look at the UK’s position on the issues which have proven to be sticking points in the negotiations to date – level playing field provisions, state aid and a fisheries arrangement. In setting out the UK’s aims on all of these areas, the report looks at what the practical implications are of these positions and the dynamics in the negotiations, drawing on precedent in other FTAs.

Read the report in full here