A landmark new report into undecided voters suggests that despite the Labour Party’s consistent 20 point lead in the polls, it would only deliver them a parliamentary majority of fewer than 60 seats. 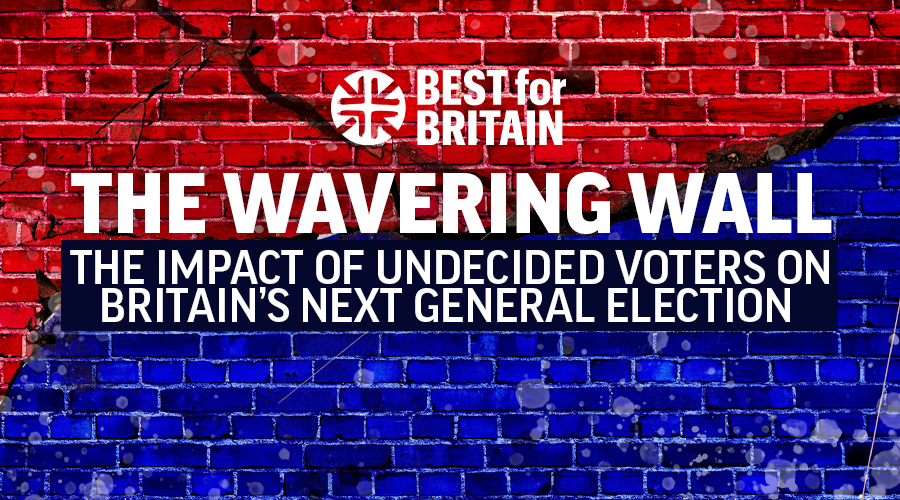 A 10,010 person MRP poll by Focaldata taken around the resignation of Liz Truss and updated with a 2,000 person MRP poll after Rishi Sunak became Prime Minister, showed that the Labour Party’s current lead among voters would secure them more than 500 seats in a General Election, echoing the forecasts of many other recent polls.

However, many seat projections do not factor in people who respond ‘Don’t Know’ when asked how they intend to vote at the next election, despite relatively high numbers choosing this option over the past few months. In the top up poll by Focaldata, 10% of respondents said they were unsure who to vote for.

Now, new analysis of this ‘Wavering Wall’ by internationalist campaign group Best for Britain suggests that the bulk of undecided voters are likely to be timid Tories as these respondents closely resemble the age and education profiles of people who say they intend to vote Conservative. The analysis also found that areas where there are currently higher numbers of wavering voters previously had a strong Conservative vote share and that there is a strong correlation between a reduction in the prospective Conservative voters and the growth in wavering voters between the beginning and end of 2022.

The vast majority of these wavering voters (85%) say they would vote at the next General Election. When Best for Britain redistributed these wavering voters to other parties proportional to their age and education profiles, and taking into account the current popularity of the Westminster parties, Labour’s projected election result is slashed from an unassailable 517 seat super majority to a much more fragile 353, a 56 seat majority.

With many predicting that Labour's current 20 point lead is unsustainable potentially two years out from an election, the research suggests that any narrowing of the polls which results in Labour losing only 26 of seats they are currently projected to win would cost them victory when Britain next goes to the ballot box.

The findings come as new polling suggests that Keir Starmer is increasingly out of touch with Labour voters on Brexit, increasing concerns that he is alienating Labour’s current support when it is increasingly difficult for him to win support from the Tory-leaning Wavering Wall.

A new poll by Opinium on behalf of Best for Britain shows that of people who say they intend to vote Labour at the next election, more than twice as many (44%) say Keir Starmer is wrong to rule out the UK rejoining a customs union with the EU if Labour wins the next election compared to those who say he is right (19%). In July, the Labour leader came under fire for dismissing the move which would reduce costs for businesses and consumers during a cost of living crisis.

“These findings make clear that we who want to see the back of this nativist, incompetent, sleaze-ridden government can take nothing for granted.

“By removing trade barriers with our closest neighbours and removing his own red lines, in one stroke Keir Starmer can solidify his electoral support and throw businesses and consumers a desperately needed lifeline.”