NEW REPORT - Britain in 2021: A domestic impact assessment of the UK after exiting the transition period

In a major new report, non-partisan campaign group Best for Britain assesses the domestic impact of Britain leaving the transition period without a trade deal with Europe at the end of this year.

The report integrates exclusive, unreleased MRP polling conducted earlier this month with Best for Britain's collation of reasonable 'day one' no deal outcomes.

Polling reveals consumer confidence in the UK economy is at an all-time low. In so-called 'Red Wall' seats, those constituencies which were instrumental in the Conservatives' 2019 landslide victory, voters overwhelmingly report job losses and closures of local businesses. More than 2/3 of people in the totemic constituency of Workington say they have witnessed this downturn in their town. And just 8 per cent of these Red Wall voters report they will be spending more money in their communities this Christmas.

Drawing from the August 2020 report  ‘The UK’s Negotiations with the EU on a New Trading Future – Aspirations, Benchmarks and Measures of Success’, the report analyses the impact a no deal would have on 16 areas of trade in goods and services. From Scotchwhisky and the automotive industry to a shortage of vets, the report details key industries, professions and products which will be immediately impacted on day one of a no-deal exit.

Leaving the Brexit transition period is set to make it worse

Still time to get a proper deal with the EU 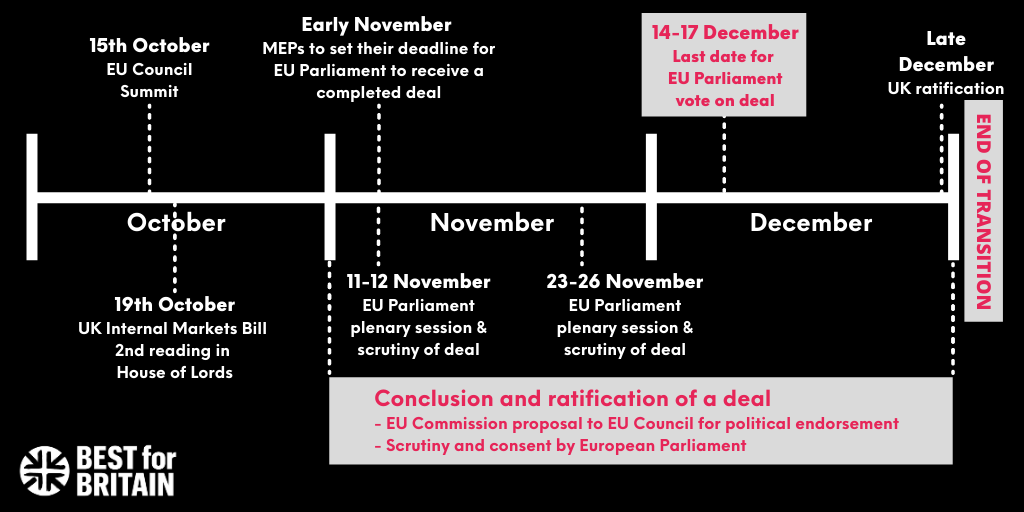 Change is coming. Whether the UK ends its Brexit transition period at the end of 2020 with a Free Trade Agreement (FTA) with the European Union, or fails to agree such a deal, introducing a new trade relationship with Europe from 1st January will have a negative impact on the UK economy, which will simultaneously be experiencing a coronavirus induced downturn.

In the event of no trade deal being agreed with the EU, or a ‘thin’ trade deal coming into effect at the end of the Brexit transition period, the impact on the UK’s gross domestic product (GDP) and on local economies will be much larger than if the UK were to agree to a comprehensive Free Trade Agreement. This will disproportionately affect so-called Red Wall voters who live in seats stretching from the North West to the East Midlands. Analysis by the Social Market Foundation for Best for Britain in June 2020 revealed that half of all local areas in the North West will be exposed to the highest level of risk – placed in Category 5 (the highest quintile of impact-risk) – with a further 40 per cent in the second highest quintile, because of their exposure to a double economic hit based on the Gross Value Added of sectors locally.

Using 16 areas of trade outlined in Best for Britain’s August 2020 document ‘The UK’s Negotiations with the EU on a New Trading Future – Aspirations, Benchmarks and Measures of Success’, this report assesses the multifaceted and wide-ranging sectoral impact of a no deal or ‘thin’ deal exit. From 1st January 2021, trade in goods and services is likely to experience severe disruption. This will be compounded by the Government’s lack of clear advice to industry or strategy in negotiations – in 2018 the CBI found 94 per cent  of businesses are struggling to prepare for Brexit because of a lack of information, while survey from July this year found three in four were concerned about further economic shock arising from a non-negotiated exit from the EU. Where goods are concerned, we anticipate, amongst other impacts, huge delays at the border, heavy administrative burdens on small and medium enterprises, and significant tariffs applied to imported staple food items and exported automotive goods. In the service sector, UK workers will face new and internationally varied immigration and professional regulations if they are to continue living or working in Europe, while businesses which provide audiovisual, financial or digital services in Europe will face significant barriers and administrative costs. The cumulative impact of all these formal and informal barriers to trade will be heavy.

On a local scale, the double economic hit of Covid-19 and Brexit is already being observed by voters in seats that were crucial to the Conservative Party’s victory in December last year. Best for Britain’s September 2020 constituency-level polling analysis of 44 seats, that switched from Labour to Conservative at the last election, shows local economic collapse has been clearly noticed among the electoral group (so called ‘Red Wall’ voters) that was key to the Tories’ landslide victory. In the totemic seat of Workington, 70 per cent of voters observed local shop closures and job losses in their area, growing to 74 per cent in seats such as Sedgefield and Don Valley. Our latest polling shows that the combination of Covid-19 and Brexit could form a 'perfect storm' for high street businesses this Christmas. A weaker pound, tariffs on goods, and extra red tape if we don't get a trade deal, could force businesses with limited reserves further into cashflow difficulties, while consumer confidence is at an all-time low. We therefore call on the PM to make good on his election promises and strike a Brexit deal that supports the country's economic recovery.