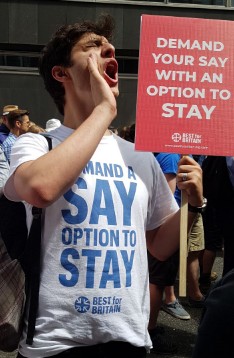 On Saturday, thousands of us will be travelling to London to join the massive march to call for a vote to give the public the final say on Brexit.

But on its own it won’t be enough. To stop a Brexit disaster, we need people across Britain to unleash a range of creative, local pressure tactics on their MPs before they decide how to vote. So we’re running a special Brexit workshop in London right after the march to plan the next stage of campaigning, share ideas for what you can do in your community, and meet others who want to stop Brexit, before it’s too late!

You can join the drop-in workshop any time between 3pm and 4:45pm.

Join the workshop and invite others from your constituency!