Baillie from York The Pilot Theatre

Baillie is a young man with big ambitions who’s lived all over Yorkshire. He grew up in a small town called Pudsey and when he wasn’t wiping down bar tops, cleaning up after punters as they argued about money, he was looking after his mum at home. 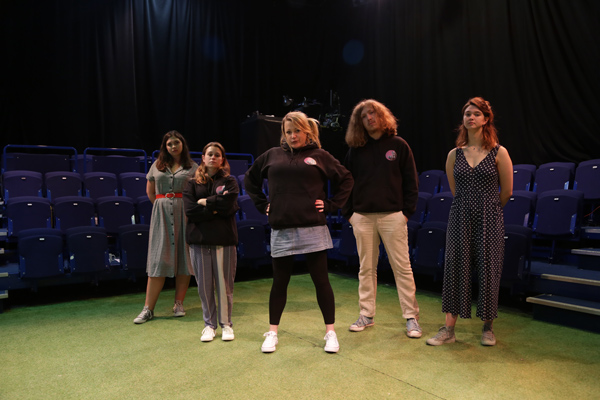 He describes his childhood as “boxed in” and “reserved” - a similar feeling for many young people today - and was always left wondering what more life could hold for him.

Just a year later, he's heading to drama school, which Baillie describes as "a leap of faith" that seemed "insurmountable" before joining the project. But thanks to 18 in 2018, Baillie and many other young people have been given a foot in the door and stoked a self-belief to realise their passion for the theatre.

18 in 2018 was funded by the EU and worked with young people who turned 18 in 2018 to create digital content in theatre. 18 in 2018 is one of the thousands of organisations and projects across Britain that is supported by Europe. 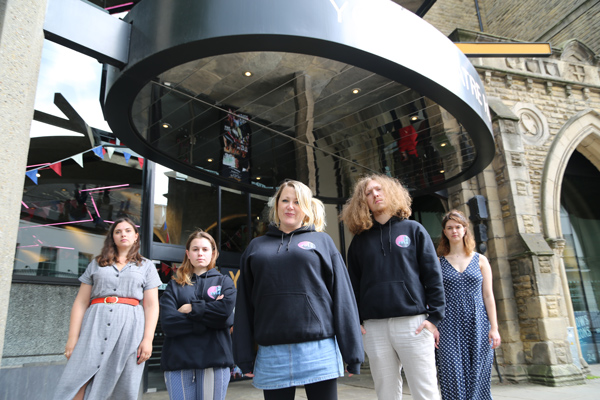 Hilary is a founding member of B-Arts, a charity based in Stoke-on-Trent that supports local people in communities in Stoke, the surrounding Staffordshire area, and even further afield. Hilary was one of three extraordinary women who spent her younger years travelling the country as a street performer, before coming back to Stoke and deciding to set up the charity in 1985.

Almost 35 years later, the B-Arts has flourished and has created countless programmes supporting thousands of people over the years, including young people, those who have become unemployed, and people with mental health problems. 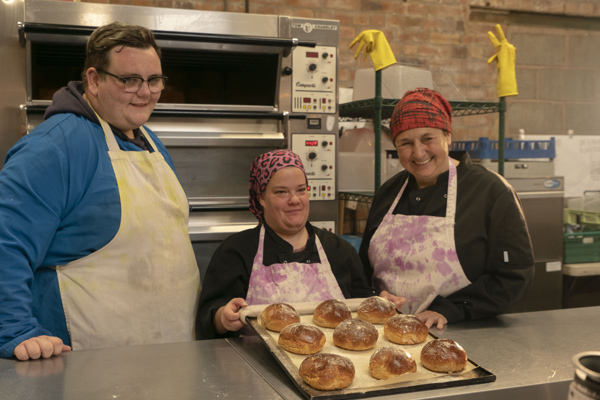 Over the years, Europe has helped them on numerous occasions by funding projects including Bread In Common, a full-time bakery where local people who have fallen out of work can come in, develop new skills, and rebuild their confidence.

Without continued support from Europe, there’s a real threat that programmes supporting young people will be under threat, unless the Government acts to replace the funds, something Hilary feels strongly about.

B-Arts has a vision of a society where everyone has an equal chance to take part, and by taking part can make change for the better in themselves, their place and their communities. Since 2016, they have engaged 25,361 people in arts projects and displayed their work to over 27,000 people. They aim to improve the lives of people and the places in which they live through creative and cultural interventions. B-Arts is one of the thousands of organisations and projects across Britain that is supported by Europe. 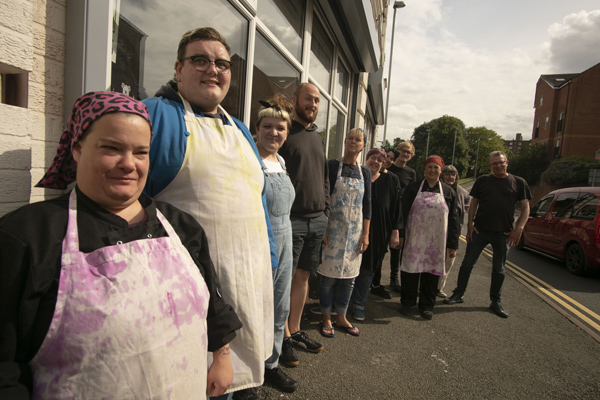 Europe stands with Hilary and B-Arts

Kari is one of the many youth workers at The Boys’ and Girls’ Club who has an exciting future ahead of her. But that wasn’t always the way - before joining the club, she was a shy girl from a large Welsh family. If she ever ran into any trouble, they were the people she'd turn to. At the Boys' and Girls' Club of Wales though, she found her second family. 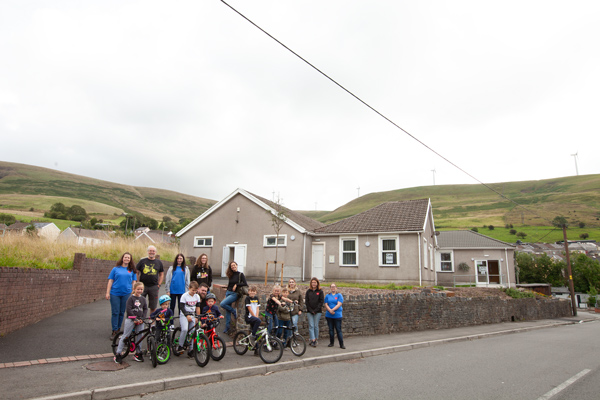 Alongside other girls like Rosie and Cathryn, the Club gave Kari a lot more confidence and she was soon leading projects, supported by Europe, and connecting with people she'd never dreamt of approaching before.

Her involvement in the club has even gone as far as to inspire her to get a degree and study social work, standing with those that need help. Without European support and the “welcoming and friendly, and supportive” environment the project created, she might never have found her true calling in life. 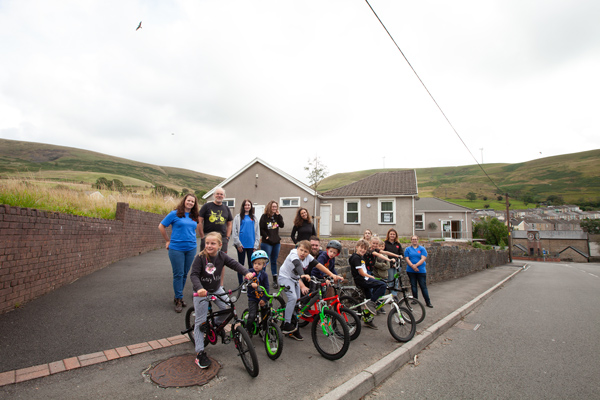 Born and raised in Newquay, Cornwall, Katie has been a gardener at the Eden Project for 8 years and is proud that Cornwall has managed to create such an incredible project to be a part of. She’s part of a team of people who are working together to safeguard green spaces for future generations, although she didn’t always want to be a gardener. 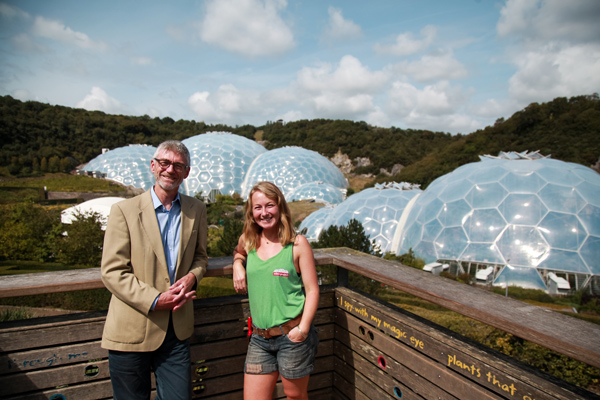 Before joining The Eden Project, Katie was a restaurant manager before realising she loved the outdoors too much and applied for their apprenticeship. Since then, she’s gone from strength to strength, spending her days working with a whole host of people from different backgrounds, all driving forwards with a common purpose: to connect people with the living world.

Since opening its doors in 2001, The Eden Project, has employed thousands of people in Cornwall just like Katie and has put St Austell on the map.

It currently provides jobs to over 400 people, the majority of whom are all local to Cornwall. According to Katie, none of this would have been possible without the support of Europe.

"We wouldn't have had the Eden Project without EU funding. [...] Would it have even got off the ground?"

The Eden Project is an educational charity, social enterprise and visitor attraction, featuring the world's largest captive rainforest. The project hosts over 1million visitors a year including 50,000 school children, and was partially funded by a European fund which has been crucial to its success. The Eden Project is one of the thousands of organisations and projects across Britain that is supported by Europe. 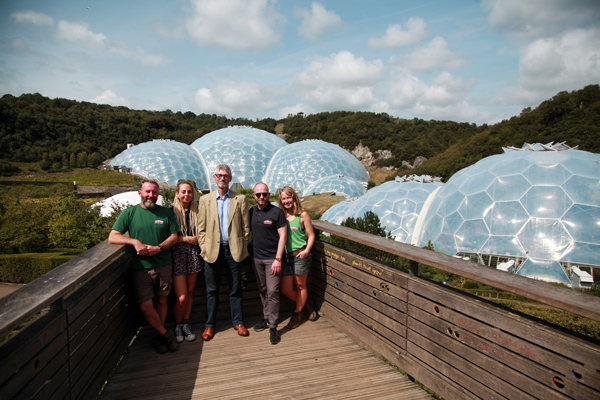 Europe stands with Katie and The Eden Project

Ben is a farmer born and raised in Herefordshire, where he still lives happily today. His family have lived in the area as far back as they can trace their history, although Ben likes to think that he and his husband John have found their own piece of land to leave their mark on. 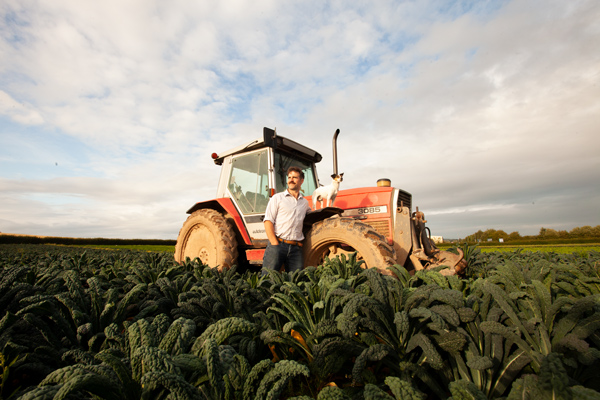 One of the main produce Ben farms is organic vegetables, which he sells in the region and further afield. Whilst feeding the nation is his core business, he’s also overtly aware of the environmental impact his farm has on the local habitat. Thanks to funding from Europe, Ben has been able to protect areas on the farm so that they are places where birds and insects can thrive.

Yellow wagtails, goldfinches, and "absolute swarms of butterflies" now populate the area, so that Ben can say; I stand with wildlife.

“Hopefully my work improves the lives of the people who walk on footpaths around the farm, hopefully it’s more interesting to look at, there’s more to see, and fewer fields of mono cropping.”

Ben farms organic fruit, vegetables, and livestock. Under the EU's common agricultural policy, he receives the single farm payment. He is also on the EU's mid-tier stewardship scheme, which funds measures to improve biodiversity on farms. Ben is one of the thousands of organisations and projects across Britain that is supported by Europe 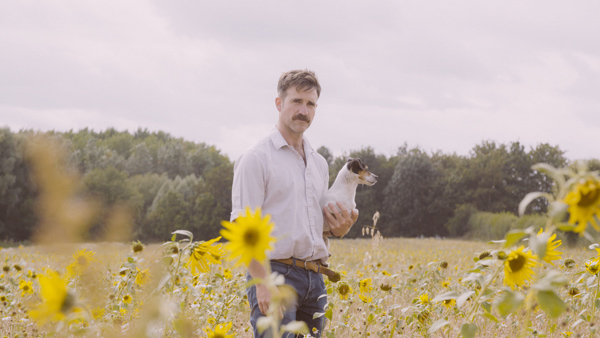 Michael is from Keighley, a town on the outskirts of Bradford, West Yorkshire. He admits it wasn't the easiest place to grow up, and his learning disability made his childhood even more difficult. 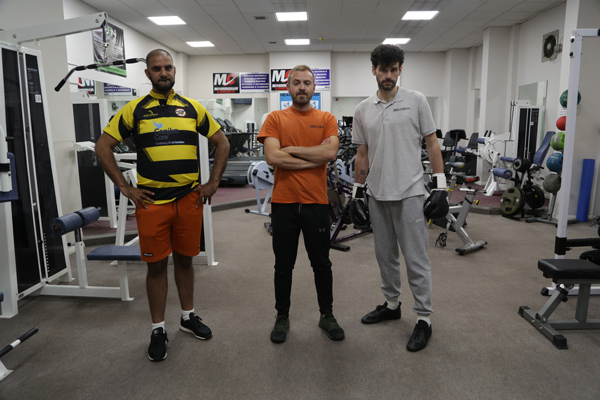 He joined IMAS’s Mixed Ability Training programme in Bradford to improve both his physical and mental health that have been affected by his disability - he’s now become a top boxer.

With support from Europe, the IMAS team have co-created specific educational resources with their participants to spread the Mixed Ability model further, particularly people who have been excluded from community sport clubs as regular members.

"If I hadn't come across this [project], I'd be doing nothing, bored out of my head. If I didn't come on this, I wouldn't be doing sports again, like I did when I was younger. [...] It's pushed me forward to getting new sports up and running, and getting people back into sports."

Now Michael wants to coach so that he can help other people use sports as a way of dealing with the challenges they face, from mental health to eating disorders. If European support is not replaced, the likelihood is that IMAS will have a lesser ability to reach the most vulnerable. 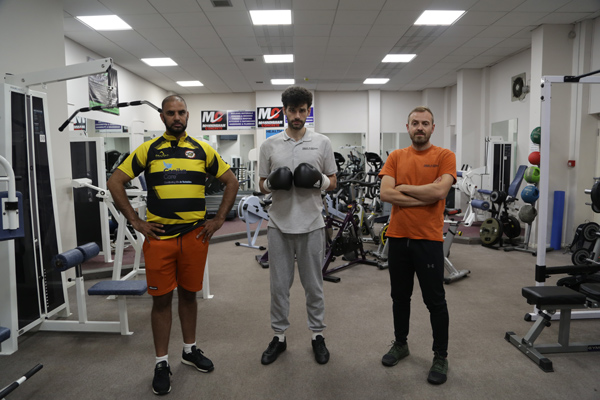 IMAS provides sports opportunities to disabled people and people facing barriers to participation in mainstream sports clubs, promoting social inclusion, equal membership, individual choices and a healthier lifestyle. IMAS is one of the thousands of organisations and projects across the UK that is supported by Europe.

Europe stands with Michael and IMAS

Simon was born, raised, and today lives in Lostock Hall, a village south of Preston. His younger years were spent raving from city to city. His later years saw him fall into alcoholism. 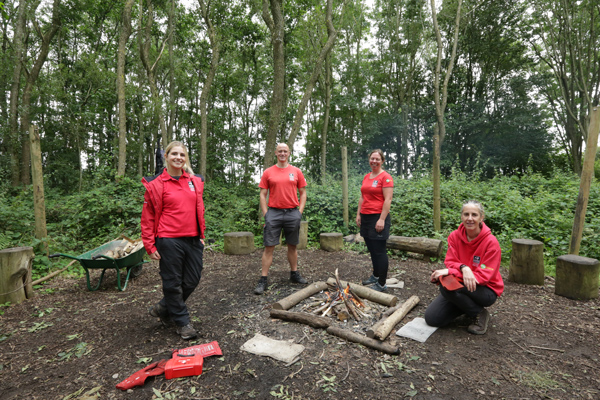 After the death of his mother, his life began to spiral. He was caught 'drink driving', being 3 times over the limit. With no one to post bail, he spent several nights inside a cell.

Whilst reaching out for help, he came across MyPlace, a project supported by Europe, where he was able to find space to improve his health and wellbeing in the heart of Brockholes Nature Reserve. He's now feeling ready to start work and get his life back on track.

MyPlace is a project run by The Wildlife Trust in Lancashire, for young people and adults to connect with local environments in order to learn new skills, build resilience and improve their physical health and mental wellbeing. MyPlace is one of the thousands of organisations and projects across the UK that is supported by Europe. 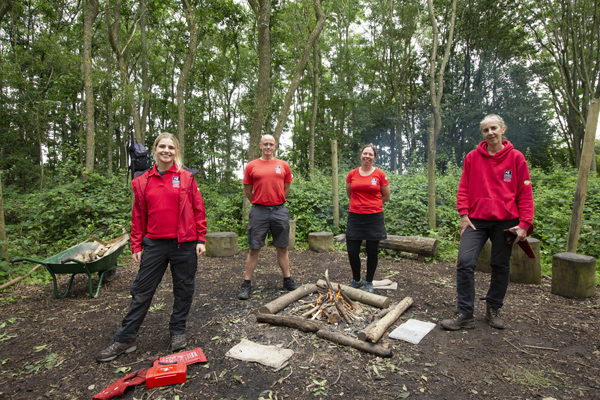 Europe stands with Simon and The Lancashire Wildlife Trust. 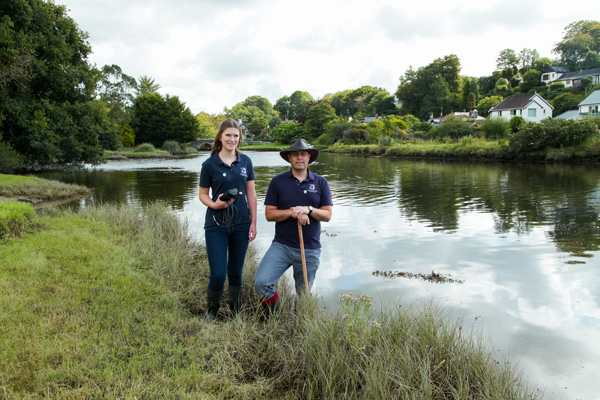 Simon grew up in Bude on the north coast of Cornwall, a surfing hotspot, but a place without much work. Although he moved out of the county for university and work, he eventually found his way back home.

Now Simon works on projects to keep our rivers safe; run by The Westcountry Rivers Trust, supported by Europe. 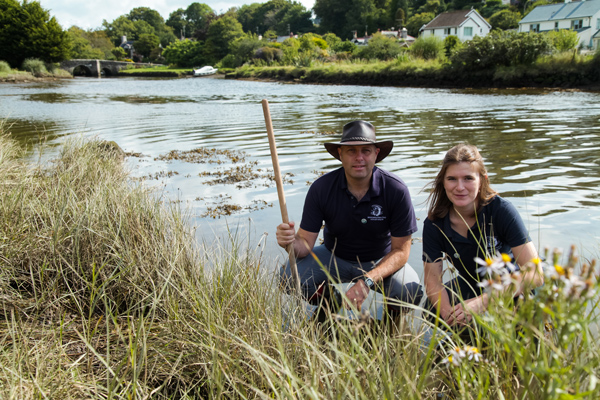 Europe stands with Simon and The Westcountry Rivers Trust.

Carla loves living in Blackpool, although she’s not quite a native yet. When she's walking along the beach, she feels like she's on holiday. 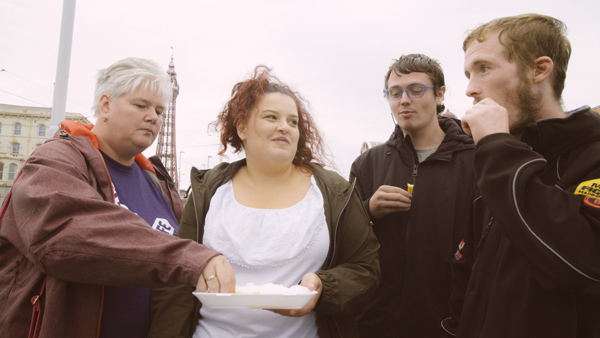 But last Christmas, her four children were taken away from her and she was left in a hostel. It was there she was recommended to Jane and Fran at Streetlife, volunteers from a local shelter, where food parcels are free and company is plentiful. The volunteers that run the night shelter were only able to be trained thanks to European support.

Alongside a group of other young people in a variety of different housing situations, she is almost able to stand on her own two feet and get her life back on track.

Streetlife is an organisation which assists vulnerable young people in Blackpool, a lot of whom access their service as homeless. Their aim is to enable and empower them to make informed choices, about issues affecting their lives. They provide support – for those up to the age of 26 – from The Base, Day Centre, and Night Shelter, which serves as emergency accommodation for those who need it most. Streetlife is one of the thousands of organisations and projects across Britain that is supported by Europe. 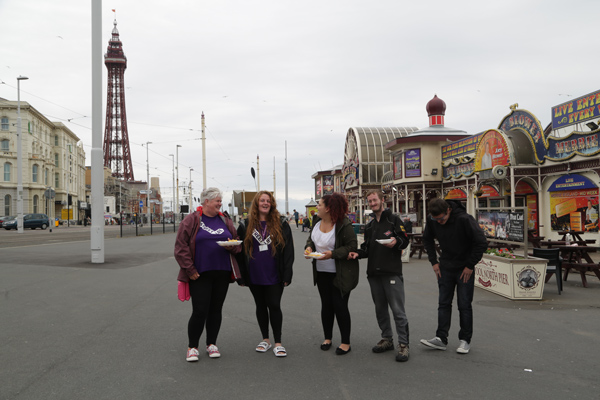 Europe stands with Carla and Streetlife.