NEW ANALYSIS: Labour would win up to 351 seats by working with Greens and Lib Dems

Labour would win up to 351 seats by working with other internationalist parties at the next election, new analysis reveals.

Now fresh analysis of the focaldata poll by Best for Britain shows Labour could win up to 351 seats if the party works with the Liberal Democrats and Greens at the next election. 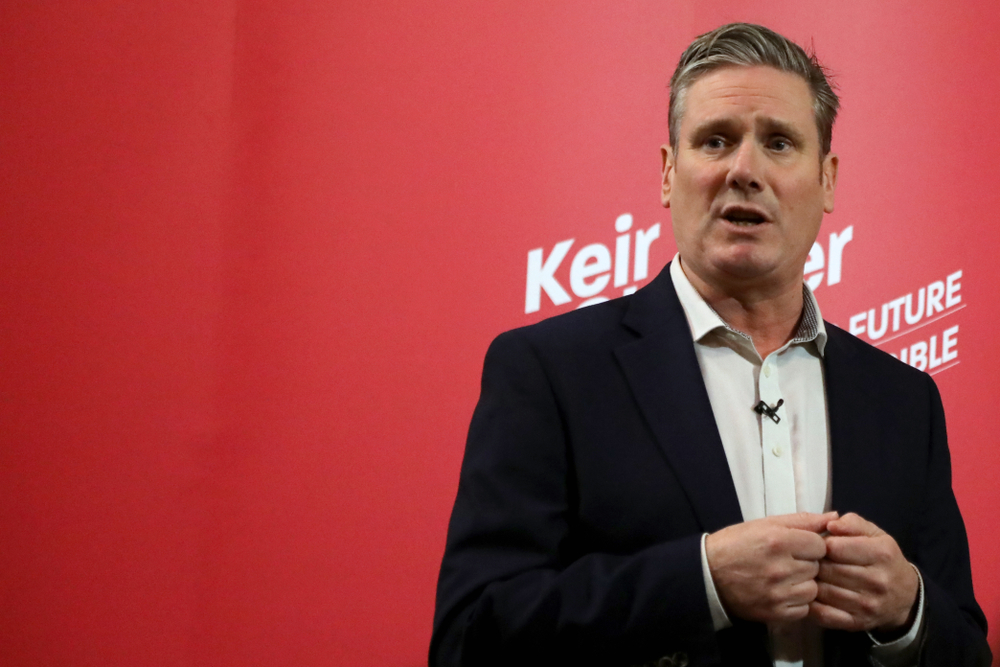 In a scenario where Nigel Farage’s party stands down for the Conservatives, as happened during the 2019 General Election, Labour’s seat total could fall to just 251 seats.

But if Labour join forces with the Greens and Lib Dems, the party would be on course for 351 seats at the next election – handing Labour a majority in Parliament, regardless of any pact between Farage and the Conservatives.

Best for Britain CEO Naomi Smith said the analysis shows Labour “need the support of other parties to make a return to government in 2024.”

As the UK Parliament currently stands, the Conservatives have a commanding majority over opposition parties of over 80 seats. This was the first clear majority for the governing party since David Cameron's win in 2015 with a majority of just 12 MPs. 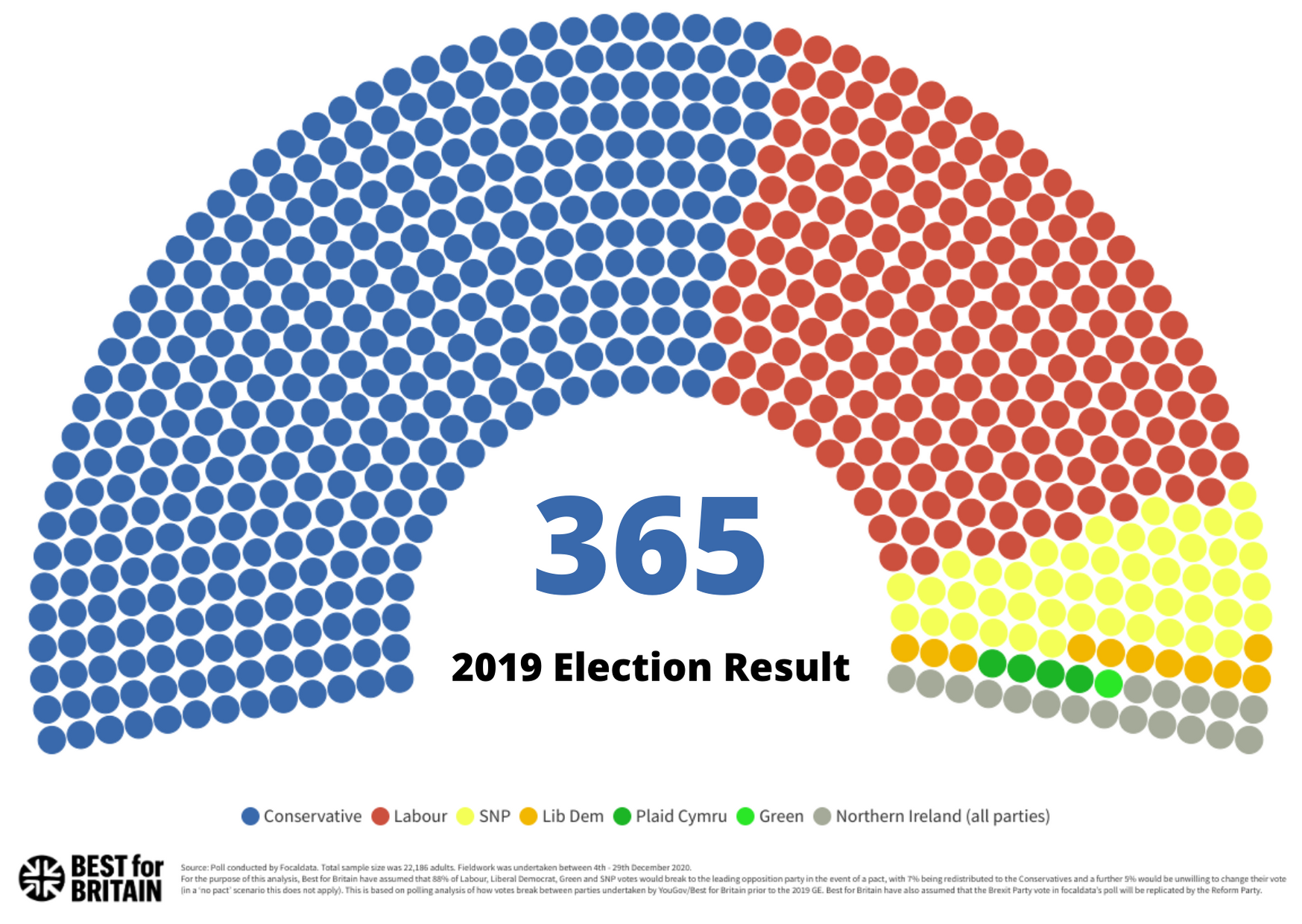 What would happen if people voted in an election now? Scenarios A, B and C...

Scenario A: No pacts

If no parties work together at all, it's currently a dead-heat between Labour and the Conservatives. 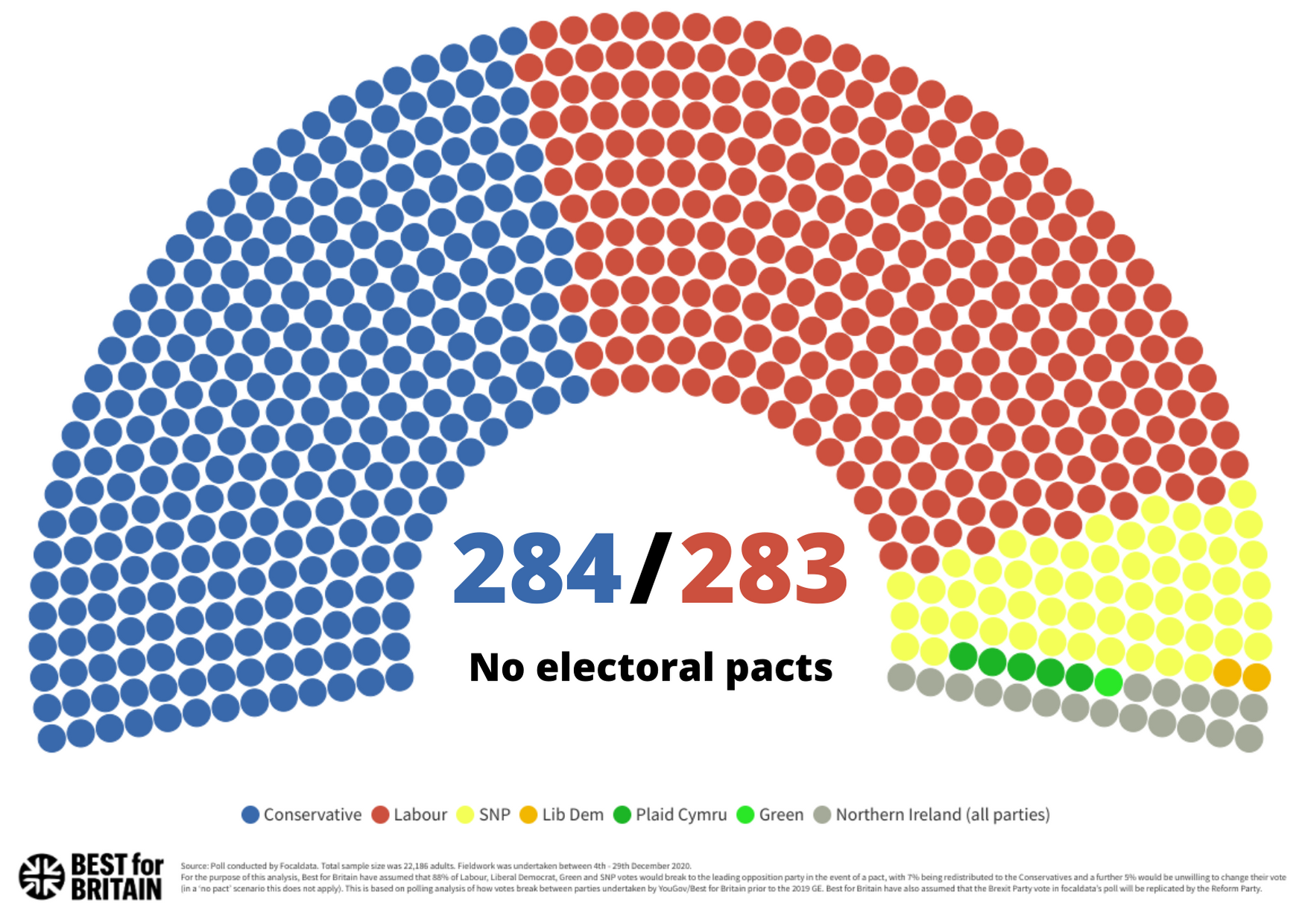 Scenario B: Reform/Brexit Party stands down for Conservatives

If only the Reform Party (formerly the Brexit Party) enters any pacts and stands aside its candidates where Conservatives could win it gives the Conservatives a clear majority. Failing to work with other internationalist parties would keep Labour out of power.

Labour pick up 26 seats across the North and Midlands lost in 2019, with the Conservatives retaining 17

Cabinet Ministers Alok Sharma and Alister Jack would lose their seats, while Robert Buckland would retain his seat by a margin of less than 1% 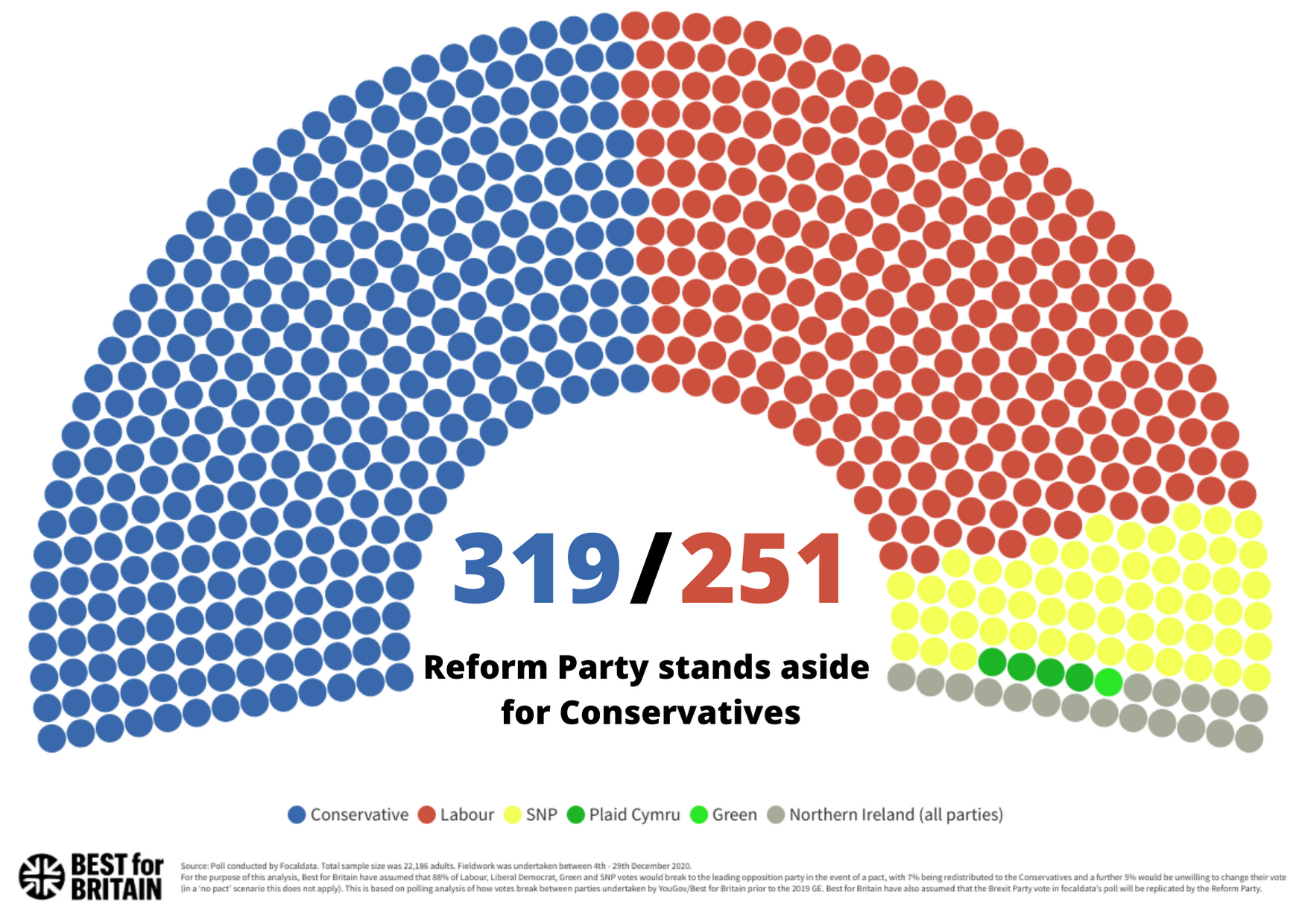 Scenario C: Reform/Brexit Party stands down for Conservatives and internationalist parties work together (including Labour)

If the Reform Party stands aside in seats Conservatives can win, and parties with internationalist outlooks (Labour, Lib Dems, Greens) do the same the analysis shows a clear win for Labour. If internationalists want to change the direction of the UK they need to work together.

Labour pick up 39 seats across the North and Midlands lost in 2019, almost entirely rebuilding the ‘Red Wall’ 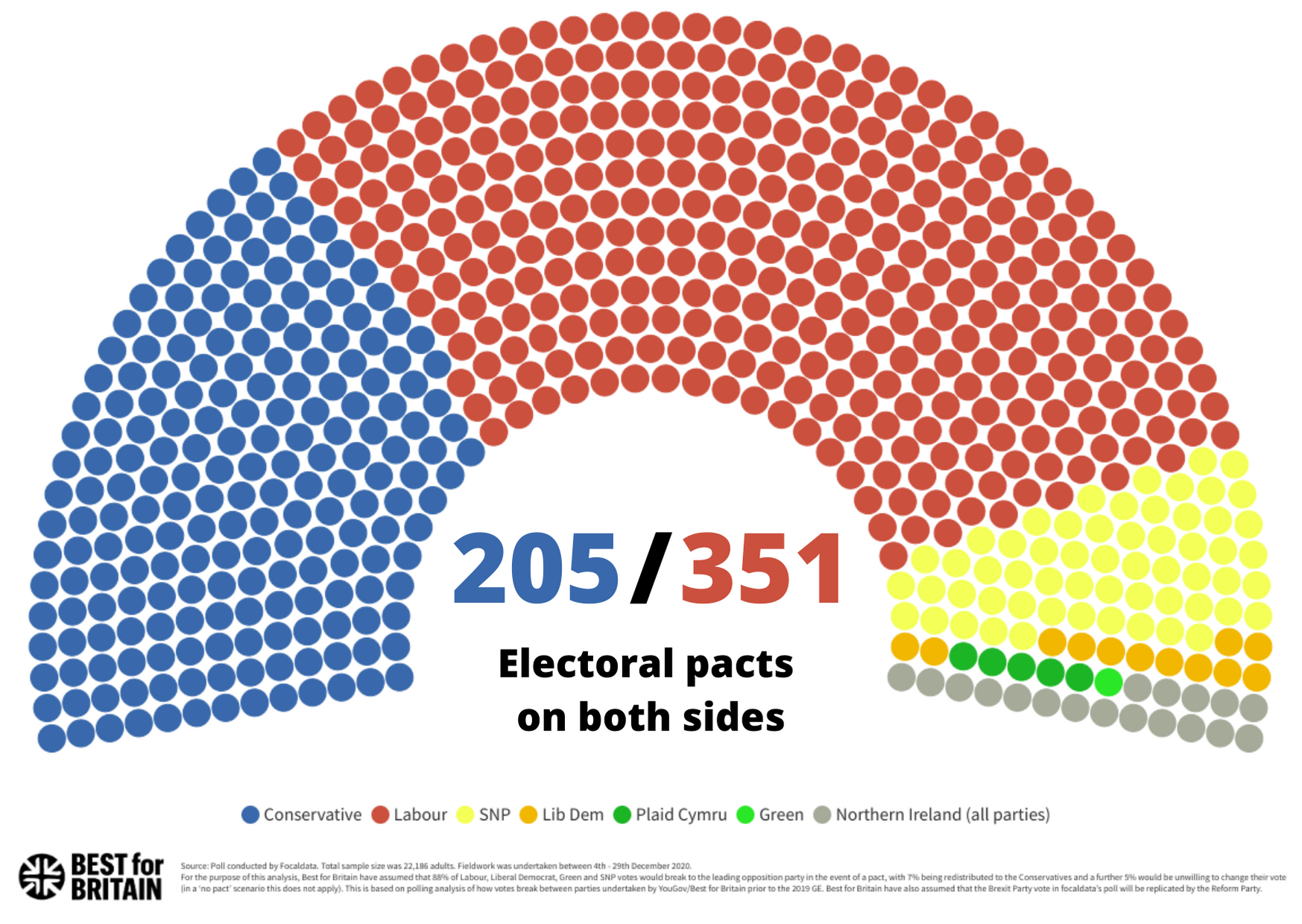 “Labour has done well to rebuild since last year’s election collapse, but as things stand they will need the support of other parties to make a return to government in 2024.

“This reliance is even clearer when you add Nigel Farage’s Reform UK party into the picture, previous iterations of which have stood aside for Conservative candidates over the last two elections in a show of nativist unity.

“If Keir Starmer wants a shot at No 10 in three years, the party must be open to working with the Greens and Lib Dems, particularly given the impending constituency boundary changes and SNP strength north of the border.”

What about the 'Red Wall'?

The electoral map changed significantly after the 2019 general election and there has been much discussion about why the historically Labour-voting 'Red Wall' constituencies of the North and Midlands switched to the Conservatives.

Our analysis shows that those seats do want to be represented by a party with an internationalist outlook and would vote for Labour again if they work together with the other internationals parties.

Without electoral pacts, Labour looks set to gain some seats but not enough to win the election outright and much of the 'Red Wall' stays blue.

Best for Britain's analysis of scenarios for electoral pacts shows that the Conservatives can win a significant Parliamentary majority if Nigel Farage's Reform/Brexit Party step aside for Conservative candidates in seats they could win.

But if Labour, Lib Dems, Greens and the other parties with internationalist values meet an isolationist electoral pact with a pact of their own they can rebuild the 'Red Wall' and gain seats across the electoral map.

Methodology behind Best for Britain analysis

You can download Best for Britain’s analysis, data tables and seat-by-seat outcomes here.

For the purpose of this analysis, Best for Britain have assumed that 88% of Labour, Liberal Democrat, Green and SNP votes would break to the leading opposition party in the event of a pact, with 7% being redistributed to the Conservatives and a further 5% would be unwilling to change their vote (in a ‘no pact’ scenario this does not apply). This is based on polling analysis of how votes break between parties undertaken by YouGov/Best for Britain prior to the 2019 GE. Best for Britain have also assumed that the Brexit Party vote in focaldata’s poll will be replicated by the Reform Party.