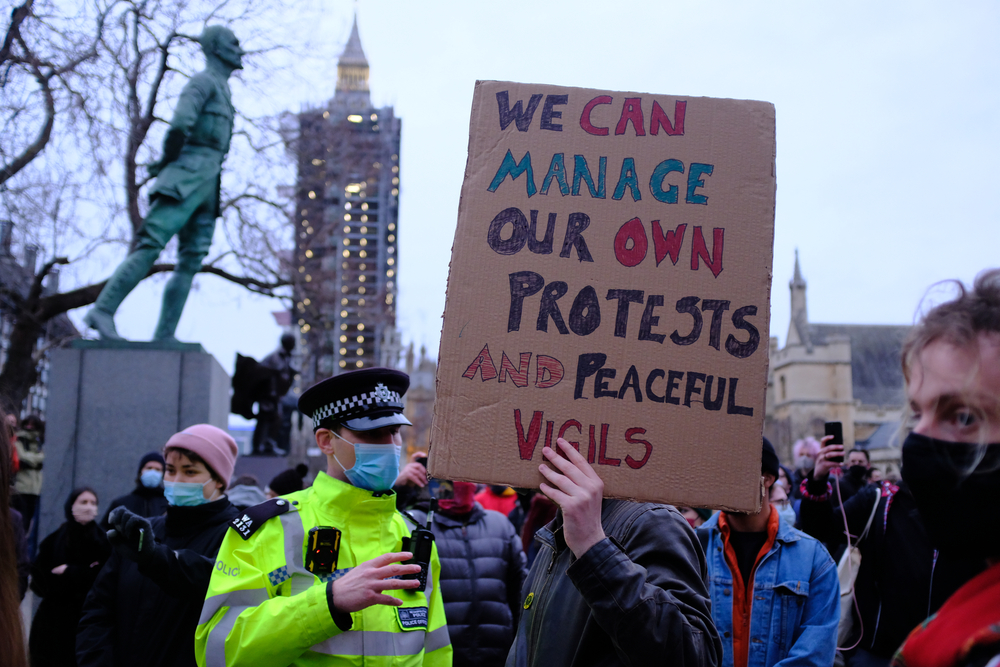 In an unprecedented move, former Remain and Leave organisations have signed an open letter calling for the government to withdraw its proposed Police, Crime, Sentencing and Courts Bill “in its entirety”.

After four years of disagreement over Brexit and a second referendum, campaigners have buried the hatchet to unite against the government’s plans to limit political protests. All signatories of the letter were able to conduct large scale demonstrations in London and across the UK peacefully and safely under existing legislation. However, under the new proposals, which change the boundaries defining the ‘controlled area’ of Parliament Square, neither side would have been able to hold the high-profile demonstrations and events in Parliament Square that shaped the Brexit debate.

Campaigners say that despite their “different political views”, they “stand shoulder to shoulder to defend our right to express these views”.

Dr. Meenal Viz, who also signed the letter, led a one-person protest during the first lockdown of the UK COVID-19 pandemic which successfully forced the government to drop guidance which asked NHS staff to re-used Personal Protective Equipment. This type of one person protest could also be banned under the government’s new proposals.

Signatories of the letter agree that “the role of government and the police should be to facilitate the organisation of demonstrations such that people are able to participate safely and legally” while claiming the government’s proposals amount to “actions of authoritarians.”

“This Bill aims to sanitise our democracy and block the visible engagement of the public with politics.

“The government should be encouraging that engagement and making it safe for anyone to have their voice heard.

“Instead, their instinct is to shut down debate and criticism. That goes for both inside and outside Parliament, where no proper scrutiny of this Bill will take place.

“At some point, we have to say enough is enough. Our groups are now coming together because Britain’s global reputation is on the line. We can’t credibly criticise other regimes for shutting down pro-democracy demonstrations while removing those very same rights at home.”

“The government is using this bill to rush through curbs on its own citizens’ right to engage in the democratic process.

“Peaceful protest is an essential part of political debate in any democracy, yet this legislation could make it impossible for millions of people to protest safely and legally right where it matters the most.

“So long as our laws are made in Parliament, then people should continue to be able to protest them on Parliament Square. Just like we were able to do in recent years.

“We are deeply concerned that the most authoritarian government in living memory is rushing through new laws which will restrict and prevent legitimate peaceful protest in Westminster. There is no proper scrutiny of this bill, nor appeal mechanisms. Rushed laws are usually bad laws.

"The fact that our groups, from opposite sides of debates come together is a clear sign of our concern for democracy in the UK.

What does the letter say?

Tell your MP you support the right to peaceful protest