The overwhelming majority of voters want to see the UK working with its allies in Europe and the world to solve pressing challenges such as climate change, pandemics and security, research from Best for Britain has revealed.

77% of voters said the Covid-19 pandemic has shown countries must work together, 79% said the UK should cooperate internationally to tackle climate change and 76% support working with other countries to deal with threats from Russia and China.

The large-scale poll of over 3,000 adults was conducted by Number Cruncher Politics and is being published today (Monday 26 April) at an event to mark the relaunch of Best for Britain, as it switches from being a temporary campaign against Brexit to a permanent organisation pushing for a closer relationship with Europe and the world. This includes through the cross-party Trade and Business Commission, set up earlier this month to provide independent scrutiny of the UK’s trade policy. Speakers at the event include Sir David Lidington, Labour MP Emily Thornberry, Green MP Caroline Lucas and former UK Ambassador to the United States Peter Westmacott.

The survey shows support for international cooperation cuts across the UK’s political divide, with a majority of the public backing it whether they voted Leave or Remain, or backed the Conservatives or Labour in 2019.  65% of voters said that now the UK has left the EU we should cooperate in areas of mutual benefit such as trade, foreign policy and climate change, including 60% of Leave voters. Overall 68% said the world’s greatest challenges must be met through cooperation with international partners, rising to 74% among Conservative voters. 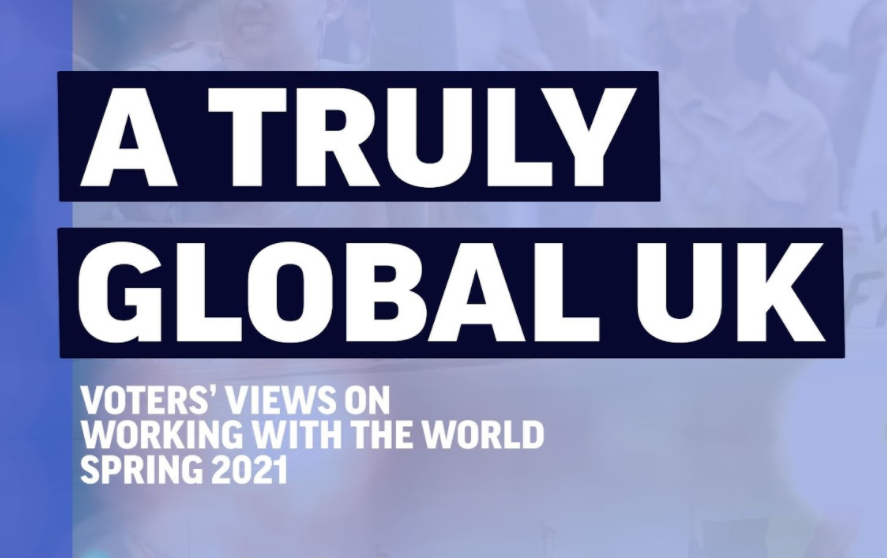 Public support for working with the world

The poll reveals the public is broadly unified in support of working with other countries regardless of their age group, gender or ethnicity. 72% of 25-34 year olds said the UK should cooperate with others to end world hunger, compared to 75% of over 65 year olds. Furthermore, 79% of Remain voters backed working with allies to regulate social media companies, broadly in line with the 72% of Leave voters who support this. And 71% of white voters said it’s important to learn foreign languages and about other cultures, again almost identical to 72% of ethnic minority voters.

However, despite strong backing for international engagement, fewer than one in five (18%) of voters said they understood what is meant by the government’s slogan “Global Britain.” 32% said they had never heard the term, while another 37% said they had heard it but are not sure what it means.

The cross-party Best for Britain group said this shows the government must move beyond “empty rhetoric” and step up cooperation with its allies to address global challenges. In a report published today alongside the polling, the campaigning organisation sets out a series of policy recommendations to build “A truly Global UK” that engages with its allies in Europe and the world. These include restoring the international aid budget to 0.7% of Gross National Income, adopting ambitious policies in the fight against climate change such as a carbon border tax, and being more consistent in respecting and standing up for the international rules-based system. 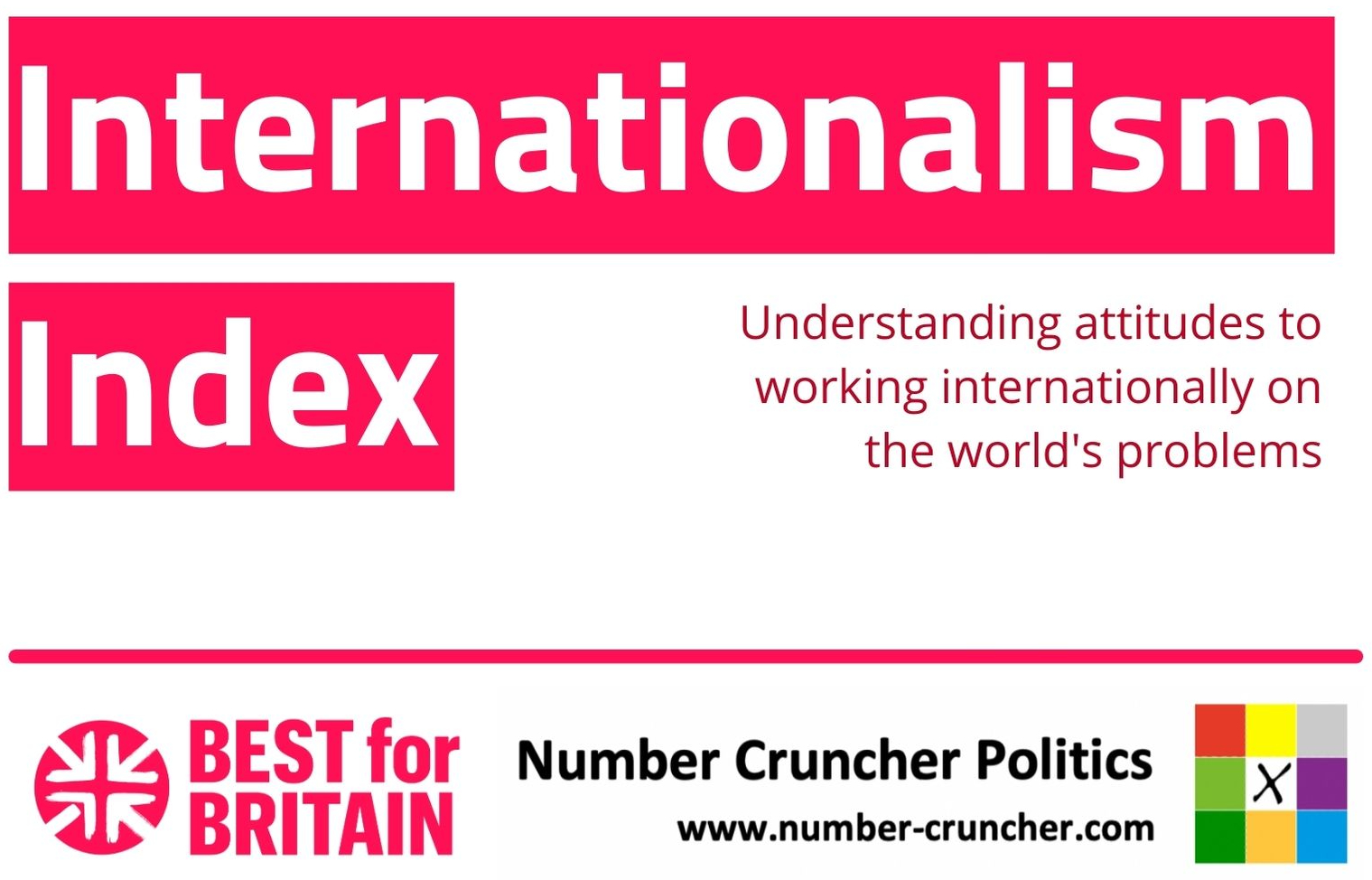 Best for Britain will also use today’s event to launch its Internationalism Index, a brand new tool developed with Number Cruncher Politics to look into how the most and least internationalist demographics in the UK view particular policies. The Internationalism Index splits the UK population into three equal groupings - Low, Medium and High - depending on how internationalist their attitudes are. The Index shows that the median British voter supports cooperation with other countries on a wide range of issues. Within the ‘Medium Internationalism’ group, 76% believe that overall Britain is better solving the world’s greatest challenges through cooperation, whilst only 15% disagree. 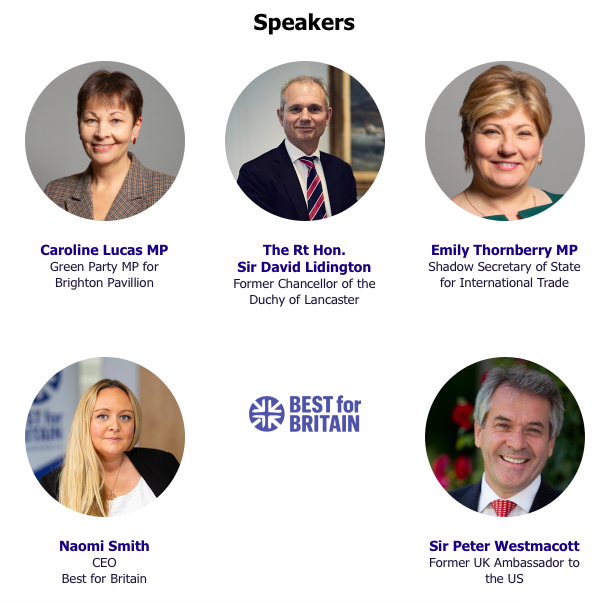 “Best for Britain is renowned for capturing voter sentiment about Europe and the UK’s place in the world. As part of our relaunch, we’ve developed a first of its kind ‘Internationalism Index’ proving that support for global cooperation cuts across the UK’s political divide, including among those who voted Leave or for the Conservatives in 2019.

“This should serve as a wake-up call to the government that it must move beyond empty rhetoric about a global Britain. It’s also a reminder to opposition parties not to neglect the majority of voters who want Britain to be world leading, not world beating. Cooperation rather than competition is the message coming through.

“Best for Britain will stand up to the government’s nativist and insular approach to champion a closer relationship with our allies in Europe and globally.”

“For decades, outward-looking, progressive, internationalist organisations in our country often defined themselves - and were defined by others - by their position on the Europe debate.

“But now that debate is settled, we need those same organisations to rediscover their purpose and energy to campaign once again for a Britain which is a force for good in the world, ready to work with our global partners to tackle the challenges we all face.

“I am delighted that Best for Britain is leading the way in that transformation, and showing that the British people strongly support that internationalist approach.”

"The prosperity and security of our own country depends increasingly on working with others.

“Whether it's addressing the climate emergency, defeating organised crime and terrorism or defending democracy, human rights and the rule of law, the UK's national interest requires effective international action.

“This should be based on strong alliances and partnerships with countries both in our own continent and the wider world."

"The choices we are making now will shape the future like never before – and global cooperation is critical if that future is to be safer, fairer and greener.

“From the climate emergency to the refugee crisis, from keeping fossil fuels in the ground to transforming democracy for the 21st century, Britain has an opportunity to redefine global leadership and ensure that, post-Brexit, we are engaged in building bridges and alliances rather than isolationism."

“Joe Biden’s election gives the free world an opportunity to strengthen the rules-based international order and restore faith in the principles on which it is based.

“The UK can and should be part of that process. But we can only expect others to play by the rules if we do so ourselves, in our governance, our respect for international law and in the safeguarding of civil liberties."

Number Cruncher Politics polled 3,004 UK adults between 8th and 18th March 2021. Responses are weighted to the profile of the population.

Find out more about the Internationalism Index here.