Three (red) lines in the sh*t

Theresa May has focused her entire Brexit strategy on three red lines:

1. Establishing full free trade deals with countries such as the US, Australia and New Zealand

2. Ending the free movement of people from the EU

3. Ending the jurisdiction of the European Court of Justice

The PM's latest fudged deal chucks each of these red lines in the bin - no one is happy with the Chequers deal, it's the worst of all possible worlds. 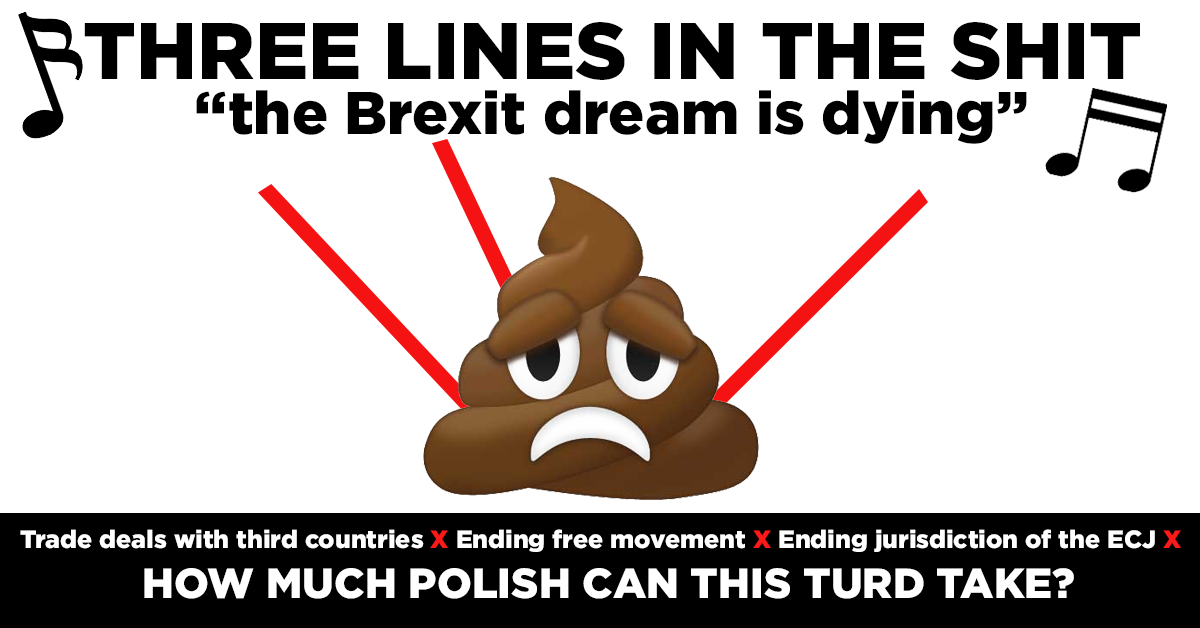 1. Establishing new trade deals
The Chequers agreement concedes that the UK will now take all its regulations, without any control, from the EU. This makes agriculture-based deals (such as with the US and Australia) impossible. Liam Fox might as well resign. Her deal is expected to be the start of concessions and many people still think she'll end up accepting the EU's customs union to avoid a hard border in Northern Ireland- and that definitely kills off any independent trade deals... although it is good for peace.
2. Ending free movement of people
Theresa May has asked for a single market in goods as the only way of preserving jobs and the economy and as a route to reducing the border in Northern Ireland. She is wrong - we need a single market in services to keep our service-based economy and jobs going. She's also wrong when she says her deal is anything like a solution. Everyone agrees that her deal is the start of concessions with the EU, not the end. The EU has been clear that you can't have a single market on goods (and services) without having the free movement of people. Theresa May looks set to chuck another red line in the bin by accepting this before October.
3. Ending jurisdiction of the ECJ
The Chequers deal concedes that we will now be vastly more integrated in the EU than the government previously promised. Every piece of EU integration will be supervised and governed by the European Court of Justice. We're not leaving its jurisdiction. The only thing leaving is the court's UK judge when we stop being members of the EU.
As many people sing 'football's coming home' this evening, there is a new verse on many people's lips:

Three lines in the shit, the Brexit dream is dying...
Nobody can support this Brexit - not even Boris Johnson or Nigel Farage!
If you're fed up of the politicians' fudged efforts, demand that the people take back control - demand a People's Vote on the final Brexit deal by writing to your MP today!