Artic blast: Why Dover chaos could be like losing Britain’s biggest truck fleets 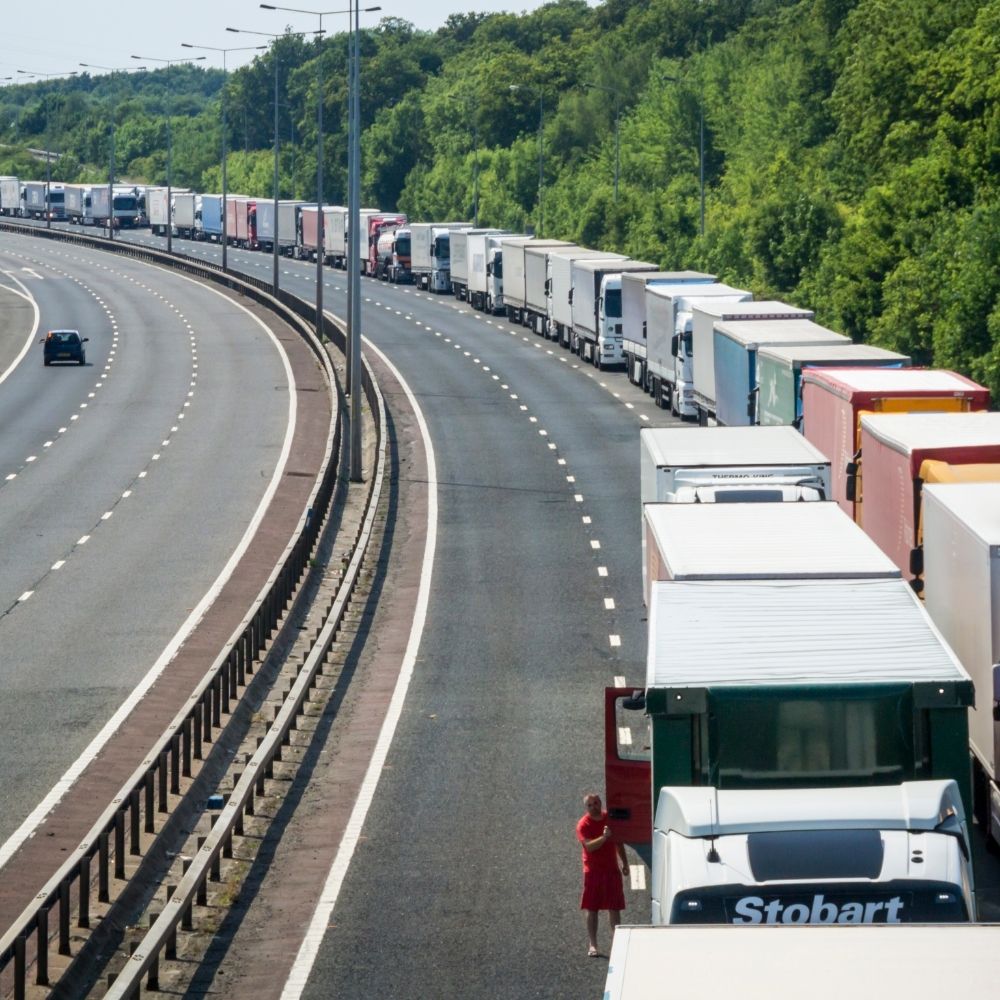 What would happen if Britain’s largest fleet of trucks was taken out of service overnight?

Thanks to the dispiriting exercise in delusion that is our Government’s ‘preparation’ for UK-EU trade come January 1st, we may soon know.

According to Michael Gove – the man, remember, who is responsible for No Deal planning – a ‘reasonable worst-case scenario’ could see 7,000 trucks stuck in a two-day queue on the roads leading to Dover.

Let’s put that figure into perspective…

It’s a DHL of a mess

According to the experts at Motor Transport, in 2018 the biggest fleet of lorries in Britain belonged to DHL. They had 7,115 trucks on the road, near as damn exactly the number Mr Gove says could be stuck somewhere in Kent if things go pear-shaped at Dover come January.

Royal Mail was the second-biggest fleet, with 3,700 trucks. So if you can’t get your head around the impact of losing DHL’s lorries for a couple of days, try to imagine the impact of Royal Mail having a two-day truck crisis, then double it.

Obviously, Royal Mail trucks tend not to be on cross-Channel duty, and the same is true of lots of DHL lorries too, but that’s not the point: this is simply about grasping just how big a problem the Dover issues are.

Now, imagine you are a haulier…

In 2018, the top 100 UK hauliers had an average profit margin of 2 per cent – that’s the big boys, benefiting from economies of scale and the flexibility that running a large operation can bring. Margins are even tighter further down the food chain.

By way of comparison, the net profit margin for commercial banks in 2018 was 23.8 per cent – that’s why they get to pose in Porsches, while truckers doze in Ivecos.

Having trucks out of use for even a few hours, never mind a couple of days as Gove suggested, will destroy profit margins for hauliers.

All that time, drivers have to be paid (and owner-operators will still have had to fork out perhaps £8,000 for a three-month truck lease, even though they’re parked up in a Kent compound), while insurance, taxes and other expenses aren’t likely to be reduced to take account of the down-time.

The short-term risk is that British hauliers will go out of business, while European hauliers stay away from the UK.

In the longer term, the additional delays will be priced into logistics contracts – so we'll still have delays, until such times as a comprehensive Free Trade Agreement is sorted with Europe, and the cost of those delays will be passed on to consumers.

That’s right, you’ll be the one paying for all those trucks to be parked up somewhere between Dartford and Dover.

Gove says a two-day queue of 7,000 trucks is a ‘reasonable worst-case scenario’.

The use of a qualifier such as ‘reasonable’ tends to suggest that this estimate is not, in fact, a worst-case scenario.

Remember the kerfuffle around ‘Operation Yellowhammer’, described as a set of ‘reasonable worst case assumptions’ about a No Deal Brexit that warned of public disorder, food shortages and medicine worries. It was pretty scary stuff but, then, it turned out there was a Black Swan option too, which was … ‘worst-case scenario’ planning.

It is ‘reasonable’ to assume that hauliers will adapt to new challenges, given time, that the border systems they are expected to have mastered will either work correctly (once they have been completed) or be debugged, given time, and that we’ll get used to higher prices and lower availability of imported goods, given time.

It’s also ‘reasonable’ to ask why Gove is now writing to warn hauliers of problems (problems they have been flagging up for some time with increasing urgency), like a zoo keeper who’s left all the cages open, then blamed visitors for failing to outrun Mr and Mrs Tiger.

All our tomorrows and two-days

Another point that’s worth noting about that ‘two-day’ warning: at the beginning of last year, a Govt-commissioned report from UCL warned that trucks would face six-day queues at Dover if new customs checks delayed each vehicle by just 70 seconds.

Extra processing time of 80 seconds per truck would lead to ‘no recovery’ – described by an official as widespread permanent gridlock.

There was some encouraging news – UCL said extra customs checks of up to 40 seconds per vehicle would have no impact on the queueing time for outward journeys through Dover.

As anyone who has gone through an international airport will attest, it’s not the getting through customs that’s a problem, it’s the miserable snaking queue that precedes customs that holds everyone up.

Still, if the new border systems and customs staff – neither of which is ready – can crash through the new red tape procedures in less than 40seconds, without causing any backlog of traffic, no problem (apart from the additional costs, needless time-wasting and, of course, whatever delays occur when trucks get to France).

A border has two sides

Discussions in Britain have, in that most British of ways, focused very much on what happens at British ports.

But, when you think about it, there probably need to be new red tape tortures on the other side of the Channel too.

To its credit, France appears to be doing a better job of looking like it’s ready for that January deadline – signs are up, inspection posts have taken shape, there even seems to be a procedure specially for fish, though of course the rascally French may just be teasing us about the fish, as they always do.

Alas, these preparations are a sure sign that there will be delays for lorries coming into Britain – and, yes, that includes those poor trucking souls who spent 48hours parked up in Kent holding pens, waiting for the chance to get into France in the first place.

Gove will tear us apart

Just a few reminders about choice quotes from the men who are, nominally, in charge of things.

‘It is essential that traders act now and get ready for new formalities.’  (Gove’s letter to hauliers this week). Anyone care to list those formalities? The Road Haulage Association says: ‘How on earth can they prepare when there is still no clarity as to what they need to do?

‘There will be no border checks.’ (Boris Johnson, 2019). There will now be automated checks on trucks coming into Kent from the rest of the UK to see if they have a permit to enter the county, with a hefty fine for miscreants. That’s a functioning border within England, before trucks get anywhere near the cross-Channel checks.

‘People in this country have had enough of experts.’ (Gove, 2016). It seems the amateur approach isn’t foolproof either.

‘We pulled it off, we broke the deadlock, we ended the gridlock, we smashed the roadblock.’ (Johnson, December 2019). One word: Kent.