Brexit is the most important issue facing our country!

This year’s General Election was triggered by Brexit, people saw it as the ‘Brexit election’ and Brexit was the most important issue for people when casting their vote.

This year’s General Election was triggered by Brexit, people saw it as the ‘Brexit election’ and Brexit was the most important issue for people when casting their vote.

While many other issues consumed the election, including the NHS, the economy and the threat of terrorism, Brexit remained top of people’s minds. Since June many commentators have questioned the importance of Brexit during the election and in turn, its influence on the result.

New research, published this week, by the British Election Study (BES) reaffirms the importance of Brexit in this year’s election. The BES is a unique study, surveying the same 30,000 people over an extended period of time. Unsurprisingly, over a third of people polled said Brexit was ‘the most important issue facing our country’. Brexit was trailed by the NHS, in third place, and the economy, in fifth. This study corroborates and builds on analysis we have been doing ourselves, which highlight similar trends. We will share more on this soon. 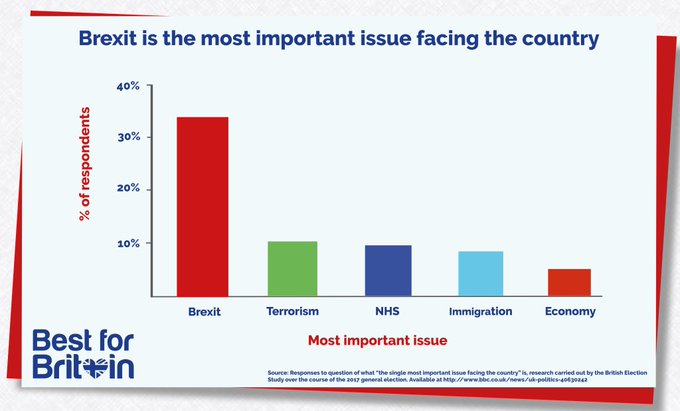 While the study presented Brexit, the NHS and the economy as separate issues, they are incredibly interconnected. Our already ailing NHS stands to lose big because of Brexit. The NHS is dependent on EU citizens. Presently 7% of nurses and 10% of doctors are EU nationals. With Brexit looming, we have already seen a significant decrease in EU nurses registering to work for the NHS – it is down by 83%. Turning to the economy, since the referendum, we have seen the pound lose its value, inflation increase, wages decrease and this week, the Bank of England said, our already stunted economic growth would continue. The ongoing uncertainty brewed by our government’s cavalier and callous Brexit path will only exacerbate these economic concerns and evolving realities.