Last month, we started our #BREXITREPORTS campaign in support of a group of over 120 cross-party MPs who had joined forces in calling for the release of the 58 long-awaited Brexit economic impact studies, promised by DExEU.

Last month, we started our #BREXITREPORTS campaign in support of a group of over 120 cross-party MPs who had joined forces in calling for the release of the 58 long-awaited Brexit economic impact studies, promised by DExEU.

A trending hashtag, thousands of tweets, and almost 10,000 messages to MPs was the direct result of your backing. Thank you.

But, what’s been the impact in terms of real world results?

Well the pressure paid off, with an additional 54 MPs (see the list here) adding their voices to the demands that Parliament get to know what these Brexit Reports contained. And that, at the very least, the Select Committee for Exiting the EU get full view of all the analysis produced.

This demand for Government transparency received a big boost when it gained Shadow Cabinet backing, with Labour’s Keir Starmer taking up the charge. A riveting Commons debate and binding resolution followed – requiring the Government to produce the reports, or risk being held in contempt of Parliament (read the transcript here).

The Department for Exiting the EU’s repeated failure to produce the documents (despite issuing public statements that listed the industry sectors they covered, as well as announcing that the Prime Minister had read Summary Briefs of them) led to yet more backing for the movement, this time with Conservative MPs also pushing for publication.

Even Jacob Rees-Mogg–thanks to his deep love of parliamentary procedure and history–became an unlikely ally.

David Davis, and his extensive team, were then given a seven-day deadline by Speaker of the House John Bercow, to handover the reports described by their creators as ‘being in excruciating detail’, or explain why they could not.

The response was baffling. Suddenly the sector reports weren’t reports at all, merely a collection of information that the department would need ‘more time’ to transform into an acceptable format for handover.

Rumours that these documents (originally due for completion in February 2017) didn’t actually exist, suddenly seemed to have some grounds in reality. DExEU asked Hilary Benn and his Select Committee for more time, and were charitably granted it. They were given a new deadline – 3 weeks, or suffer the consequences.

This brings us to Tuesday 28th November. 850 pages of analysis were finally handed-over to the Commons Select Committee for Exiting the EU, as well as The Lords Committee, and representatives of the devolved parliaments. Barely two ring-binders full. MPs were astounded. Keir Starmer tabled an urgent question in Parliament to find out where the rest of the information was, and why it hadn’t been included in the dossier.

The Speaker had, after all, been explicit in his instructions that all materials should be handed over to the Select Committee, and they should be the ones to make the decisions as to what ‘sensitive materials’, if any, should be withheld.

Again, David Davis was nowhere to be seen, leaving Department Minister, Robin Walker to once more be the de facto spokesperson for Government evasion. Their reply was that the Select Committee had failed to ‘give assurances’ about how the so-called ‘commercially sensitive’ material would be handled. The Speaker incredulously asked ‘what assurances had been sought, and when?’

Unable to provide an answer, DExEU Minister Walker was instructed that David Davis (his boss) needed to present himself before the committee and provide whatever materials they requested, as a matter of urgency.

Bercow’s exact words were, “When it is suggested that that meeting should be soon, it means soon; it does not mean weeks hence. It means very soon indeed. Nothing–no commitment, no other diarised engagement–is more important than respecting the House, and in this case, the Committee of the House that has ownership of this matter”.

The Government is now only a single mis-step from being held in contempt of Parliament, which (according to Wikipedia) would have the following result:

‘MPs accused of Contempt of Parliament may be suspended or expelled.[17] They may also be committed to the clock tower of the Palace of Westminster,[17] although this practice has not been used since Charles Bradlaugh was detained in 1880.’

I know a few people who might be in favour of bringing that last option back, chief among them the MPs whose open letter (and persistence) kicked all this off – Seema Malhotra and David Lammy.

We’ll let them have the final word (for now). We’re sure there’s still plenty more drama to come in the saga of the #BREXITREPORTS 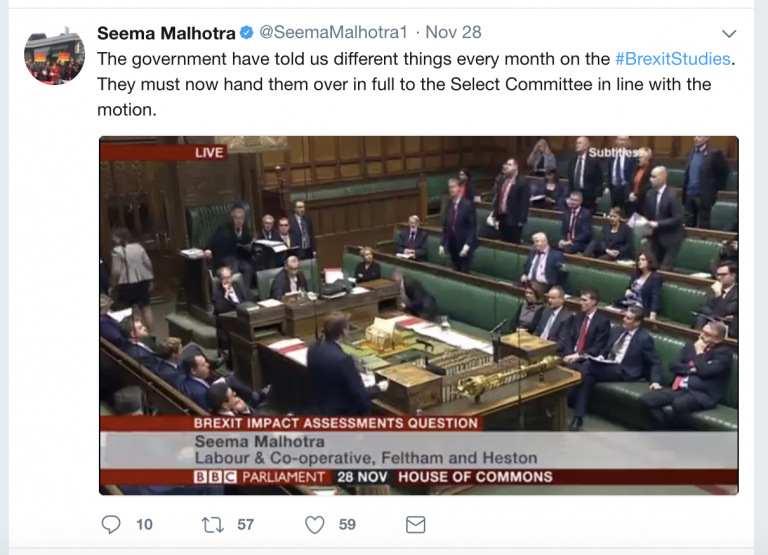