The below is a full transcript of our CEO Naomi Smith's speech from the rally protesting the Elections Bill in Parliament Square on 5th February 2022.

Can I just say, it feels really good to be campaigning with a big crowd once again! 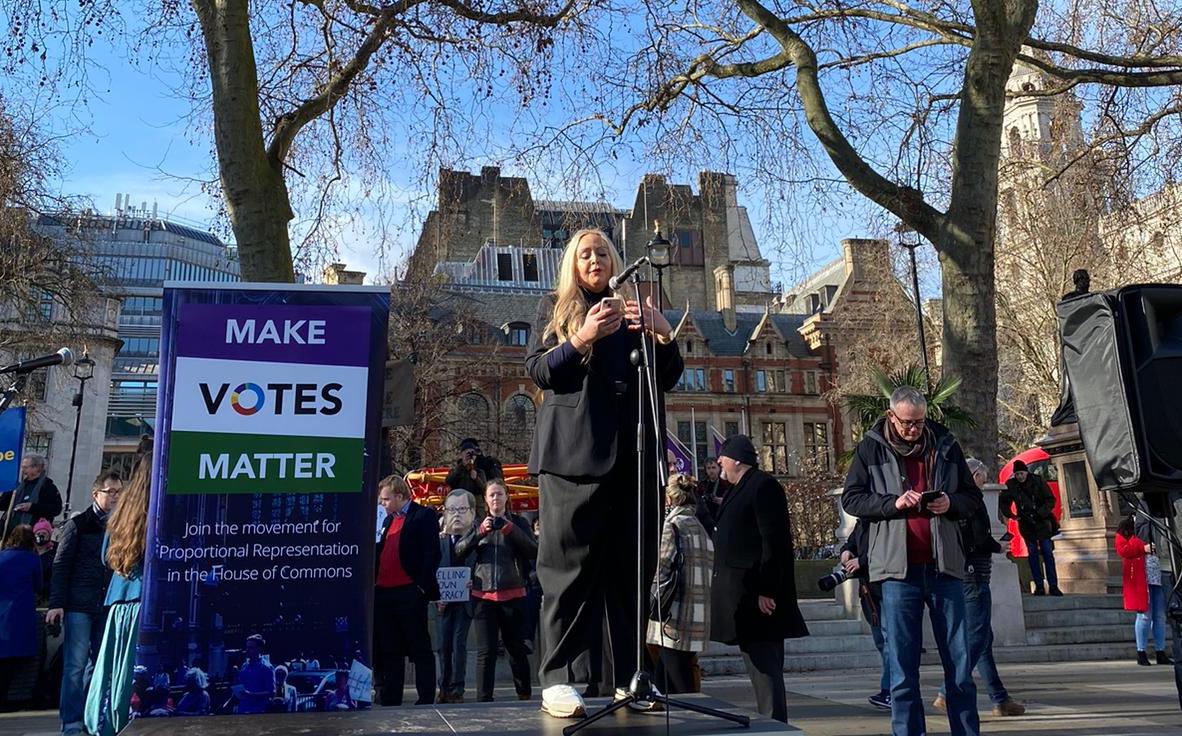 Thank you so much for coming out and making a stand for free and fair elections in the UK. Isn’t it terrible that I even need to say that sentence?

If it wasn’t clear already, then the last few months have hit it home. The system is broken, British democracy is broken.

The government is bouncing from one scandal to the next.

Ministers have said - if you don’t like it, you can vote us out. He said it because he knows that the game is rigged

In a general election, under first past the post, the odds are heavily in their favour.

With the Elections Bill, they are trying to tip the scales even more.

Despite the spin, this Bill facilitates, rather than prevents, foreign money impacting our elections.

There is nothing in it, on stopping the spread of misinformation.

And as you’ve heard, far from tackling low-turnout, it actively works to suppress voting.

The Elections Bill, combined with a raft of other legislation being brought forward by this government, is nothing short of the most authoritarian power grab we have seen in our lifetimes.

It’s not just Voter ID that should concern us.

Many of the Bill’s other clauses are frightening

But that will discourage smaller campaigns who may lack the knowledge or means to navigate the complex process and who will be too afraid to campaign lest they run afoul of the rules.

With all these things combined, it will have a chilling effect on our democracy. It will deprive voters of the independent expertise to make an informed decision. It will ensure that the only ones who take part in elections are party insiders and the well funded.

But if only that was all.

The Elections Bill is just one way this Government is cutting off avenues for holding them to account.

Even what we are doing right now, our fundamental right to protest in parliament square, is under threat. The only reason they can do all this is because we are one of 2 European nations still using First-Past-The-Post voting for national elections.

The other is Belarus.

It is a democratic outrage that with a minority of the vote Johnson secured an unassailable majority. Astonishingly, the Elections Bill will introduce this outmoded electoral system to other elections as well.

So while defeating this Bill and other parts of this government’s agenda is today’s battle, the war won't be over until we deliver a fairer voting system that makes all votes matter.

In attacking our elections, the government is attacking the most fundamental way of holding them to account.

And that’s why Best for Britain is here today, It’s why we are working with all opposition parties and decent Conservatives to ensure this government is defeated

We are working with all parties to mitigate the damage of these bills. Johnson is wounded, his party is divided. There is hope, we can beat them

Just last month, we threw a spanner in the works of the Policing Bill.

A Best for Britain amendment protecting protest in parliament square was backed by the Lords.

We can do the same here.

So please google Best for Britain, learn more about our work, and find out how you can get involved.