Two-thirds of Brits think the government has failed in negotiations with the EU, while 57% would blame the UK government if the Brexit transition period ended without a deal in place, according to a new opinion poll.

The poll was conducted by YouGov on behalf of Best for Britain, who are campaigning for a UK-EU trade deal.

It finds that Brits think that leaving the transition period without a deal in place would have wide ranging negative consequences, particularly for the UK's economy and international reputation.

Two-thirds of the public believe that the government has failed in negotiations with the EU, while 57% say talks ending without a deal in place would be the fault of Boris Johnson's government.

With talks moving to Brussels on Thursday and the new November deadline for an agreement fast approaching, Best for Britain CEO Naomi Smith said the poll's findings show voters "have had enough of the posturing" and "would not forgive Boris Johnson" for failing to deliver a deal.

With fears that the Brexit transition period could come to an end without a deal being in place being reignited last week, those surveyed were asked whether they thought ‘the UK government has generally succeeded or failed at getting what they want from the negotiations with the European Union?’ 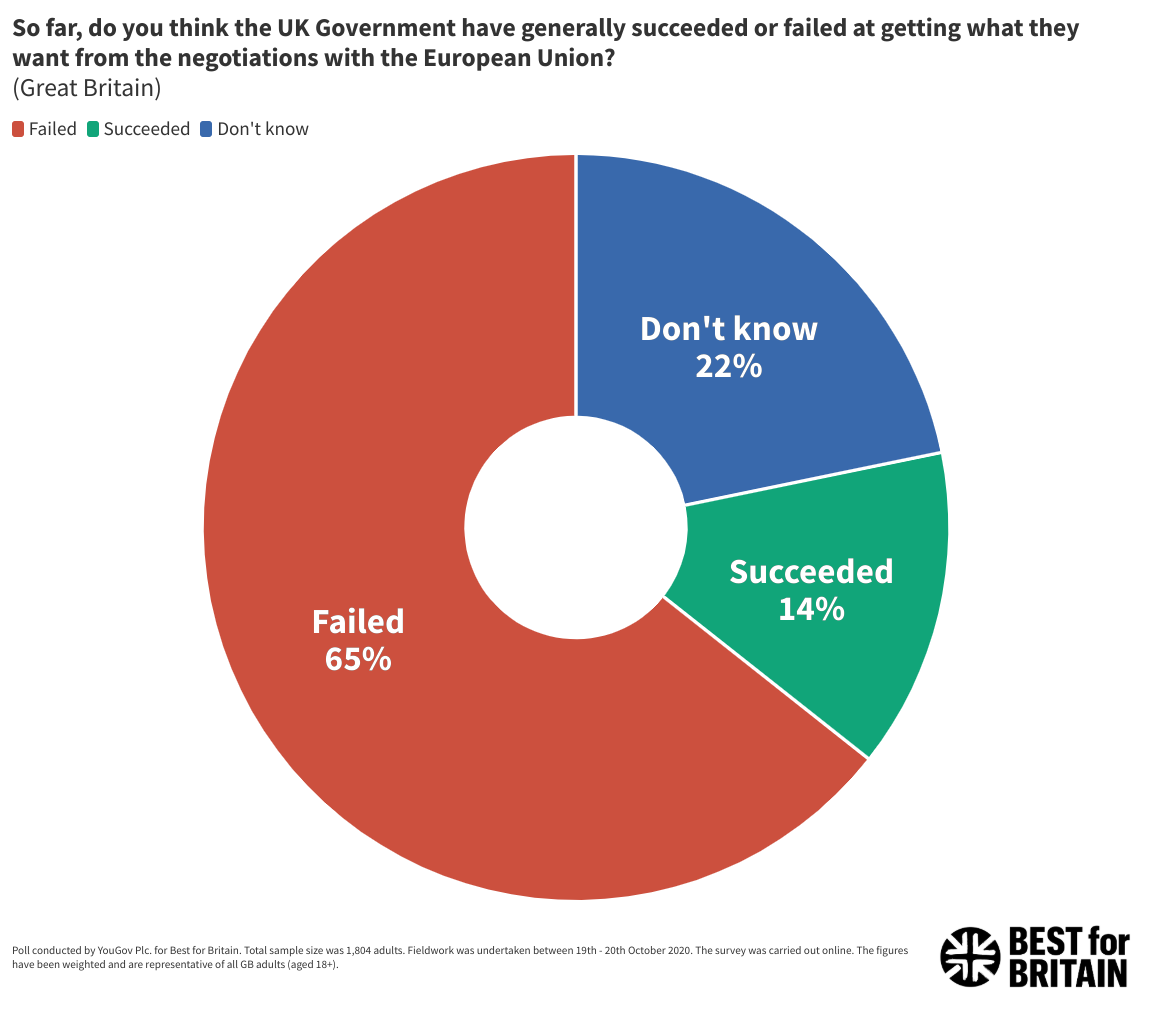 Two-thirds of Brits (65%) said they thought the UK government had ‘generally failed’, registering their dissatisfaction with an approach to negotiations that has yielded few breakthroughs but plenty of confrontation. Just one in seven respondents said negotiations had ‘generally succeeded’.

Almost half of Conservative (44%) and Leave (47%) voters said the government had failed in negotiations. This view was also carried by every age group and every UK region, rising to three-quarters of voters in London (74%) and Scotland (76%). 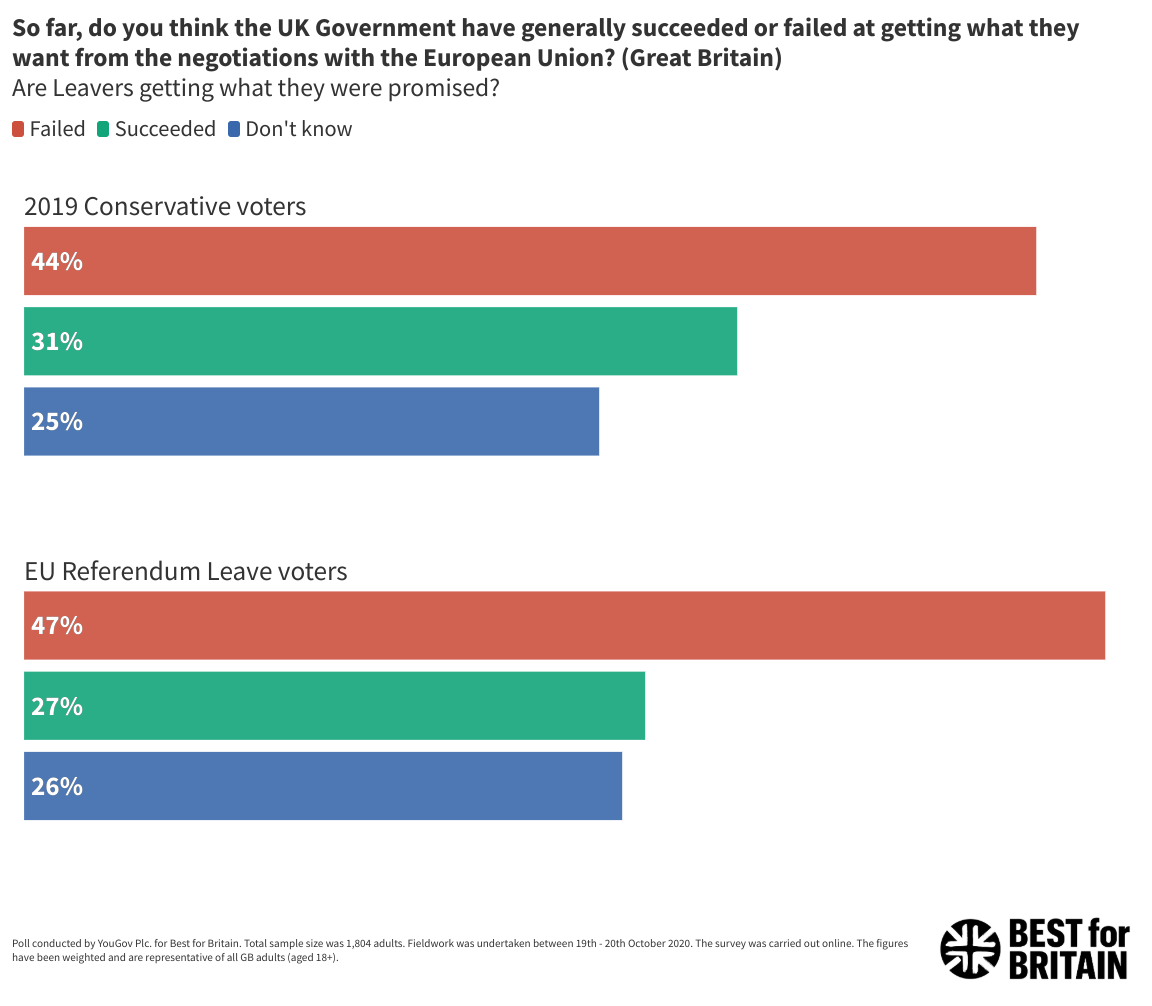 Who is to blame for no-deal?

Respondents were also asked who would be to blame for a failure to reach a trade deal with the EU. Of those who expressed an opinion, 57% said Britain leaving the transition period without a deal in place ‘would be the fault of the UK government’. 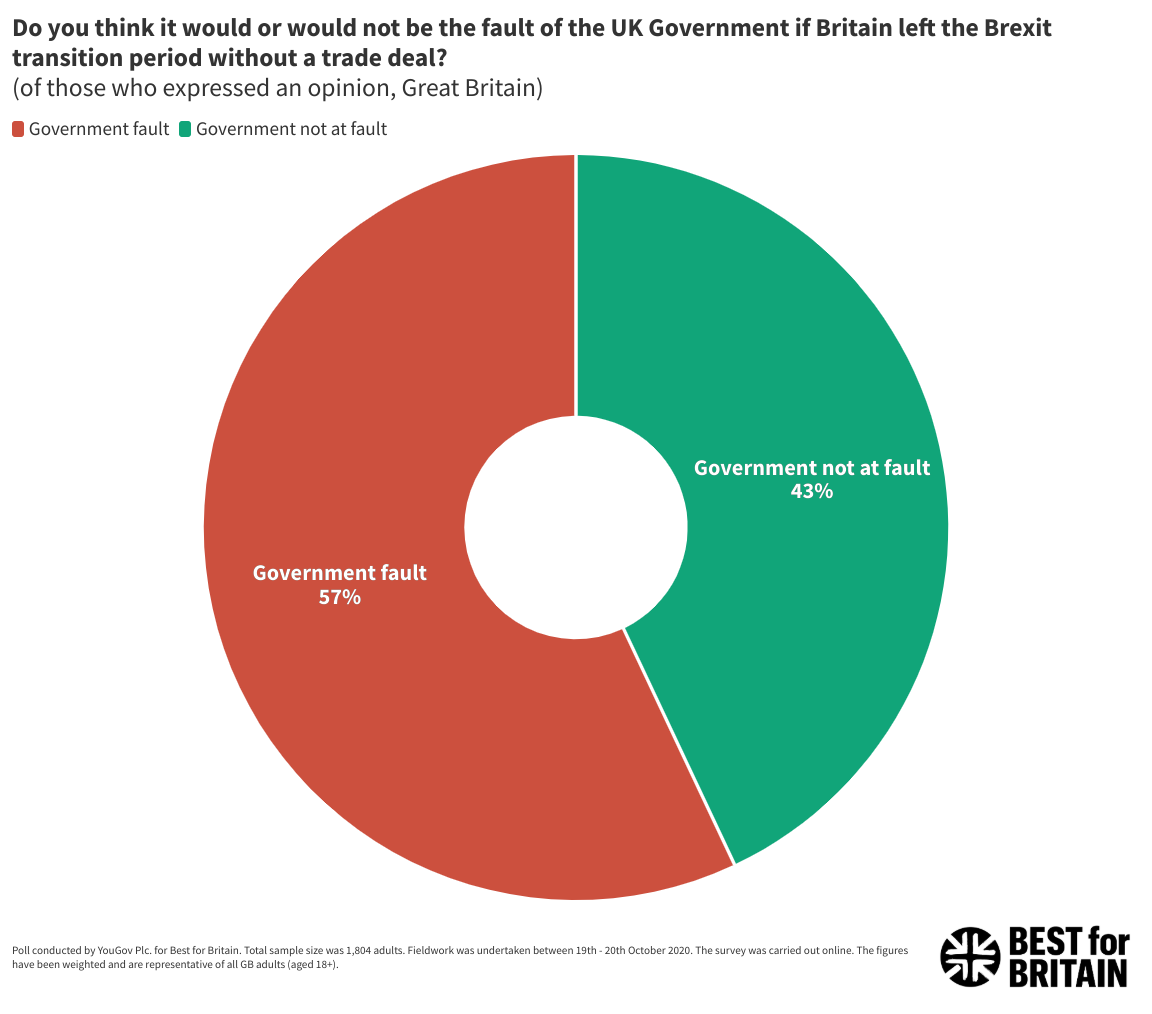 Young people (18-24 year olds) were the most likely age group to blame Boris Johnson’s government (83%), while London (70%) and Scotland (71%) were the regions with the highest proportion of respondents who would blame the UK government for a no-deal Brexit. 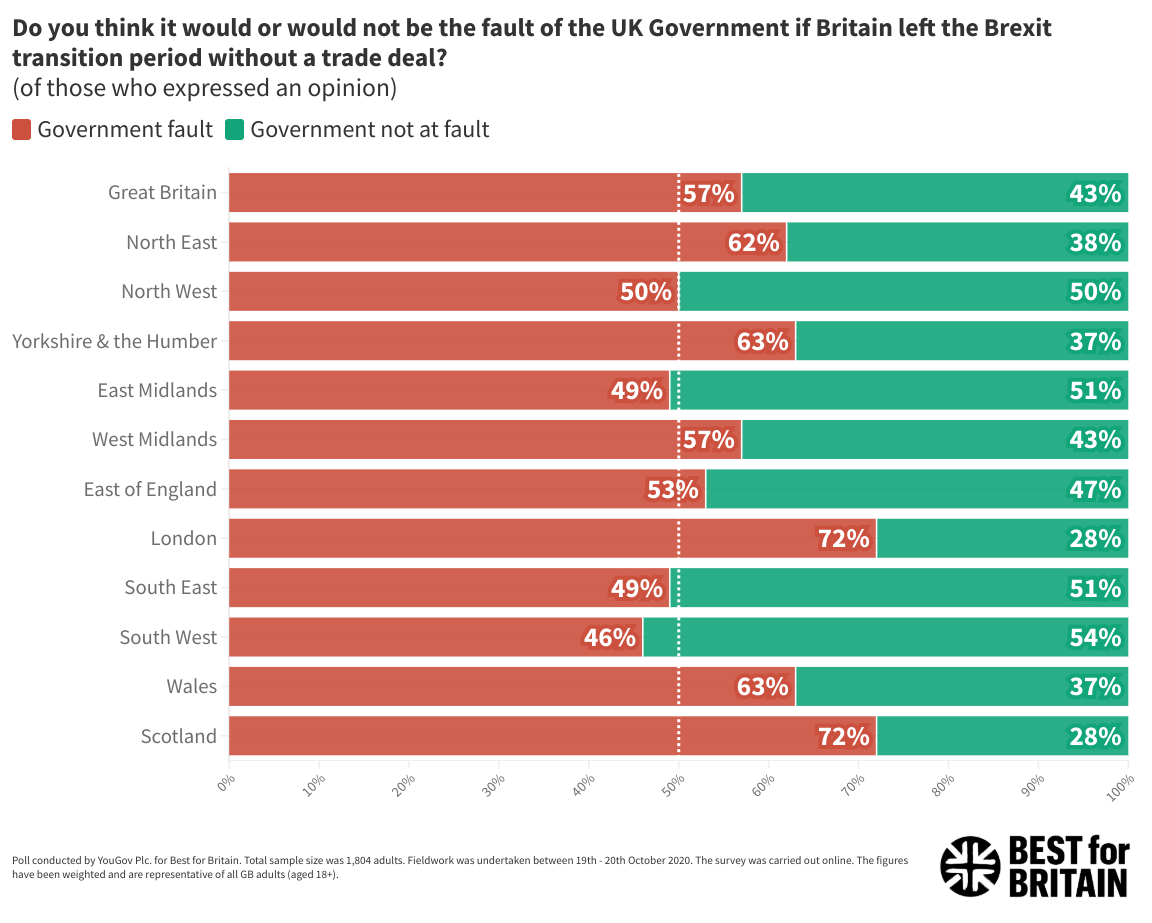 Respondents were asked to think about the UK leaving the transition period without a deal and then to say whether they thought such an outcome 'would have generally a good or bad impact' on:

Brits overwhelmingly believe that a no-deal Brexit would harm the UK economy according to the poll. 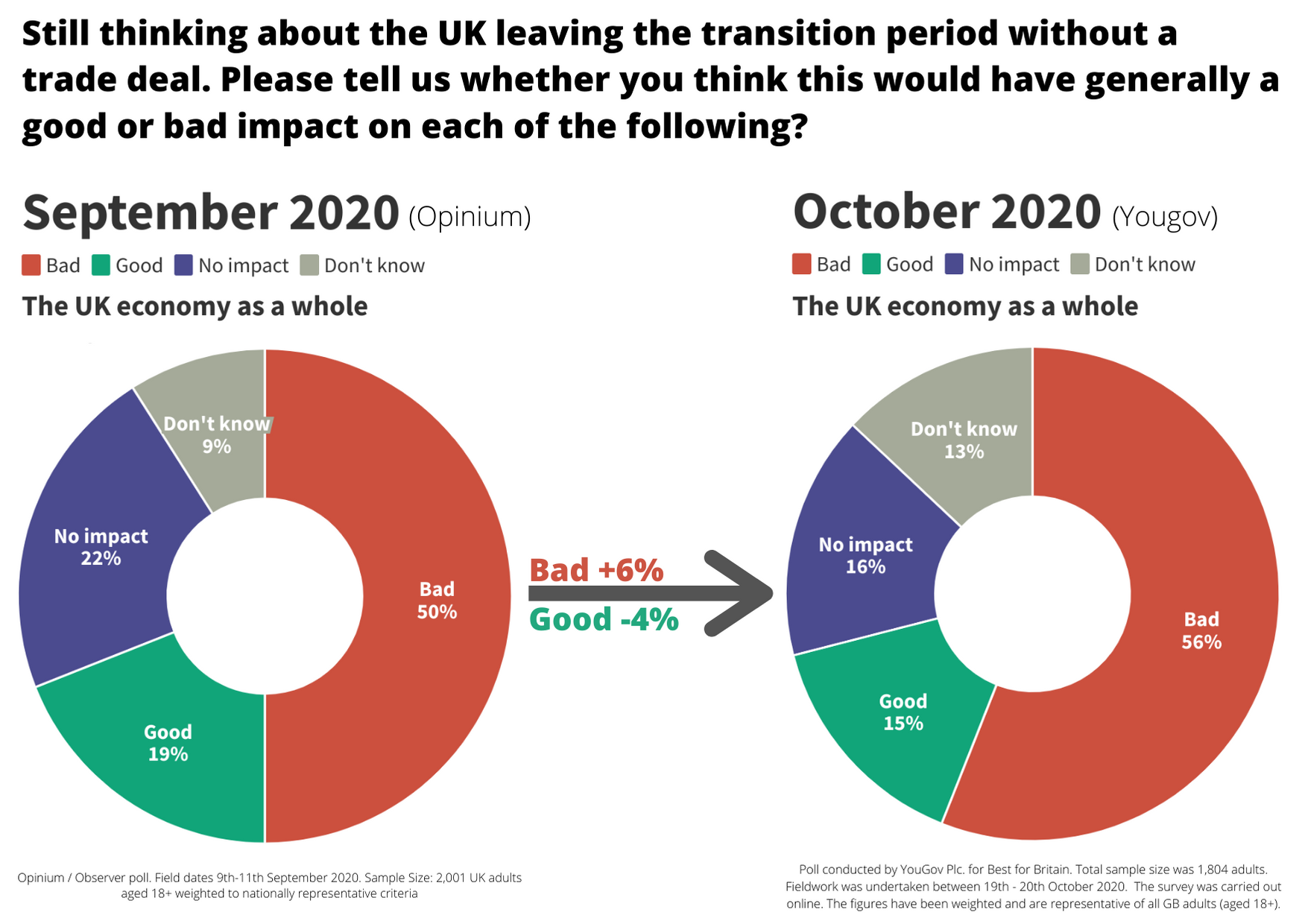 Just 15% of respondents said they thought a no-deal Brexit would have a good impact on the economy, of which only 3% thought it would be ‘very good’. That contrasts with the majority of Brits, 56% of whom believe that the economy will be negatively impacted – including a third of Conservative voters (30%). Around a third (29%) said they believed the impact would be ‘very bad’, rising to nearly half of Scottish respondents (48%). There was consensus among all age groups and UK regions that a no-deal Brexit would be bad for the economy.

A third of Brits (32%) also said they thought their personal financial situation would be negatively impacted by a no-deal Brexit, compared to just one in twenty who thought they would be better off. 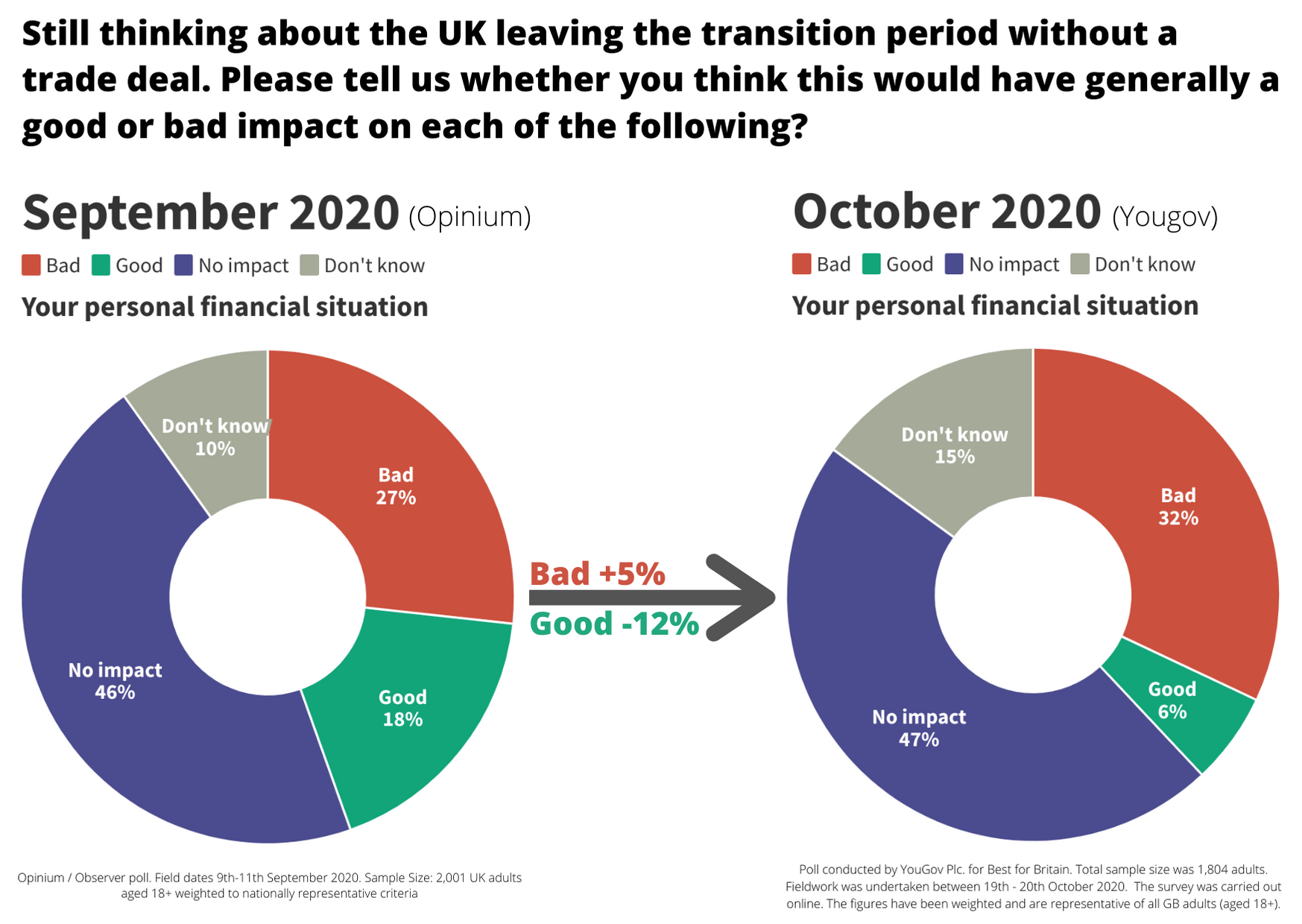 While half of Brits (50%) think that a no-deal Brexit would negatively affect the UK’s international reputation, just 17% think it would have a good impact. 29% of respondents believed the impact would be ‘very bad’. 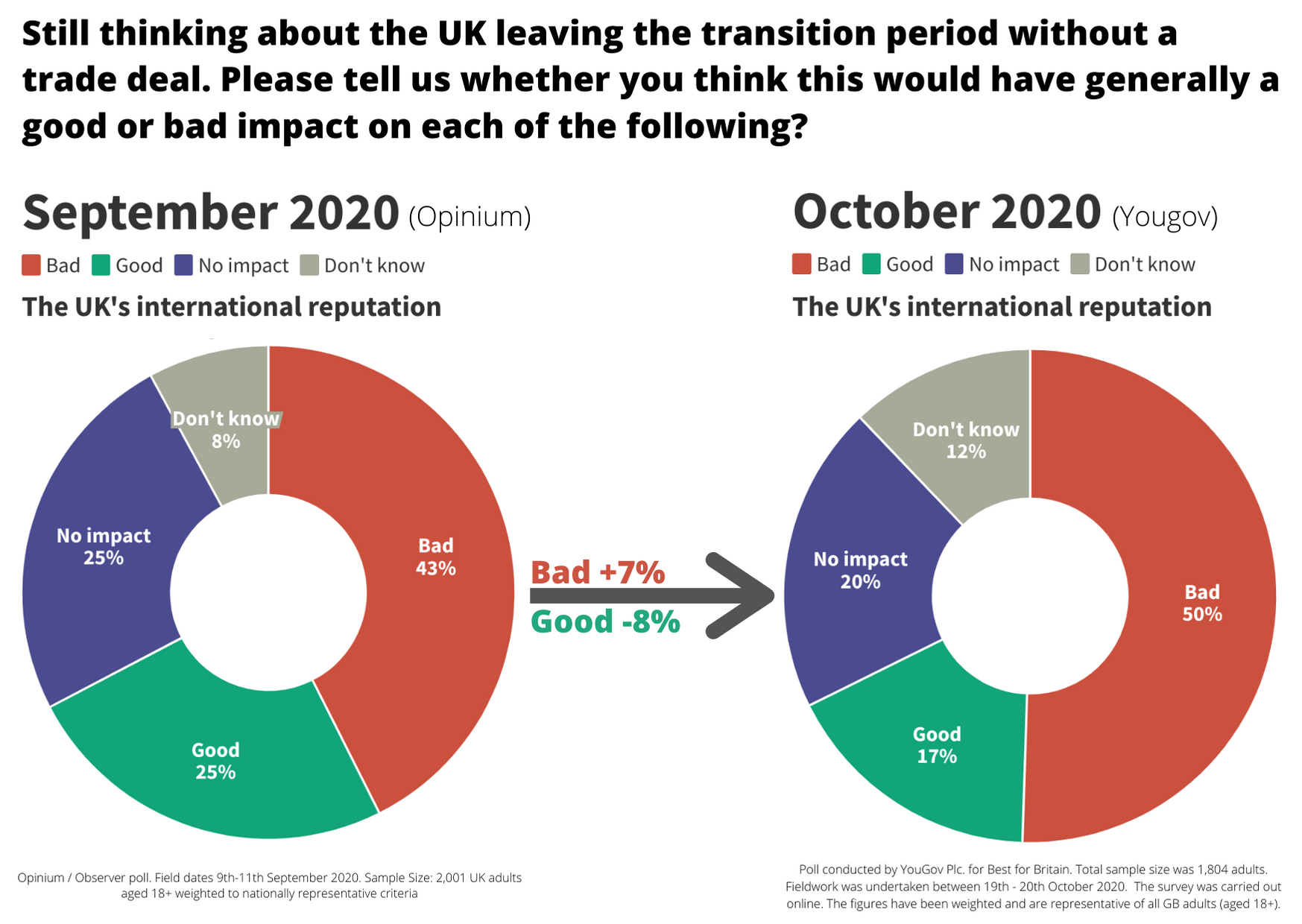 Young people aged 18-24 years old were the most likely to think ending the transition period without a deal would hurt the UK’s global position, with two-thirds (64%) supporting this view.

59% of respondents also said that a no-deal Brexit would harm Britain’s relationship with other EU countries, including 42% of Conservative voters. 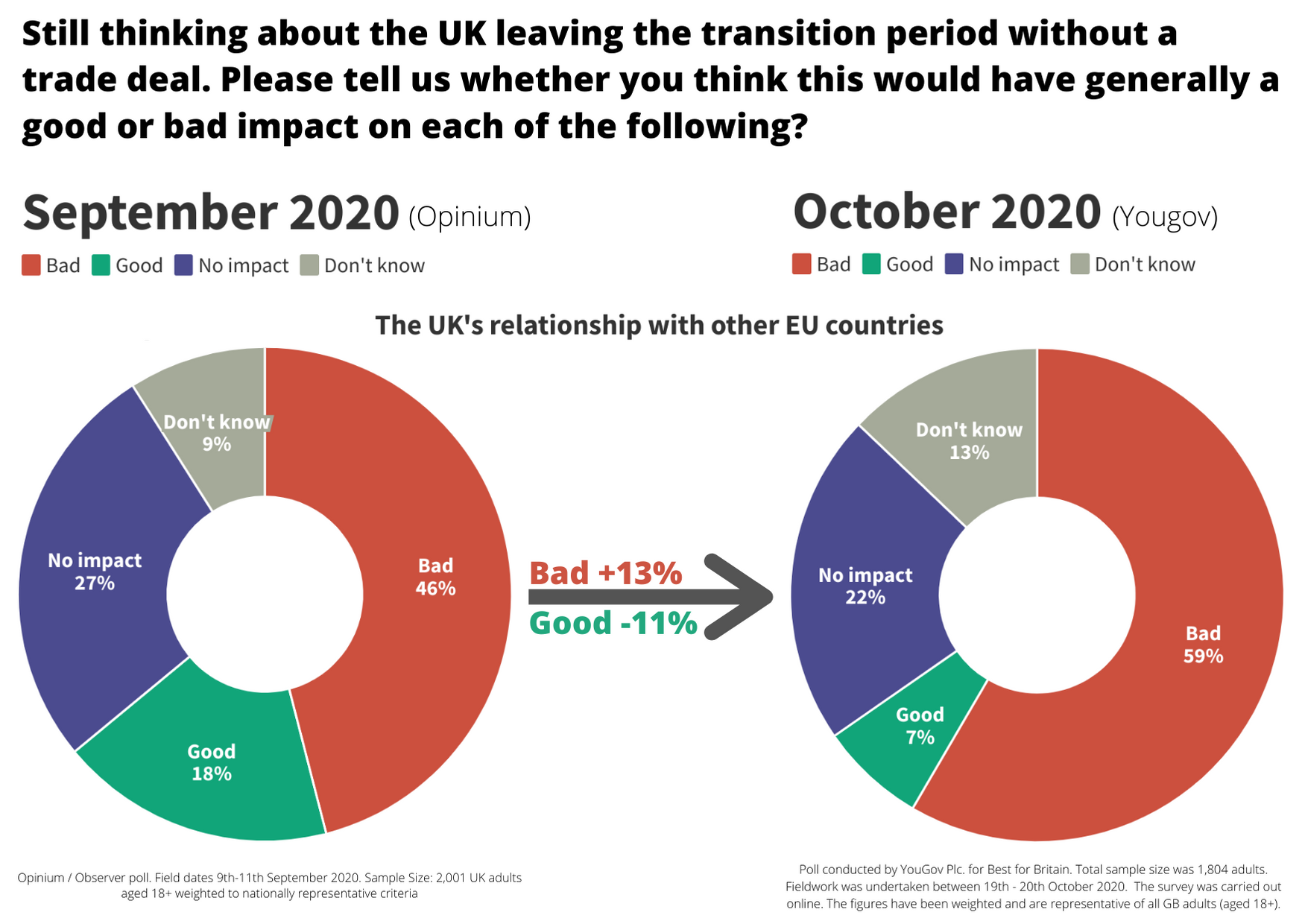 Ability of UK companies to trade inside/outside the EU

Brits overwhelmingly recognise that a no-deal Brexit would hurt the ability of UK companies to trade in the EU, with fewer than one in ten (8%) suggesting it would have a positive impact and 56% saying it would have a detrimental effect. 50% or more of every age group and UK region said they thought a no-deal Brexit would negatively impact the ability to trade in the EU. 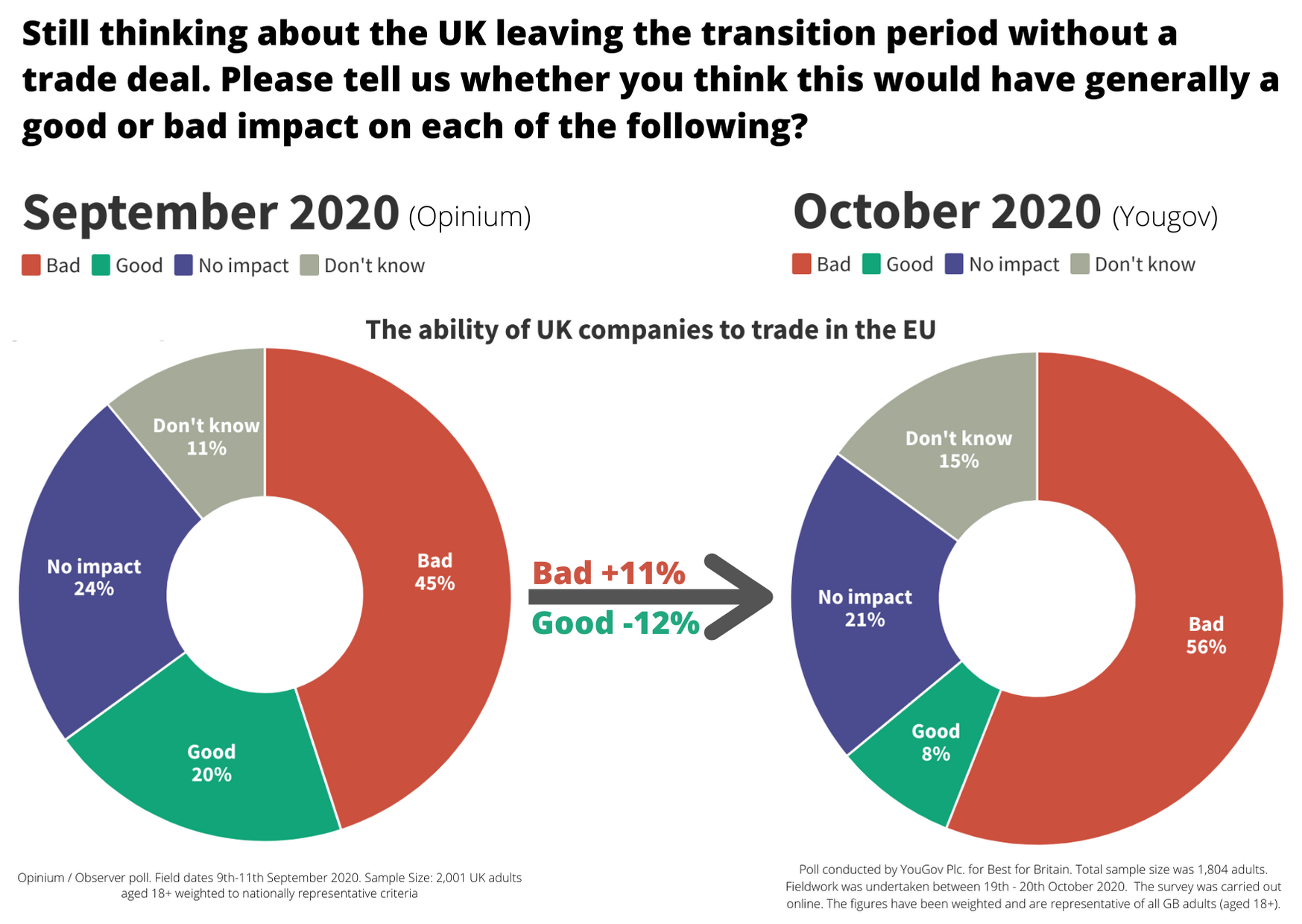 There was less of a consensus around the ability of UK companies to trade outside the EU, although even in this area Brits are just as likely to think a no-deal Brexit will have a negative impact (31% good; 31% bad). Just one in ten believe that it would have a ‘very good’ impact on the ability trade outside of the EU. 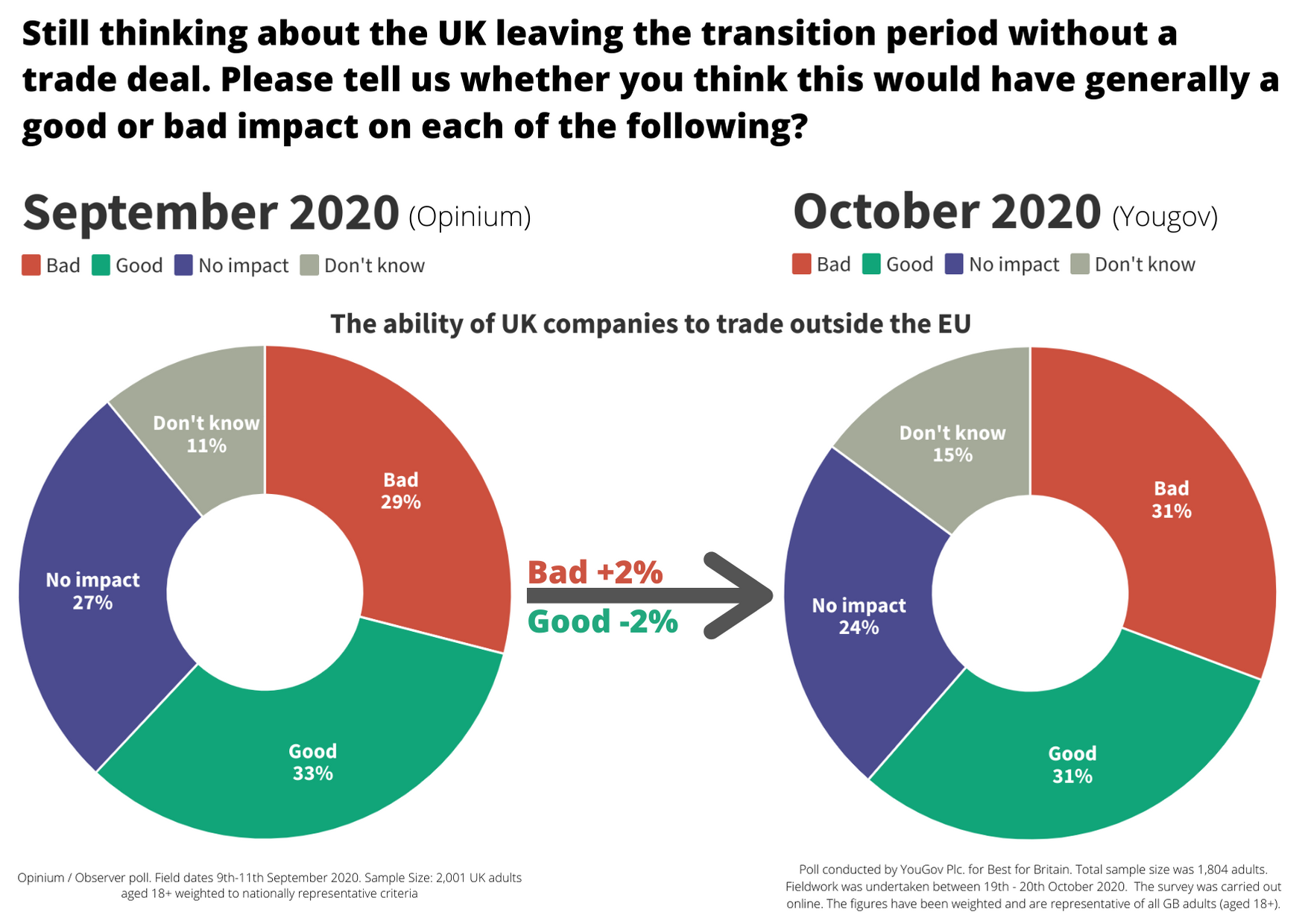 40% of respondents said they believed a no-deal would disrupt their ability to travel to the EU, compared to just 9% who said it would have a positive impact. 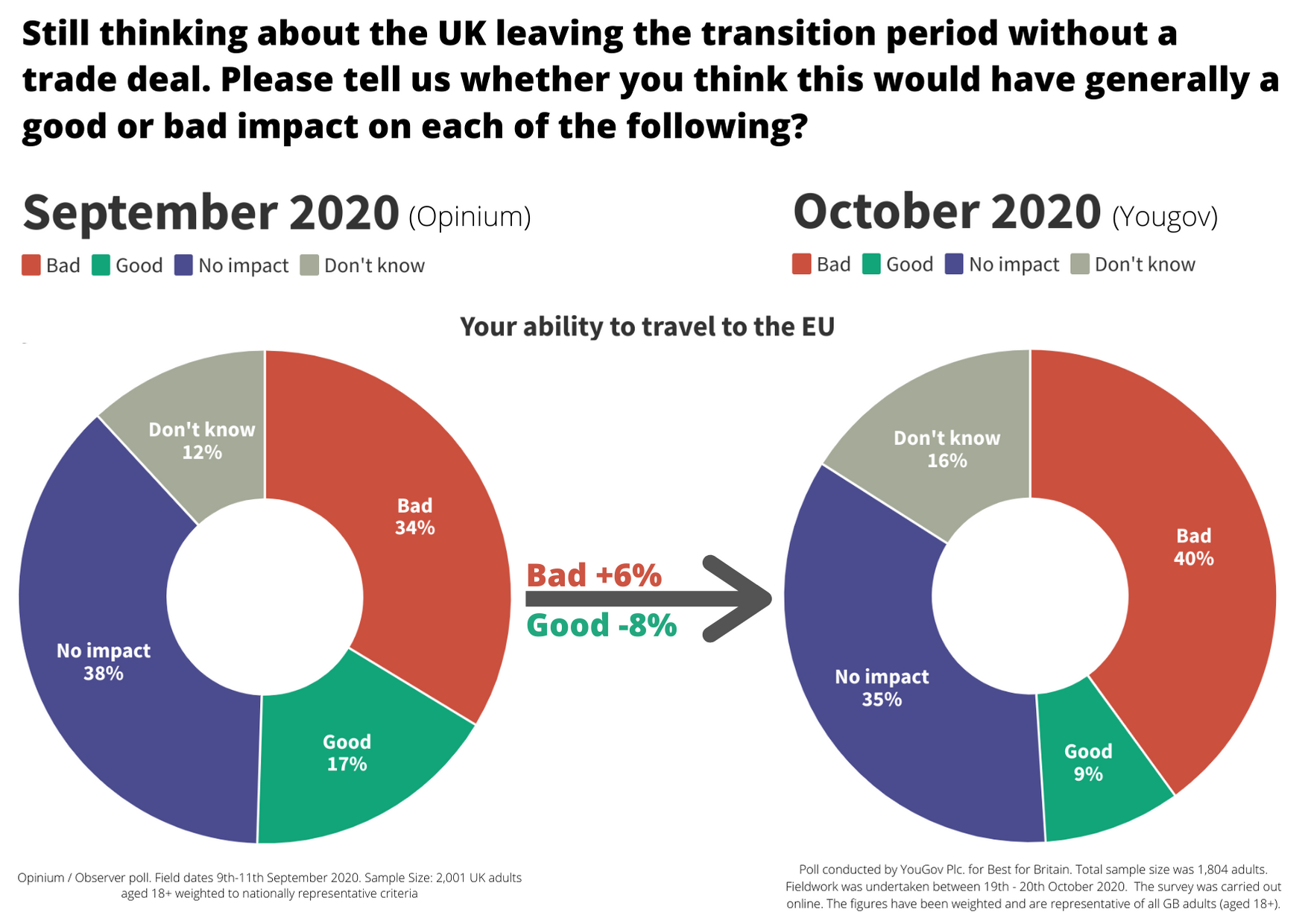 The survey was carried out online. The figures have been weighted and are representative of all GB adults (aged 18+).