Forming a key part of any Best for Britain campaign, Hey-MP.uk helps our supporters to send coordinated emails and tweets directly to their MPs - together we have changed the course of votes in Parliament and raised issues we care about to the top of politicians' minds.

Find out more about how it works below.

What's the point of writing to my MP?

Your MP is there to represent your community in national politics. So when you have an issue you care about, whether it's something that's already being debated in Parliament or something you think should be raised, it is important that you draw your MP's attention to it. They will only know what you care about and what you think they should do if you tell them! This is what we describe as the one-to-one relationship between a constituent and their MP.

If that isn't reason enough, by sending your MP messages through Hey-MP.uk you are taking part in a coordinated campaign designed to influence decision-makers and those with power to raise our issues at a national level. Where one message alone might prompt a response from a single MP, thousands or tens of thousands of messages from Best for Britain supporters to MPs acting together with a shared message will make a clear impact.

Using Hey-MP.uk to send a message to your MP helps amplify and target campaigns based on our shared aims and values direct to decision-makers. If you have signed a petition to make a public statement that many people support a campaign, contacting your MP is the necessary next step.

We have certainly had many campaign successes that relied completely or in part on messages sent through Hey-MP.uk.

For example in March 2021 more than 20,000 Best for Britain supporters used the tool to contact MPs about the UK Government's new Policing Bill, resulting in the Bill being delayed while Ministers and MPs reconsidered. At the time, one MP said "When they saw the revulsion from vast swathes of the country at this unfit Bill, suddenly we get a message saying 'the Bill committee won't start until later in the year'. [...] For that we have people up and down the country to thank who contacted their MPs, who made their voices heard." Read more here.

Hundreds of thousands of messages have been sent to MPs using Hey-MP.uk, influencing votes in Parliament and putting pressure on politicians to take notice of our supporters and campaigns. Best for Britain's supporters have won changes to laws, helped force the Government to make u-turns and raised issues we care about to the top of the political and news agenda. Together we make a difference.

Does it really make a difference to MPs?

Feedback we have received from MPs of all parties proves our Hey-MP.uk campaigns are heard: MPs tell us they appreciate hearing their constituents' views and that they make decision on how to vote and what action to take with their constituents' messages in mind.

For MPs who agree with our campaign aims, receiving dozens of messages from constituents as part of a coordinated campaign helps strengthen their resolve. It gives them proof they can point to that their constituents agree with their position. It helps them make the case theat their MP colleagues should also go along with them.

For MPs who don't agree with your aims, receiving dozens of messages from constituents may make them think twice. It will certainly push the issue up their agenda and mean they cannot claim their constituents do not care about the issue.

We know MPs talk to eachother. They are work colleagues as well as political allies and opponents. They talk in the corridors, and waiting in line to vote, and in the bars and tearooms, and over Whatsapp. It is extremely helpful to any campaign for MPs to be telling eachother how many messages they are receiving about it, to hear that other MPs have also been contacted about the campaign, to feel that the campaign is big and supported nationwide.

What if my MP won't listen?

It is entirely possible that your MP may not change their mind. But please do not let that hold you back from registering your concerns with your MP.

They may very well decide not to act on your wishes. But by sending them a message you make sure that they know many of their constituents have similar concerns and at the very least you make sure they cannot say that none of their constituents are worried about the issue. MPs talk to eachother, and even if a particular MP is unlikely to take the action we want, we still want them to be getting messages and to be discussing them with their colleagues.

Our campaign strategies take into account the fact that we know we may never convince every MP to back us. Some will already be on our side on a given issue; some will be persuadable to support our campaign; some will just be persuaded to not oppose or block our campaign; and some will disagree with us. But no matter where your MP falls on this spectrum, it is important that every MP hears about the campaign.

What if my MP doesn't reply?

MPs receive a high volume of correspondence, so are not always able to reply personally to every email. We also know that every MP manages their inbox slightly differently and it is factored into our campaign strategies that some MPs may not reply to emails sent as part of our campaigns.

We know from speaking to MPs that even when they don't reply to every message they do take note of the volume and sheer number of emails on a particular subject and it still influences them.

In fact, receiving a 'template' or generic reply from your MP rather than a personal one can actually be a very good sign tha the campaign is working - it probably means they have received so many messages on the subject they cannot possibly respond to them all individually!

By sending your MP a message as part of a coordinated campaign you make sure that they know many of their constituents have similar concerns and at the very least you make sure they cannot say that none of their constituents are worried about the issue. MPs talk to eachother, and even if a particular MP doesn't reply to emails or is unlikely to take the action we want, we still want them to be getting messages and to be discussing them with their colleagues.

How does it work?

Once you have entered your postcode into the Hey-MP.uk homepage, the site will identify your local MP and offer you the options available for contacting that MP. Generally you will see options to email your MP directly, tweet them on Twitter and share the campaign on Facebook.

If you choose to use Twitter or Facebook, clicking those options will open the desired social media platform with a template sharing message and URL link to the campaign. You will be able to edit the sharing message before you share anything publicly.

If you choose to send an email to your MP, clicking that option should open a new form at the top of the page asking you for your name and email address. These details will be used to create a personalised message to your MP. Once you have entered your details, click 'Go!'. The tool will then open your a pop-up window containing whichever email account you are logged into on your device (or that is the default for your internet browser) with the email text, your MP's name and email address and your name in the signature. All you have to do is click send. You can edit any part of the email before you send it.

Why is it different to other campaign email tools?

Hey-MP.uk is deliberately designed differently to other 'write to MP' tools. Instead of sending messages on behalf of users from a single email address or email server, Hey-MP.uk helps users send messages from their own email and social media accounts. This makes it much harder for MPs to filter or block campaign messages from HeyMP and means the campaign messages we send are more direct and personal.

Most other 'write to MP' tools send emails to MPs that just look like they are from an individual - they use an email protocol that essentially allows a single email server to send many emails but make them look as though they were sent by individuals. Because they all come from a single server there is a greater chance that they might be automatically filtered into spam or junk folders, or that an MP or Parliament's email servers could decide to manually filter them out.

Hey-MP.uk avoids those problems entirely as all the messages really do get sent from individual supporters' own email accounts.

What do I do if it didn't work on my device?

If you clicked 'Go!' and nothing happened the most likely reason is because your browser settings have disabled pop-ups, or you have ad-blocking software installed that blocks pop-ups. You can check your settings and make sure pop-ups are allowed for the hey-mp.uk website and try again, or you should find that a message appeared on screen saying "if nothing happened, click here". 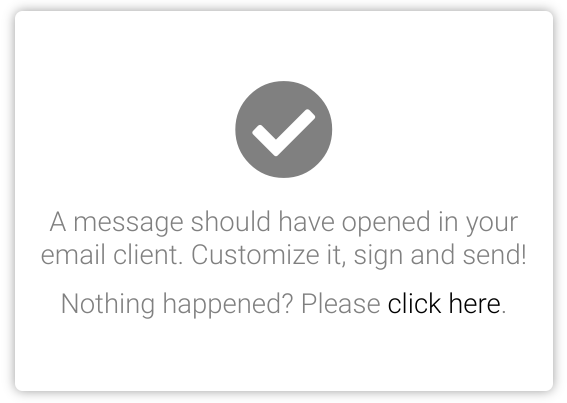 To send your message manually, while on Hey-MP.uk, click on that link and the website will take you through a three-step process which allows you to manually copy and paste your MP's email address and the template campaign email text into your own new email.

Will my MP appreciate being addressed 'Hey MP'?

Hey-MP is the name of our online tool that helps connect voters with MPs. Though we use the 'Hey MP' language in less formal settings (like social media and our own campaign emails), all formal templates in the system (like emails to MPs) address MPs 'Dear...' and we have tried to take account of any Drs, Sirs, etc. We are in regular contact with MPs from all parties and have used our extensive experience and knowledge of both political engagement and social media to make sure we are hitting the right balance.

Additionally, all of the templates in our system are editable by users before they send. Because HeyMP does not send anything on anyone's behalf, all it does is open your own email account (or Twitter, Whatsapp, Facebook accounts) and fill in the text, it is up to each person to review that text and change it as they see fit before deciding to click send.

Why are the messages different for different MPs?

Hey-MP.uk allows us to create campaign strategies with tailored messages to MPs. That means we can use our knowledge and political expertise to make sure each MP receives messages that are going to be influential on their opinion or which match or respond to the positions they or their party have taken previously on a campaign issue.

At its simplest, it means when certain MPs have already declared their support for Best for Britain's campaign aims we can update Hey-MP.uk so that the email and Tweet templates thank them for their support. But it allows us to do so much more - we can tailor messages down to individual MPs and update the templates in response to events.