‘Nul points’ for the government’s handling of foreign language education

By Cal Roscow,
Director of Development, Best for Britain

UK viewers of Eurovision have much to lament this year, but beyond the song choice, the singer and scoring ‘nul points’ from both the jury and the European public - the real embarrassment came from one minute of Amanda Holden - deftly offending the Dutch hosts, as well as the French in under 60 seconds.

Appearing from London, the Britain's Got Talent (ahem!) presenter uttered: "Bon soir. Goedenavond. That is ‘good evening’ in French and Dutch although I've got absolutely no idea which is which!" And in so doing, summed up everything wrong with the UK’s approach to language learning.

In 2020, the British Council found that foreign language lessons were continuing to decline and approaching a ‘crisis’. Of the 6,000 schools asked whether they taught languages other than English, Welsh and Scots Gaelic, only 10% of them responded. And of those 60% said they provide no international engagement at all, with the number of schools employing a Foreign Language Assistant halving since 2018.

As expected French remains the most popular language, although proportionally Spanish is showing signs of growing, and exceeding French at A-Level. But one teacher was quoted in the report as saying “Students perceive languages as too difficult or often say that they don't see the value of languages when everyone in the world speaks English!”

And herein lies the problem. Indeed the Eurovision Song Contest itself is performed entirely in English; not just the presenting, but most of the songs themselves too.

But for a country now pursuing a path of ‘global Britain’ - the need to engage with corners of the earth where English is losing ground as the universal language has never been greater. While the UK government talks up hopes of a trade deal with India, the country is the Asian epicentre of the collapse in English proficiency. Thailand, Singapore and even Hong Kong show similar signs. 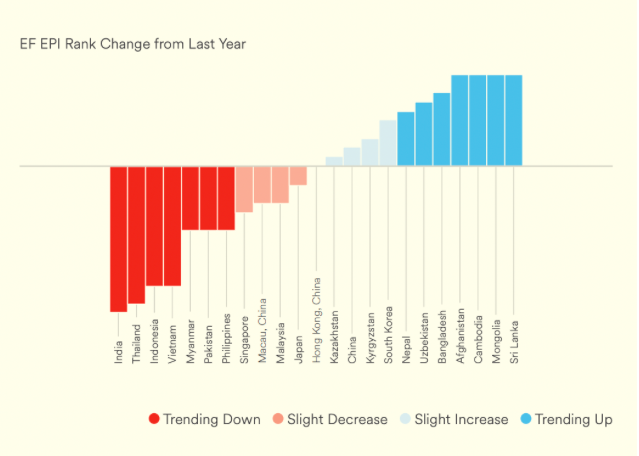 Following Amanda Holden’s embarrassing stint, the youngest ever presenter on Eurovision, a ten year old called Manolis Gkinis from Greece, announced the results from his country, and in perfect English…

So if the British government is as serious about global trade as it says it is, it’s time to invest in Foreign Language education in our schools, or Eurovision won’t be the only thing that we’re losing.

If you want to see Best for Britain continue to promote cross-border working between countries, consider becoming a regular supporter. You can find out more here.