Remain campaigns align ahead of election

THE three biggest campaigns supporting Remain have issued a statement of unity ahead of the general election.

People's Vote, Remain United and Best for Britain have come together to issue a joint statement for those who want to stop Brexit to work together by voting tactically.

The three groups have three different tactical voting websites, but are agreed on the way to vote to block Brexit in almost every marginal seat.

Vist GetVoting.org to get your final tactical voting recommendation.

Election day is Thursday 12th December.
Polling stations will be open 7am to 10pm. 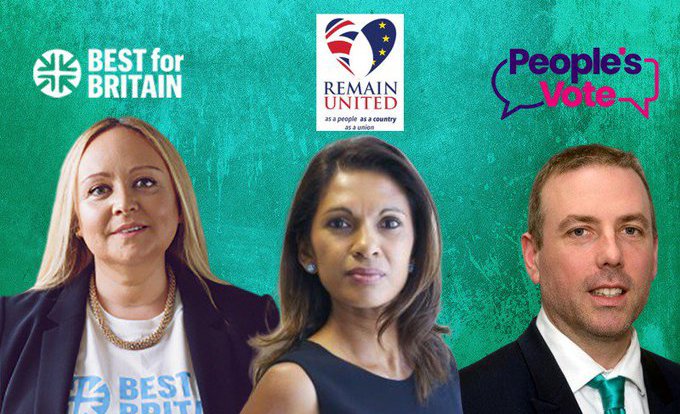 Electoral rules stop the groups from getting behind one website - however with just three days to go before the election they are in agreement on the way to vote in almost all marginal seats that are most likely to be turned by tactical voting.

Speaking with one voice, they are asking voters to go to any one of their tactical voting sites to find the MP most able to block a Conservative majority.

Without a Conservative majority it is believed a remain alliance of parties will form to achieve a second EU referendum.

“In these final few days of the election campaign, as voters make up their minds, the choice has never been starker or the consequences more profound.

"That's why Remain United, People’s Vote and Best for Britain are speaking with one voice to remind voters of the power of their own voice and their ability to defeat the Tories in dozens of key target and marginal seats around our country.

"The only option left to voters wishing to avoid the dire consequences of Boris Johnson’s Brexit on the UK is to vote tactically on December 12.”

The statement comes on the back of fresh MRP polling from Best for Britain which shows the Tories lead more than halved from 82 to 40.

If pro-EU voters use their vote tactically, however, a hung Parliament is likely. Best for Britain has identified the 36 marginal seats where tactical voting is most likely to be successful. These are seats where it would take 2,500 tactical votes or less to prevent a Conservative hold or gain.

Across these seats it could take as little as 40,704 tactical votes to prevent a Johnson majority. Under this scenario, the Conservatives would win 309 seats, Labour would win 255 seats, Lib Dems would win 14 seats, Greens would win 1 seats, Plaid would win 3 seats, and the SNP would win 49 seats.

Remain United are releasing their own MRP update later today, which is expected to reinforce Best for Britain's data and target seats.

What happened at the press conference?

At a press conference in Westminster today organised by Best for Britain to release its latest seat-by-seat MRP analysis of voter intentions for the upcoming general election, Best for Britain and the People’s Vote campaign presented a comparison of each other’s tactical voting recommendations.

The analysis showed that if pro-EU voters use their vote tactically in key marginal seats, a hung Parliament and final say referendum is likely.

The success of tactical voting will therefore depend on voters in marginals being reliably informed about the candidate with the best prospect of preventing a Conservative hold or gain. The two biggest anti-Brexit organisations in the UK which are running tactical voting websites - Best for Britain and People’s Vote - agree on all recommendations in marginal seats other than Kensington, where a Best for Britain recommendation is pending. Remain United, founded by Gina Miller, is only in disagreement on two marginal seats (an update is expected tonight, which will reinforce Best for Britain's target seats).

Other key findings from Best for Britain's press conference: