The UK is internationalist by instinct

Brits are more open to the world than we sometimes assume. And Best for Britain’s new Internationalism Index gives us insight into the hearts of UK voters.

More than three quarters of people in Britain want a close relationship with the EU and more international cooperation on a host of issues - including a majority of people who voted to leave the EU.

RT if you agree. Let our message be heard. ~AA

What if I told you that the median voter in the UK is internationalist in outlook, supporting cooperation with other countries on a wide range of issues? That more than three quarters (76%) of this group believe Britain is better off solving the world’s greatest challenges through international cooperation, while only 15% disagree? And how about if I told you over half (54%) of this group voted Leave? 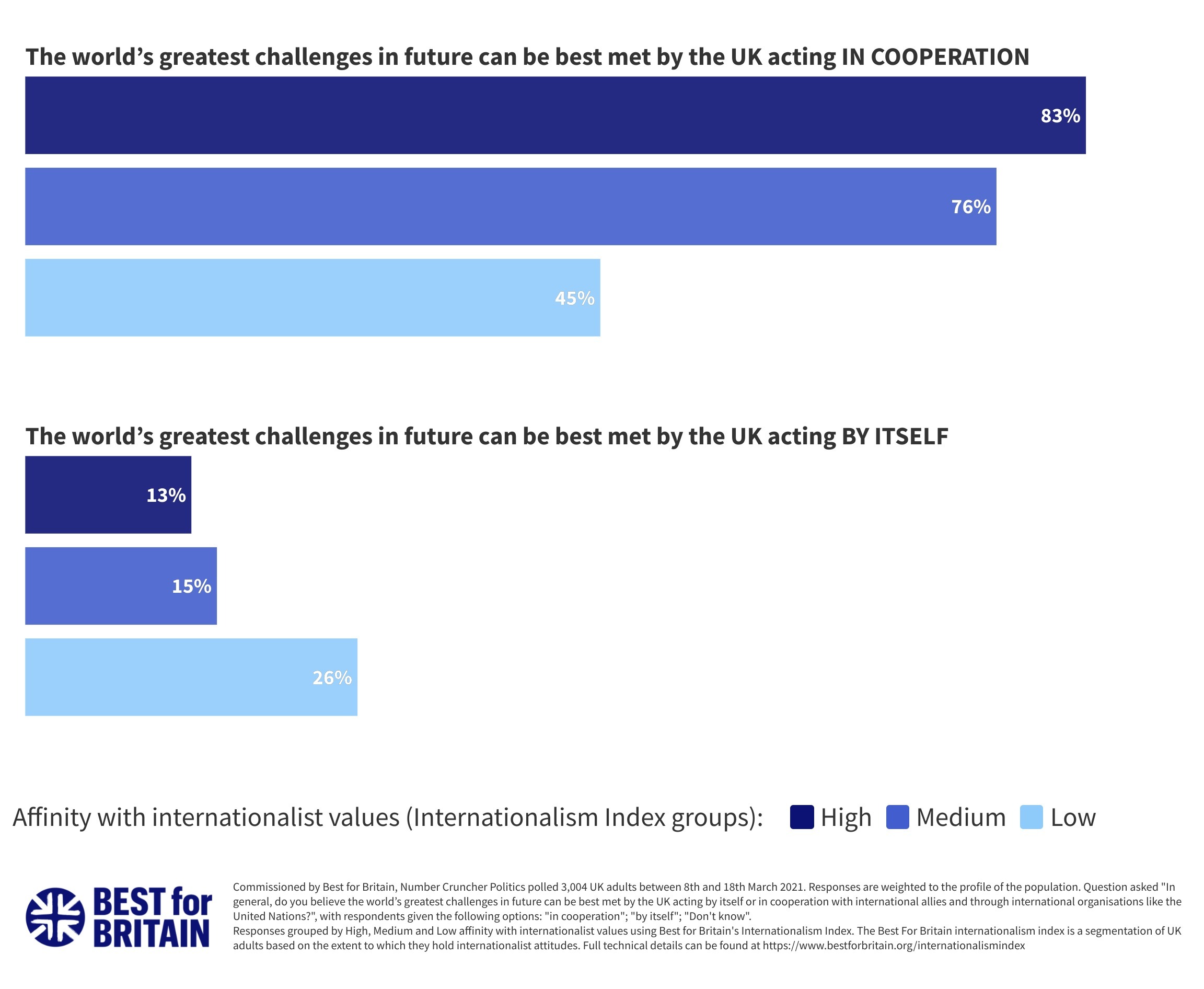 Best for Britain’s new Internationalism Index, provided by Number Cruncher Politics, helps deepen our understanding. It seeks to look beyond the simple narratives of elections and to get at what people really feel about issues. It shows us where Leavers and Remainers, Conservatives and Labour voters all have common ground on working with the world.

Simple narratives are seductive. Johnson’s government keeps coming up with policies that isolate the UK, that reduce our international relations to a distrustful mess and that limit opportunities for British people and businesses to live and work across borders. And people keep supporting him, so they must be isolationists too, right?

That’s not what we’ve found.

Here’s what we did: Number Cruncher Politics polled 3,000 UK adults between 8th and 18th March 2021 on their opinions about UK citizens’ identities and rights, on different aspects of Britain’s relationship with other countries, on UK membership of international organisations (like the UN, WHO and WTO) and on the best way for Britain to approach and fix challenges it faces (like climate change, pandemics, security, and so on).

Each person who took part in the poll was then given a score based on their answers and we split them into three equal sized groups of those with ‘high’, ‘medium’ and ‘low’ internationalism scores.

We could then look back at all the other questions we asked in the poll and see how each group responded. The results were illuminating, and heartening.

On the importance of learning about other cultures, 85% of the medium group agreed along with 96% of the high internationalism group. So these groups that represent two thirds of the population both agree with us by a huge majority. 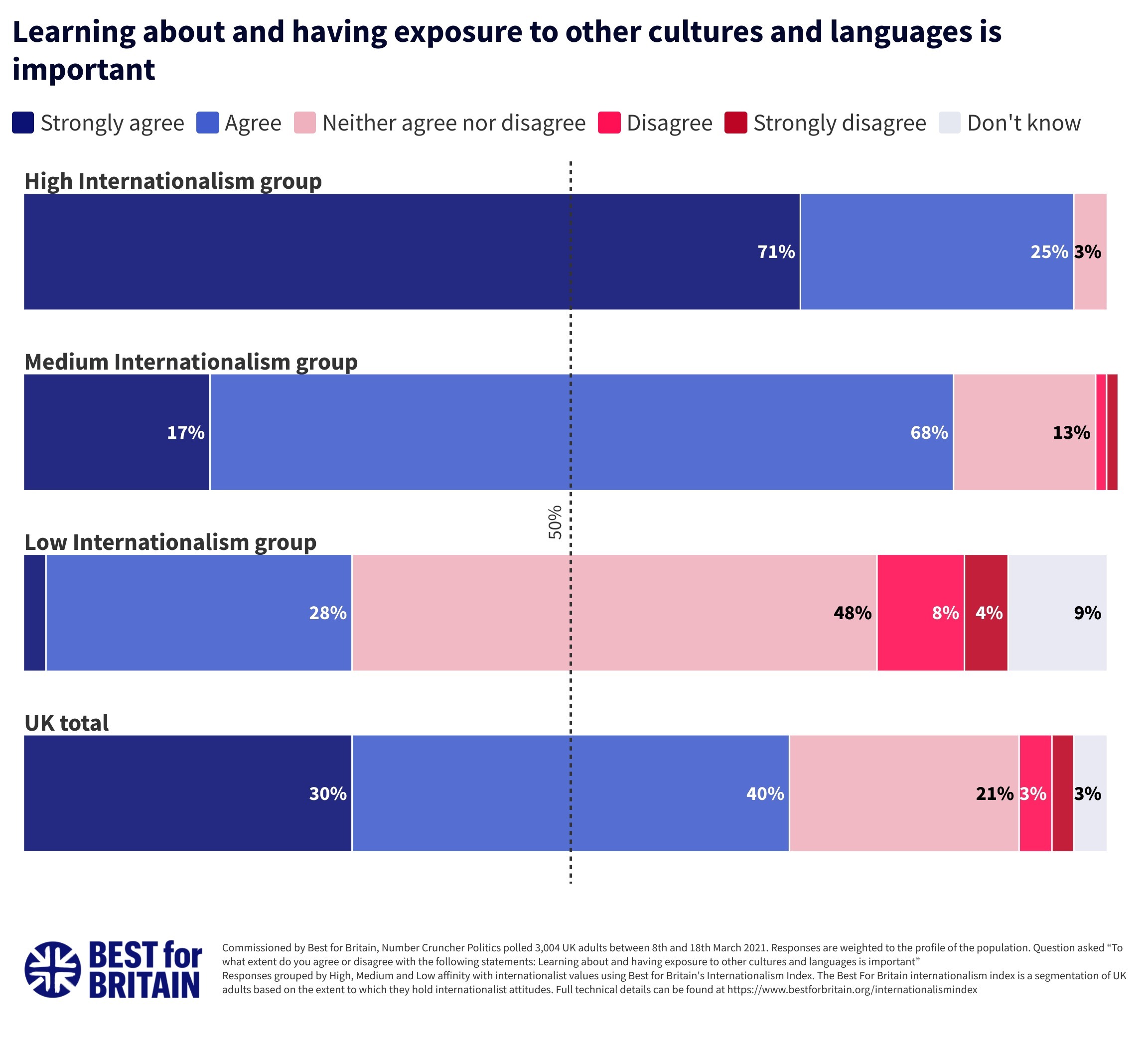 On whether people can have multiple identities (and we gave them the example of being both British and European), 68% of the medium group agreed. 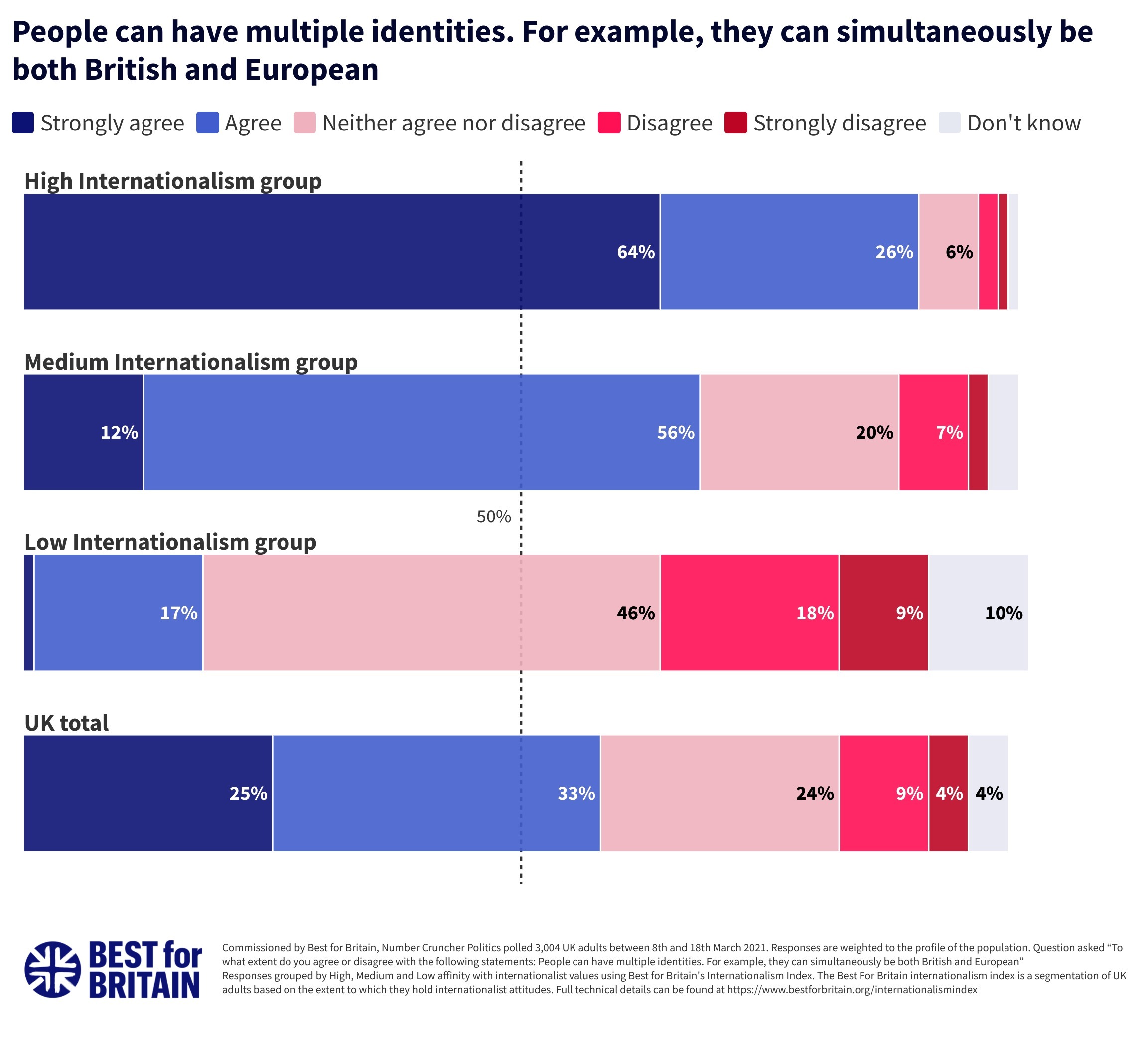 On whether it’s right to work with experts from other countries and accept that Britain alone can never have all the answers, 84% of the medium group agreed. 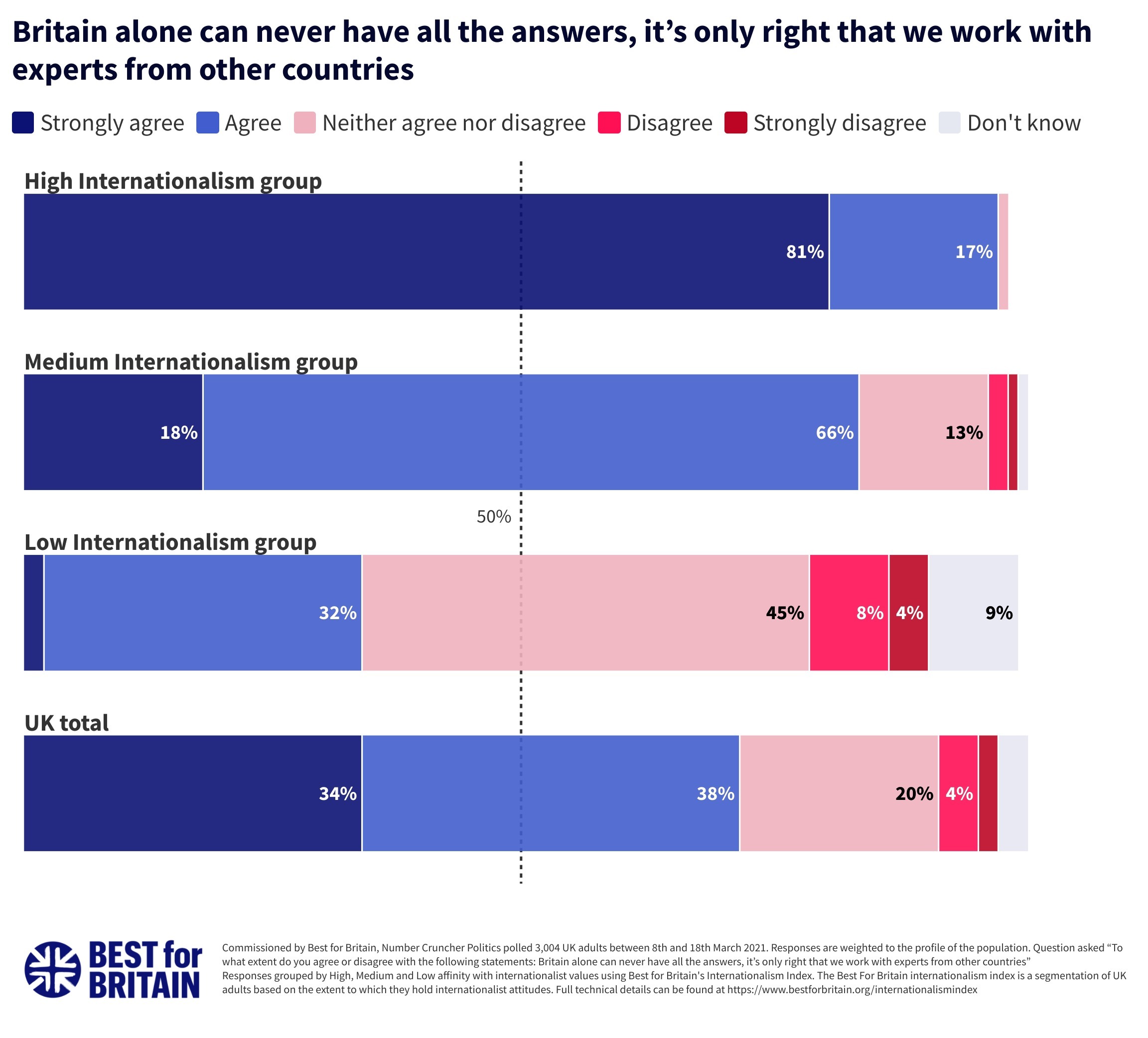 These are all questions of instinct. They help us understand what people in the UK feel is ‘common-sense’. Clearly the ‘median’ UK voter is instinctively open to internationalism. In all these questions, the groups representing two thirds of the UK population - those who scored in the medium and high internationalism categories - agree by significant majorities that we’re better off working with the world and looking outwards.

On whether international organisations like the UN and WHO have an important role to play in solving the world’s problems, 86% of the medium group agreed.

On working with other countries to set global trading standards instead of imposing the UK’s will on others, 79% of the medium group agreed.

On the subject of international bodies, the medium group said the UK should cooperate with them on trade (87%), regulating social media companies (74%), peacekeeping (86%), policing and security (83%), climate change (88%), opportunities for young people to work or study abroad (82%) and reducing world poverty and hunger (83%). 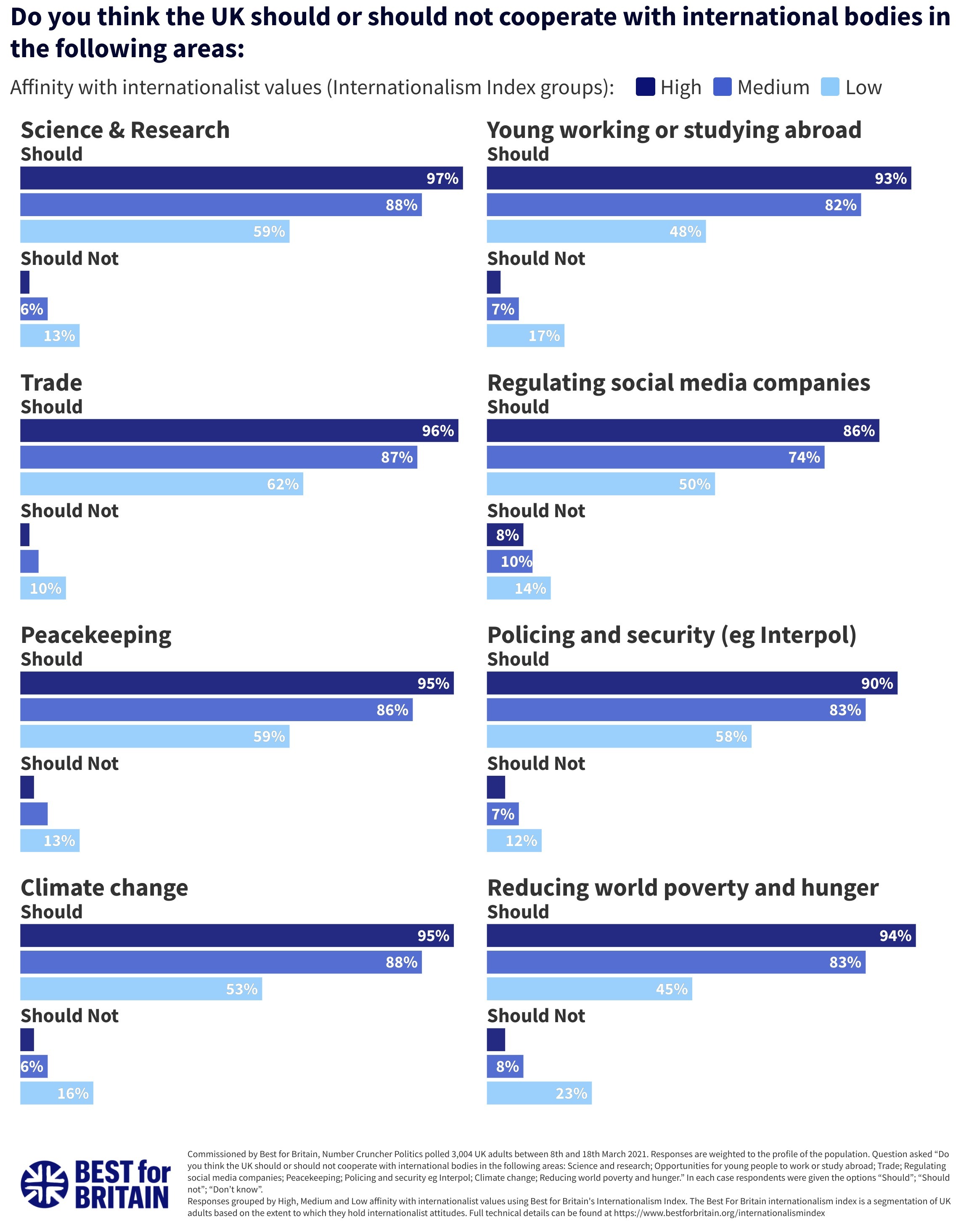 These are all questions of practicality, and we can see the instinct of the large majority of UK citizens translates into practical internationalism. That is, British people want the UK to fix the world’s problems through cooperation rather than trying to do it all alone.

What unites us is our openness

What the Internationalism Index is telling us is that once we step outside of whether you’re a Labour voter, a Brexiter, a progressive or a conservative, actually we are an internationalist nation. Actually, we are a people who instinctively want to reach outwards to the world and work with others.

The tribalism and division we see on the news and played out in Parliament does not reflect what’s in the hearts of the people of these islands.

Best for Britain is taking up the fight for the values shared by so many. Values of openness, of cooperation, of tolerance and of a truly global Britain. So much of our national debate in politics as well as down the pub (now that they’re open again) assumes that certain people or certain areas or certain types of British person are closed to the rest of the world. And that assumption colours the decisions our leaders make, and the reputation our country has around the world and even affects the confidence each of us may have to voice our own values in our daily lives.

The polling included in this post was commissioned by Best for Britain and conducted by Number Cruncher Politics. 3,004 UK adults were polled between 8th and 18th March 2021. Responses are weighted to the profile of the population.