We’re all likely to feel the pinch this winter. We’ve seen what supply disruption can do to our daily lives and we’re all nervously waiting as inflation takes hold and taxes rise. And with our Government’s continued intransigence on the Northern Ireland Protocol, we wanted to explore what impact this would have on the ground. Many Brits are already living through a cost of living crisis - can we afford to let things get worse? 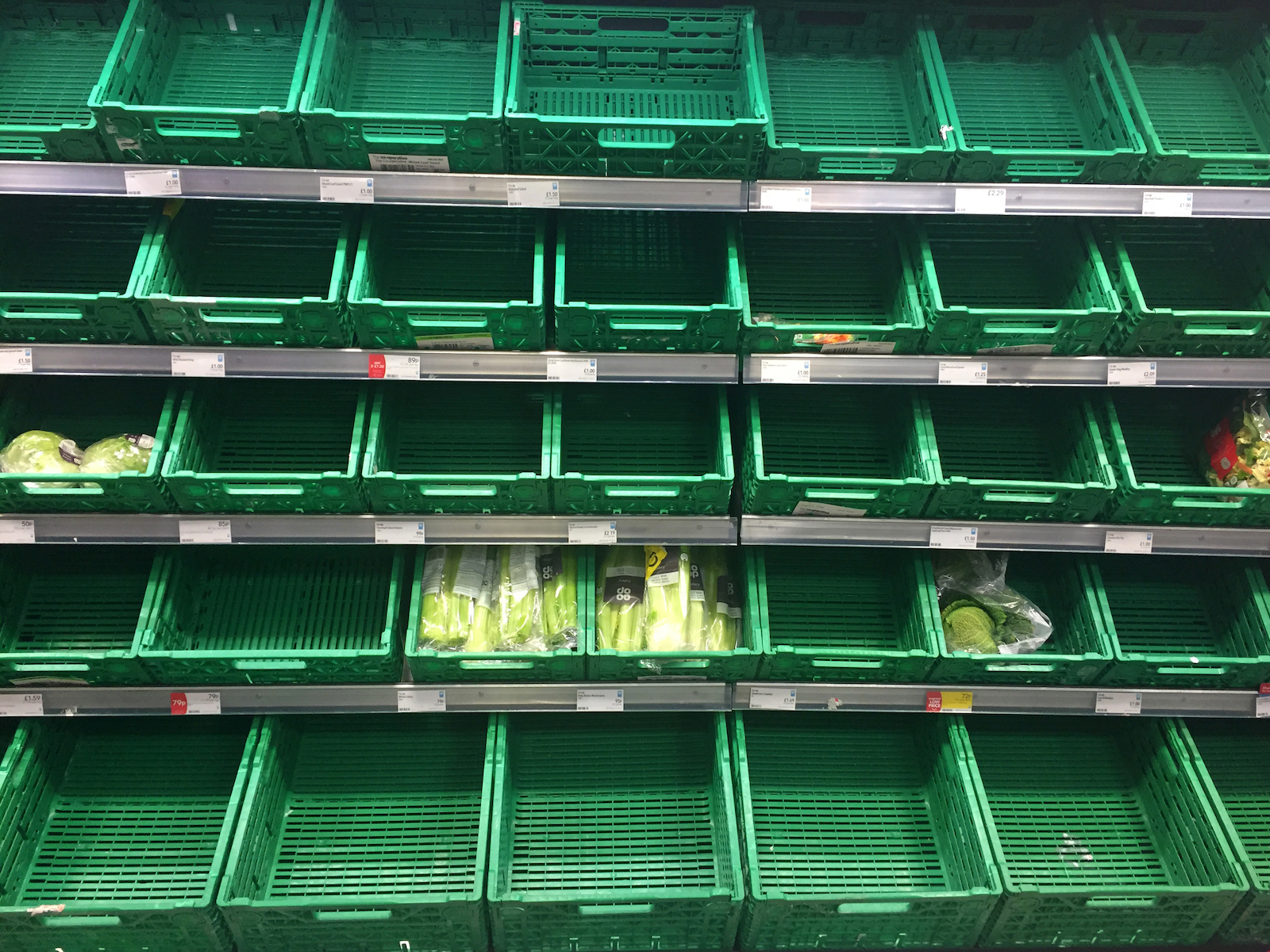 We conducted a survey of our supporters to find out what was affecting and concerning them most. We certainly expected many of the results we found, but we felt that our survey really shone a light on just how widespread and hard-hitting the current crisis is. These are some of the topline results:

As you can see, the vast majority of our respondents have been affected by food shortages over the past few months. But this isn’t a crisis that has just arisen in the short term. When asked about their standards of living, the majority of those who answered (50.8%) said that they had noticed a decline over the past two years. Food shortages and a fuel crisis may seem new, but they are in fact symptoms of an ailing system that has been slowly but surely under-serving its people over time.

Indeed, the lack of HGV drivers is not an issue that has arisen out of the blue. While Brexit has exacerbated the shortages of drivers, leading many European drivers to leave the UK and not return, the Road Haulage Association has been warning about issues with recruitment in the sector for some time.

Even prior to Brexit and Covid, the industry was stretched to breaking point, lacking 76,000 drivers from its workforce. A change to lorry drivers’ tax codes left many out of pocket and, combined with poor working conditions in the UK, made the work itself seem less and less worthwhile. Many of those who left the UK to return to Europe found they were better protected under the employment laws of countries like France and Germany. The HGV driver workforce was and is ageing, with just one in 50 drivers under the age of 25.

By failing to heed the repeated warnings of the Road Haulage Association, our Government knowingly walked into a situation where a vital industry was on its knees. Now, despite issuing emergency temporary visas for EU-based HGV drivers to work in the UK, just 127 have taken the UK Government up on its offer.

And it is this kind of last-legs politics, a failure to prepare or plan, a failure to consider the worst case and a failure to offer support before a crisis hits, that is now spilling over and severely affecting the day to day lives of Britons across the country.

In our survey, we asked those who said they had experienced food insecurity what they felt the causes of this were. High on many people’s lists were the increased cost of food and the increases they had noticed in their energy bills.

Energy is yet another sector where the Government has adopted a strategy of failing to plan. While the gas crisis currently unfolding is global, Britain is in a far worse position to face it than many other nations.

Not only has the Government failed to invest in sustainable and good housing stock for Britain (Britain’s homes ‘leak’ heat at three times the rate of those in other European countries), but it also has less than 1% of Europe’s total gas storage, meaning it is particularly vulnerable to price shocks from the volatile gas market. Ahead of COP26, the Government made several promises regarding the provision of sustainable and economical heating for homes through heat pumps. Yet the small print made clear that the grants it was offering would not nearly cover the costs of expensive heat pump installation. Add to this the lack of commitment on home insulation and it’s easy to see that this is a plan with many holes in it.

Also of concern to our survey respondents were rising food prices. While increases and issues of ‘shrinkflation’ are definitely hitting the shops, it is actually the case that Britain has long had some of the lowest food prices in Europe. What really squeezes ordinary Britons’ pockets is high housing costs. After Monaco, well-known as a playground of millionaires and billionaires, Britain has the highest housing prices in Europe, while tenants pay higher rents than anywhere on the Continent. Rising food prices hurt Britons not because food costs are already high but because many Britons are barely managing to get by when the cost of a home is sky-high.

This is a situation that Brits have had to deal with for a long time - and nothing has been done about it. The construction of homes for social rent has been in free-fall, and instead of genuine affordability in accommodation, all we got was Boris Johnson (in his tenure as Mayor of London) changing the definition of ‘affordable’ rent so that it meant 80% of market rent - not much consolation when the market is broken.

We found that perceptions and experiences of the cost of living crisis in Britain were very real. We are heading for a real storm this winter, but judging by our Government’s track record, there are unlikely to be any measures in place to protect us from it.

This Government cannot recklessly adopt a strongman position in negotiations with the EU just to create a scapegoat for its own failures. People in the UK are already living on the edge - and to push people further away from security and isolate them on a perilous precipice is neither good politics nor kind politics. As we await the result of Frost’s negotiations with the EU, we may feel that hope is slipping away.

But if you want to take some small steps to making a difference, you can. Head to our Food Poverty is not a Fair Trade campaign to see how you can show this Government that it must abide by its duty to protect the people of this country. There are several actions you can take, from writing to your MP or local paper to signing our petition - head to the page to find out more.