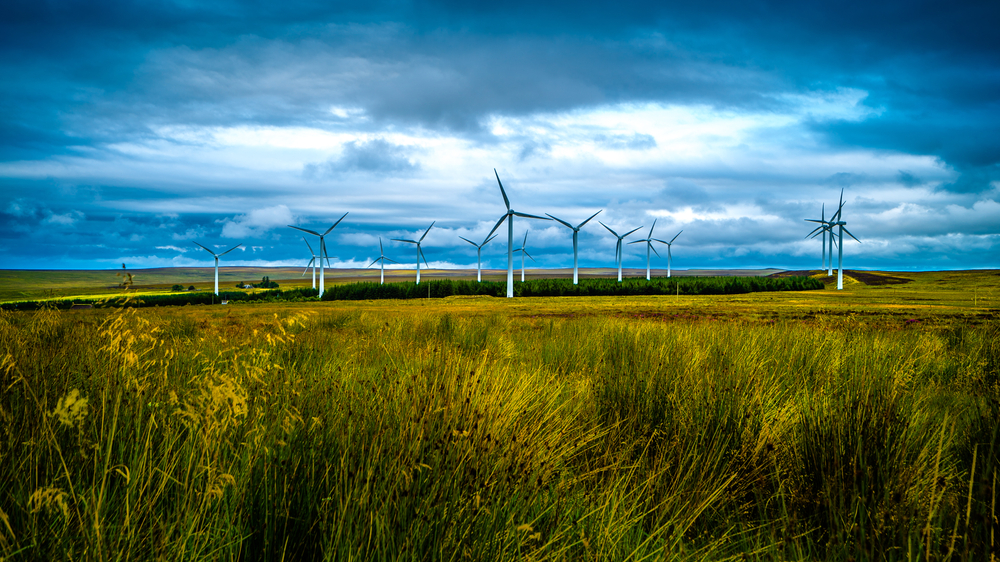 A green and fair recovery, prioritising sustainable jobs, renewable energies and low-carbon industries, has emerged as almost a consensus position in UK politics. This is reflected in the attitudes of the British people. Leading the international response to climate change was one of the UK’s most important responsibilities for most people polled.

Fig.9 Which of the UK's responsibilities are most important to you? 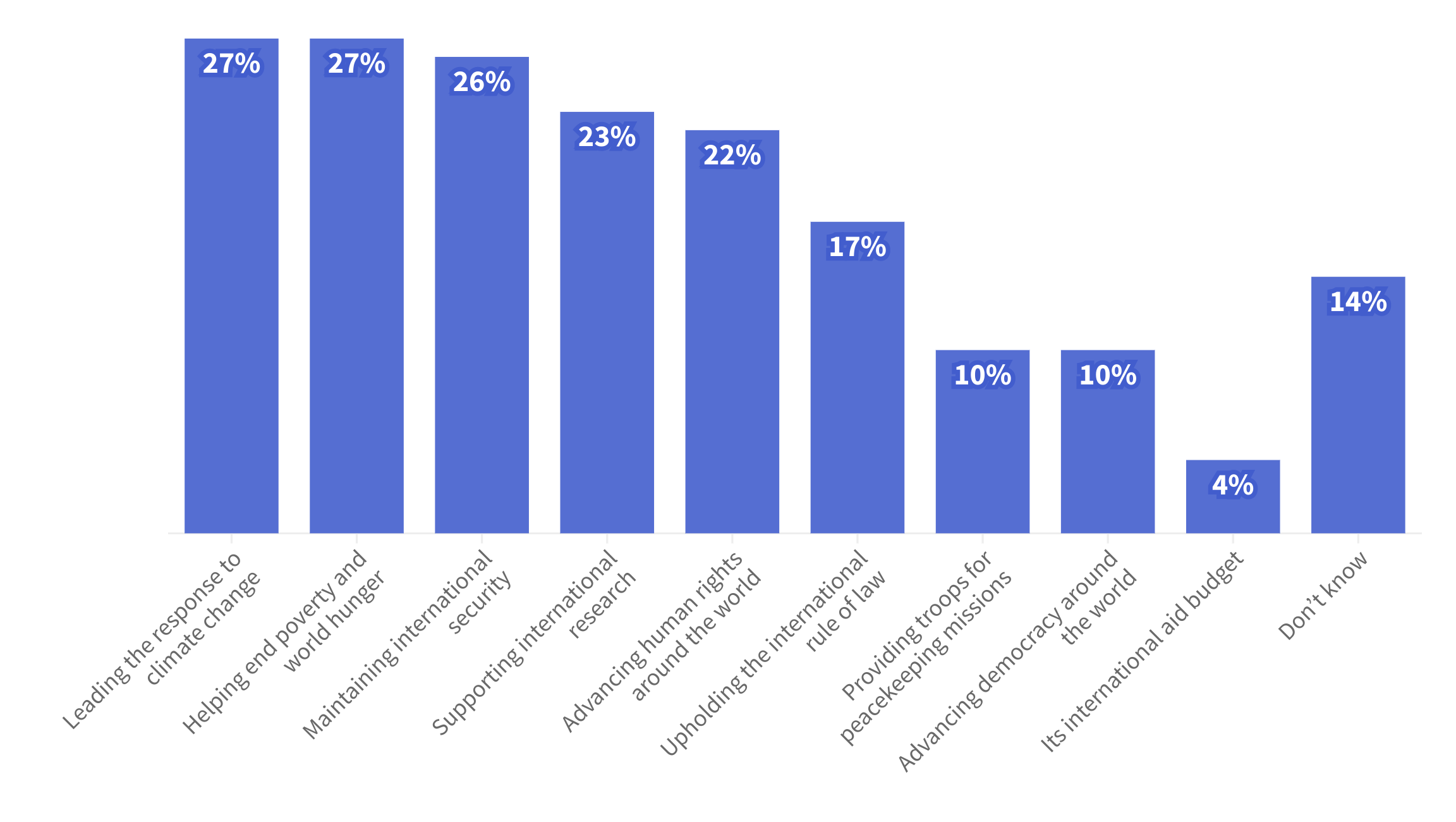 Source: Number Cruncher Analytics. Sample size was 3,004 UK adults. Fieldwork was conducted between 18 February and 8 March. This poll was commissioned by Best for Britain.

In November 2020, the Government announced the centre-piece of its green agenda, a ten point plan for the Green Industrial Revolution, which would create 250,000 jobs in renewable energy. The plan means to make use of the UK’s green potential, such as off-shore wind power capabilities, rewilding naturally carbon-storing landscapes and technology expertise.  The UK is ranked fourth in the Global Innovation Index (2020), attracting significant venture capital. Supporting green innovative research dovetails with the Government's wider ambitions for technology, outlined in the 2021 Integrated Review, which aims to make the UK a ‘scientific superpower’. The Clean Growth Strategy has for several years aimed to decarbonise all sectors of the UK while embracing the opportunities of a more circular, less wasteful economy. In July 2020, the Government promised to ‘build back greener’, committing £350 million. Clearly, the green recovery is a thread running throughout the Government policy and throughout public opinion.

Britain and Europe have committed to net zero carbon emissions by 2050 in accordance with the Paris Climate Accord. The UK has pledged a 68 per cent drop in greenhouse gas emissions by 2030, and a 78 per cent drop by 2035 compared to 1990 levels - a more ambitious target than any other major economy.

However, the Government has been repeatedly accused of publicising ambitious green initiatives but failing to deliver. The March 2021 Budget was criticised as having little detail as to how the Government would forward the green agenda. The Government pledged £1.5 billion to a flagship ‘Green Homes’ scheme to insulate homes and provide low-carbon heating. However, delays in implementation meant 95% of the fund was untouched by January 2021, and the scheme has now been scrapped.

The proposed National Infrastructure Bank (NIB) has a remit which includes the delivery of the 2050 net zero target. However, there is little detail on how loans are granted. It is also unclear whether the £12 billion pledged can match low-cost finance previously lent to the UK by the European Investment bank, which amounts to €118 billion overall. Since the NIB must also prioritise ‘levelling-up’ left behind (and electorally significant) communities, there are concerns the Government’s green agenda could be sidelined in favour of short-term priorities. The proposed construction of a coal mine in West Cumbria, championed by the Northern Research Group, is a glaring example of this tension. It is encouraging the government has launched a public inquiry into the environmental impacts of the mine.

The conflict between short-term economic growth and long-term climate action must be resolved if we are to respond properly to the climate emergency. The UK must find a way to balance competitive trade policy with its domestic and international climate obligations.

Where possible, the UK should realign its trade policy to complement and further these targets. A crucial first step is to simplify and liberalise trade with Europe. The proximity of Europe means goods can be transported by road, rather than air, meaning lower associated emissions. As outlined above, this requires consistent dialogue between regulatory bodies, investment in new diplomatic infrastructures and the political goodwill to create a comprehensive regulatory alignment agreement.

In climate policy, the UK has already shown alignment to the EU. The UK’s Emissions Trading Scheme (ETS), replacing the UK’s participation in the EU’s ETS on 1 January 2021, operates on very similar principles. But the EU plans to go one step further. Carbon border adjustment (CBA) mechanisms will be introduced by the EU by the end of 2021. CBAs would see tariffs levied proportionate to the carbon content of imported goods. CBAs are designed to prevent ‘carbon leakage’ - when companies transfer economic activity from countries and jurisdictions with strict emission regimes to those with weaker. The levy would apply to all imports unless they originated from a country with an equivalent domestic carbon price to the EU, or are made by a company able to demonstrate that its product is more carbon efficient than the EU average.

If the UK would adopt an equivalent scheme, it could demonstrate a forward-thinking, collaborative approach to hitting international emissions targets. However, with the WTO’s Appellate body unable to mitigate concerns, some worry the EU’s CBAs may be seen as backdoor protectionism. This could destabilize an already fractious global trade environment, prompting retaliatory tariff measures and further alienating the USA from multilateral trading. As Emily Lydgate, deputy director at the UK Trade Policy Observatory, said “we can tailor trade policy to our environmental goals, but that might involve restrictions, and that might cause diplomatic issues.”

Nevertheless, experts argue a proactive response to CBAs would serve the UK diplomatically and pragmatically. Sam Lowe from the Centre for European Reforms states the risk of trade destabilization is less than the risk the UK “ignores the topic, and ends up being bounced into adopting an approach designed by others if and when the EU and US introduce their own schemes”. To meet emissions targets, the UK will have to make hard choices. And if the Government was to lead on the CBAs, and implement a scheme in line with the EU’s mechanism, it could position itself as a credible proponent of multilateral cooperation and meaningful climate action.

In 2021, Britain has the perfect platform to leverage diplomatic cache from international climate response leadership. In November, the UK will be hosting the COP26 in Glasgow, the most significant climate conference since Paris 2015. The UK will also act as president of the G7, held in Cornwall in June. The government seems to already be positioning itself as a leader on climate issues. In February 2021, the Prime Minister chaired a meeting with the UN Secretary Council to discuss climate change’s impact on global peace and prosperity.

The UK can use COP26 and the G7 Summit to establish itself as a confident and collaborative actor on the world-stage. CBAs are just one example of climate action the UK could champion at these international summits. Britain could ask to join the Agreement on Climate Change, Trade and Sustainability led New Zealand. The group aims to find ways forward on three central trade and climate issues: removing fossil fuel subsidies, climate-related labelling, and promoting trade in climate-friendly goods and services. The UK should also work within the WTO to lead the charge for other member states to give their assent to a WTO Ministerial Statement on environmental sustainability and trade.

Building on the Prime Minister’s ‘five point plan’ announced to the UN in September 2020, the Integrated Review outlines pandemic preparedness as a key factor in the UK’s global stewardship. Covid-19 has not only shown the interconnectedness of the world, but the need of nations to work together. 77% of British people said covid-19 shows that countries must work together, while only 5% disagree. UK action will include increasing WHO funding by 30% to £340 million over the next four years, exploring a WHO-led pandemic preparedness international treaty and investing in genomic sequencing research and zoonotic link assessment. Leveraging the UK’s reputation for innovation and research, Britain could position itself on as a leader in health science, a global convenor and a champion of international bodies like WHO. Indeed, nearly three quarters (74%) of British people agree or strongly agree that international organisations are helpful in solving global issues, while 78% believe health crises are better solved in collaboration with other countries.

Fig.9 In general, do you believe the world’s greatest challenges in future can be best met by the UK acting by itself or in cooperation with international allies and through international organisations? 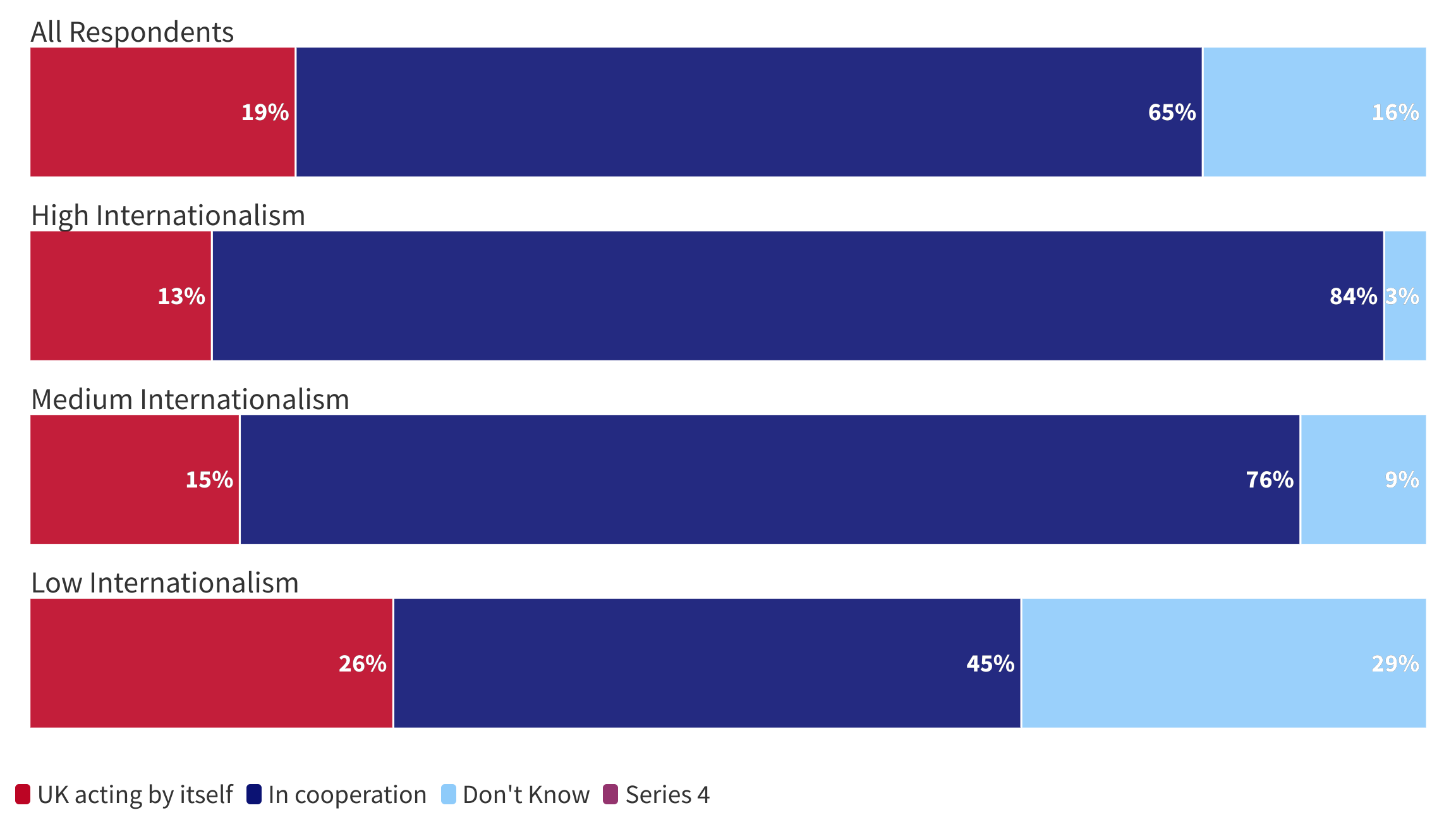 Source: Number Cruncher Analytics. The full question posed was: In general, do you believe the world’s greatest challenges in future can be best met by the UK acting by itself or in cooperation with international allies and through international organisations like the United Nations?Sample size was 3,004 UK adults. Fieldwork was conducted between 18 February and 8 March, 2021. This poll was commissioned by Best for Britain.

Similarly, 79% agree the UK should work with international bodies to solve climate change, including 53% of the least internationalist group.

Currently, the Biden administration presents a diplomatic challenge to the Government. The Prime Minister’s closeness to Trump, the threat to Northern Irish stability posed by the Internal Market Bill, and the Brexit project as a whole, have reportedly made President Biden wary of the Government. A bilateral trade deal with the US, which seemed likely under the Trump administration, now seems more distant. Biden has positioned his administration in opposition to Trump’s climate scepticism, rejoining the Paris climate accord within hours of his inauguration. British leadership on climate action would signal distance between the government and the Trump administration, while demonstrating support for Biden’s multilateral approach to diplomacy. In this way, the G7 summit and COP26 could prove important in overcoming tension with the Biden administration, and potentially opening up a profitable avenue of bilateral trade.

Fig.10 Do you think the UK should or should not cooperate with international bodies to tackle climate change? 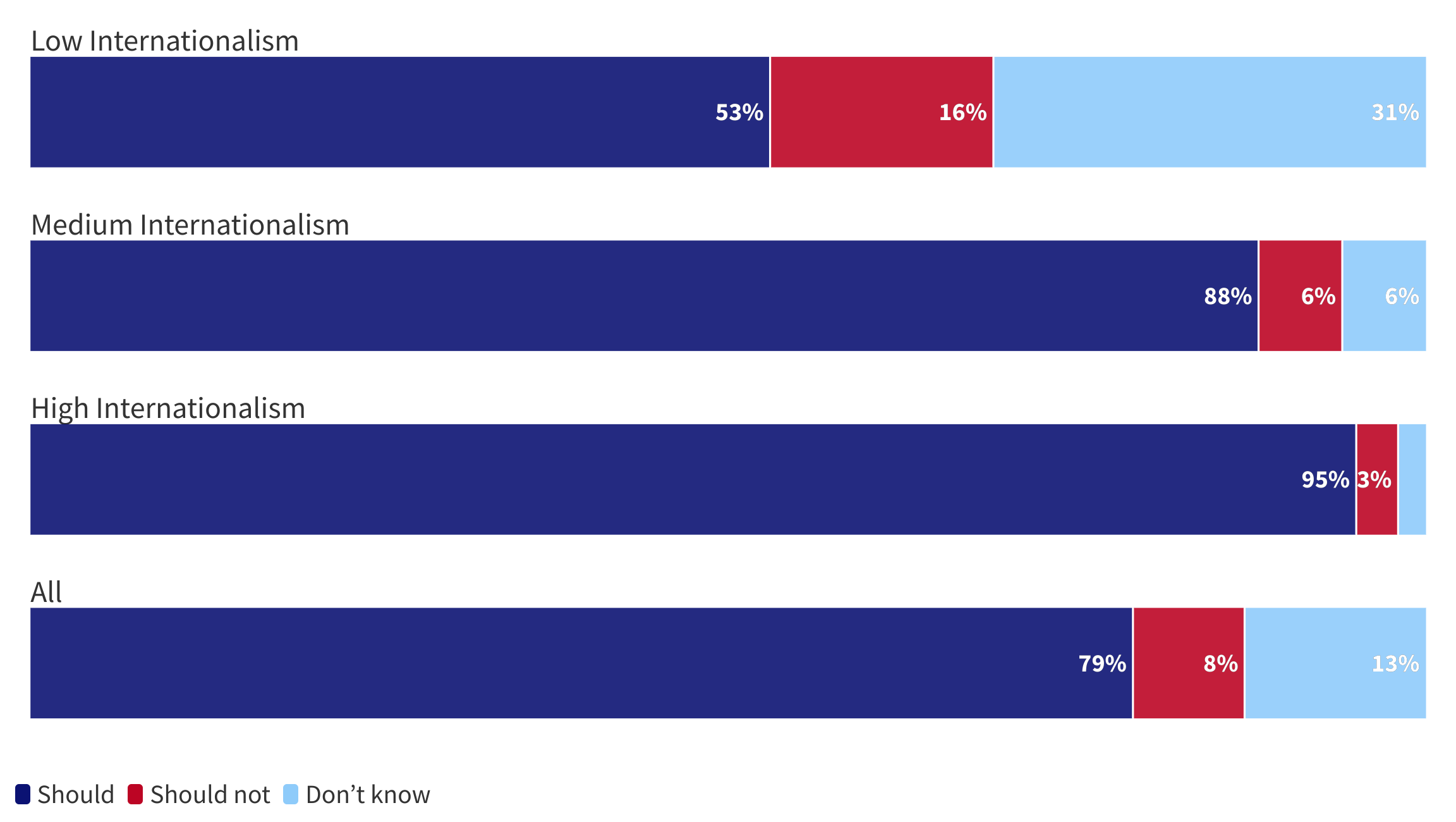 Source: Number Cruncher Analytics. The full question posed was: Do you think the UK should or should not cooperate with international bodies in the following areas: Climate change. Sample size was 3,004 UK adults. Fieldwork was conducted between 18 February and 8 March. This poll was commissioned by Best for Britain.

As outlined in the trade policy section, the UK finds itself in a precarious position on the world stage. Britain is caught between the competing interest of America and China, without the support of the EU to leverage their position and broker contentious areas of trade. But with the domestic and international consensus emerging around a green recovery from COVID, the UK’s roles in COP26 and G7 are a unique opportunity to lead on climate issues, and to reassert Britain’s scientific and diplomatic credentials after a damaging year.

Just as the UK must maintain a blameless record on human rights in order to legitimately castigate China and uphold the rules-based international system, obvious inconsistencies between the UK’s domestic agenda and climate leadership will not go unnoticed by the allies we hope to influence. On March 12, 2021, John Kerry, the United States Special Presidential Envoy for Climate, commented on the UK’s proposed coal mine in Cumbria, saying “the marketplace has made a decision that coal is not the future”.

Equally, as the UK’s trade and foreign policy ambitions hinge on the ‘tilt to the Indo-Pacific’, including the requested accession to CPTPP, the government must be mindful that trade policy does not contradict their climate rhetoric. China is central to the Integrated Review’s ambitions in Asia, yet is also the biggest carbon emitter in the world. China’s pledge to reach “peak carbon” by 2030 and virtual net zero by 2060 was welcomed by the international community, but there was scepticism as to whether it could transition from such a heavy reliance on coal. The targets also remain out of step with the Paris Climate Accord’s recommendations, which are required to prevent catastrophic global heating. The UK must balance the benefits of the ‘Indo-Pacific tilt’ with its domestic and international responsibilities, and consider whether European trade would better complement their foregin policy and climate goals.

In 2021, Britain should demonstrate to its global partners not only a domestic commitment, but a multilateral approach to solving the climate crisis. This will help fulfill the second and third ‘pillar’ of the Global Britain strategy, freeing trade and establishing the UK as a force for good on the global stage. The UK must use its position to meet global challenges, not merely to respond to the climate crisis but to establish itself as a leader in trade, science and world stewardship.